LATEST NEWS
You are at:Home»Article»It’s all in the timing – By Andy Crook of GotBoost

Engines, like jokes, only work if the timing is right. Fortunately, it’s easy to check an engine’s timing, but it can be time consuming. A local garage asked if we could confirm a suspected timing issue on a 2.2 turbo diesel Ford Transit. We asked why they wanted us to check it and it became clear that they had somehow misdiagnosed a problem. 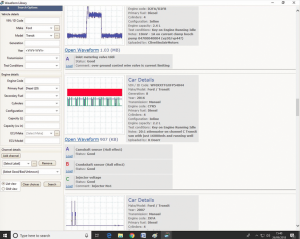 They appeared to have followed a reasonable diagnostic routine, including some oscilloscope work, but didn’t have the ability to compare the trace with a known good waveform. We confirmed the stored Diagnostic Trouble Code P0341 which would return as soon as the engine started after it was cleared.

There were no obvious running issues and the previous garage had replaced the camshaft sensor with an OEM part. They had checked both camshaft and crankshaft sensor outputs with
an oscilloscope and confirmed they both produced a square waveform.

Checking the engine timing using an oscilloscope is a straight forward enough task, but only if you have a known good waveform to compare it with. This is where the Pico waveform library is extremely useful, but it does require populating. If you do use this resource, can I please ask you to make deposits if you intend to make withdrawals.

Once you’ve logged in, you can use the search function to find the specific make, model and even engine code. This is where technicians can really help others by uploading known good waveforms with as much supporting information as possible. Having entered some details, the selected waveform can be downloaded to your computer by clicking the Open Waveform Icon.

In this instance, we were lucky enough to have a known good waveform to compare with our troublesome Transit.

It is then displayed on your screen as if you have captured it yourself and you can manipulate the waveform using all of the Pico tools, such as the commonly used zoom and filter functions. There are many more features built into the software to enable further analysis.

This engine uses Hall sensors for both the camshaft and crankshaft sensors. Hall sensors produce a square waveform to represent engine speed (frequency) and position (rising and falling edges). As the waveform changes with engine speed, it is difficult to use a reference waveform to compare the known good trace with the problem vehicle. For the waveforms to overlay perfectly, the engines would need to be rotating at exactly the same speed.

This is where a tip picked up at a Pico Roadshow came in handy. A feature in the measurement software allows technicians to count the number of rising or falling edges either across the whole trace or between rulers. 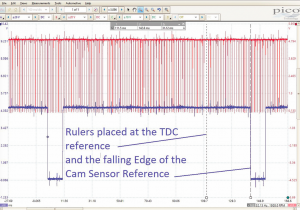 Zooming into one engine revolution of the engine for clarity and placing rulers at the TDC reference of the crankshaft sensor and the falling edge of the camshaft position reference means the software can count the number of edges between these two points, see Figure 2. This measurement should not change even when the engine speed changes. This would provide a means to compare the two waveforms quickly and accurately at all engine speeds. Useful if you have a non- starting vehicle and known good waveforms from a running vehicle. 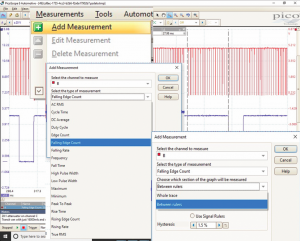 To add a measurement to your waveform simply click the Measurements tab in the task bar and click ‘Add Measurement’ in the drop-down menu. In this case we wanted to measure the number of falling edges on Channel B between the rulers, see Figure 3.

Results are displayed in a window at the bottom of the screen. The known good waveform had 23 falling edges between the two rulers. The vehicle in question had 25. 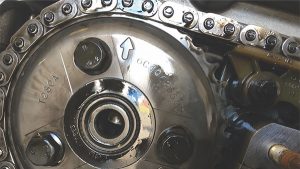 By counting the number of falling edges per engine revolution we can calculate how far out the timing is in degrees. If there are 58 falling edges, plus the two missing for the TDC reference, then each edge represents 360/60, or 6 degrees of crankshaft rotation. This engine is at least 12 degrees out. This is almost certainly the reason for the DTC being flagged and provides the evidence required to start removing the engine covers. Once they had been removed, the camshaft bolts had to be slackened to allow the timing pins to be inserted.