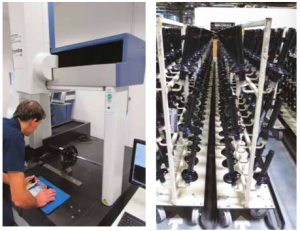 KYB Corporation is Japan’s leading manufacturer of hydraulic products and produces around 57 million shock absorbers each year for OE and aftermarket customers around the world. Its technology can also be found in aircrafts, and marine vehicles and it has developed dampers, used in Japan’s skyscrapers to keep them standing when earthquakes strike.

Autotechnician, alongside other journalists from across Europe, gathered at its newly expanded shock absorber plant just outside Prague in the Czech Republic to witness its manufacturing expertise and to preview two workshop initiatives that should help justify suspension work to customers.

We are shown around its shock absorber and coil spring plants and its clear to see absolute precision is demanded from staff, tooling and processes, with Original Equipment and aftermarket products being produced on the same manufacturing lines.

Over the past year, KYB has conducted extensive research among its European workshop customers and within focus groups around the UK so the company could better understand the needs of the end user. Technicians and workshop owners were asked by an independent adjudicator for their opinions on the aftermarket in general, steering and suspension work and suggestions for what could make their lives easier. One comment was mentioned time and time again, workshops felt they needed help to explain the risks of driving with defective shock absorbers as the gradual decline process makes it a hard sale to customers. KYB has developed two new tools to educate customers and justify suspension work. 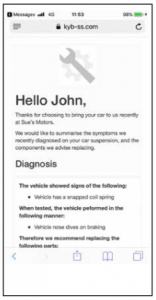 The KYB Suspension Solutions App will help workshops explain to customers why their shock absorbers need replacing and can be easily customised by each garage using it. It is available to download for free from the App store and Google Play.

The text message received by the customer explains what issues have been identified with their vehicle’s suspension and which components need to be replaced. It also links to video clips which explain the dangers and risks associated with worn shock absorbers, coil springs, mounting and protection components. The app can also be used to show the completed repair, with a before and after photo of the work carried out.

The App was developed to explain the safety critical role which shock absorbers, coil springs, mounting and protection components play on a vehicle. Marketing Manager, Jordan Day, explains: “Feedback on the demo version was extremely positive and I am confident that this new mobile App will support our garage customers, helping them raise their profile with their customers and increase their sales”.

If motorists could go on a test track and experience the difference in handling with new and defective shocks, there’d be no problem selling suspension work – KYB has entered the world of virtual reality to provide the next best way to demonstrate the dangers of worn shock absorbers.

Viewers can use special VR glasses to watch the 360⁰ safety video where they will experience a product test of old versus new shock absorbers. The video uses the new virtual reality mode feature offered by YouTube and allows the viewer to turn their head in any direction as if they were in the car with the driver. *We’ll be giving away free headsets in the coming weeks via our Facebook page so you can experience this for yourself.

The video shows two identical vehicles doing a slalom test to evaluate the steering and control of the vehicle at 50kph and an emergency braking test at 70kph. One vehicle has covered 80,000km and has worn shock absorbers, the other has new KYB shock absorbers.

Marketing Manager, Jordan Day, comments: “I was the driver of the vehicles used in this test, and I was surprised just how dramatic the improvement in handling and control was with the new shock absorbers. I urge technicians to recognise when shock absorbers need to be replaced and to use this video to help their customers understand the dangers of worn shock absorbers”.

KYB will be giving garages cardboard VR glasses in order to share the 3600 viewing experience with their customers.