LATEST NEWS
You are at:Home»Article»Matt is reminded that’s it what you do know that is important

A 2004 VW Lupo 1400cc petrol was booked-in with us for an intermittent non-start, poor running fault, which brought on the engine management light. After the obligatory question and answer session with the customer, I thought I had enough detail to begin my investigations. A code scan revealed a fault code for an air pressure fault within the inlet manifold. As this matched the customer’s description of the symptoms, and was the only code present, I began down this route of enquiry. 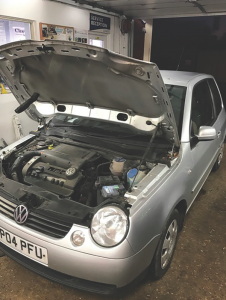 On test driving the vehicle, I noticed no obvious driveability faults and couldn’t recreate the symptoms. Back in the workshop, the non-starting fault wouldn’t reoccur. I checked the MAP sensor reading data within the ECU, which was fine, while scoping the sensor signal output on the engine, which matched the values the ECU was seeing. Having experienced this kind of fault on previous Golfs and Polos this popular engine is fitted to, I turned my attention to the throttle body. Having covered 160,000 miles, although being regularly serviced, the throttle body was badly carboned-up, so I removed it and gave it a thorough clean.
After refitting, I checked the throttle valve actuation using our scan tool and reset the throttle ‘learn values’. A further test drive was problem-free, so I briefed the customer on my findings and repairs and he collected the vehicle.
Within a week, you guessed it, the Lupo returned. Further questioning of the customer revealed that although the car generally started and ran better, the intermittent non-start was present but after a 5-minute wait, would always restart and not reoccur on the same drive cycle. Focusing on the non-start events, I narrowed it down to it not starting once driven under two miles or after refuelling.
A useful video taken by the customer on his phone (my suggestion if the fault reoccurred) showed me that when the fault occurred, it would crank and attempt to fire, then stall. With fresh evidence, I re-ran the fault code check, with only the same code present. I also carried out component activation tests on any item related to the inlet manifold. My suspicions lay with the EGR valve, but, as usual, whilst at the garage, the car was fault-free. Conscious of rising costs, and with no obvious fault present, I sent the car away with a ‘flight recorder’ tool fitted to the OBD connector.
This clever device records every journey, saving OBD data on each trip and highlights journeys where an error code has been stored. Eventually, the fault reoccurred and I studied the OBD data.
From the recordings, which although not showing any failings by a component, did show which items were reading correctly, e.g. coolant temp, throttle valve position, and confirmed an unusual MAP value, with excessive oxygen present. It had to be a mechanical fault of a component, which has a direct link to the inlet.
I removed and inspected the EGR, but it wasn’t dirty and activated off the car reliably every time. So, I removed the purge canister solenoid and bench tested it with a Mityvac on the diaphragm, whilst activating it. 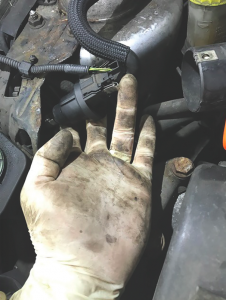 After around 50 vacuum/release cycles, the solenoid valve stuck open, but only once. The next 25-30 cycles it was operating correctly! The customer had mentioned the fault occurred after refuelling, so I decided to replace the purge canister solenoid (for the first time in my 20-year career), as the effect of it sticking open results in air being drawn through the canister, from the filler neck and into the inlet manifold. We did this repair two months ago and there has been no recurrence of the
non-start fault.
The most important factor when attempting any diagnostic work is to gather as much information as possible from the customer and the vehicle. This enables you to carry out informed and educated testing of the components that can cause the fault.