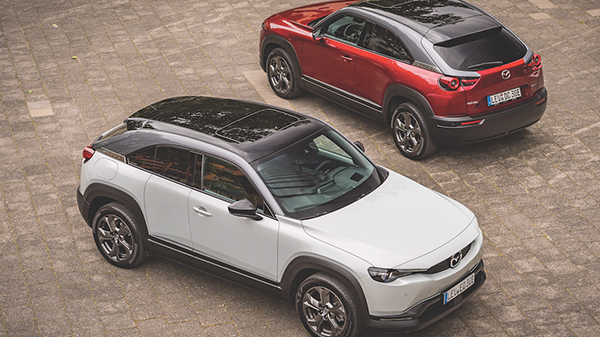 It is a brave stand to break from the technical establishment, a reason why Rob Marshall finds Mazda’s new MX-30 to be a refreshing diversion from the EV ‘norm’.

It is hard not to respect a car manufacturer for its integrity, especially in the current climate. Since Ford sold its stake in Mazda, the staunchly independent Japanese manufacturer has continued its heritage, by ploughing a different technical furrow for the greater-good.

As history shows, Mazda persevered with making the ‘Wankel’ engine dependable, a power unit that contributed significantly to the bankruptcy of Citroën and the takeover of NSU by Volkswagen in the 1960s and 1970s. Without major alterations, it made a productionised rotary engine run on hydrogen and its future is being investigated as a compact battery range- extender. Mazda also produced the first Miller cycle engine in the 1990s, a decade that saw its MX-5 establish itself as an icon in its own right. More recently, the company has engineered its own emissions-saving hardware. For example, instead of employing an expensive AGM (Advanced Glass Mat) battery for its regenerative braking i-ELOOP variable-voltage alternator, a less expensive 12v EFB (Enhanced Flooded Battery) is used, with a separate 25v capacitor that utilises no toxic heavy metals in its production.

Instead of knee-jerking to electrify everything in sight, Mazda has studied the Electric Vehicle’s whole lifetime environmental impact, before introducing its first EV. The corporation anticipates that combustion engines will power 95% of cars it produces by 2030, probably with hybrid-electric assistance, because it believes that liquid fuel will remain dominant until 2040, which makes uncomfortable reading for some politicians. The firm has posited a bold multi-solution environmental strategy that includes the continual development of combustion engines to either equal, or better, the real-world cradle-to-grave emissions of EVs. It is not only developing CO2 neutral fuels but also the SKYACTIV-X Spark Controlled Compression Ignition four-cylinder engine, which combines very lean air/fuel mixes with high compression ratios. Mazda insists that it not ignoring its environmental obligations – far from it – but it refuses to abandon its philosophy of offering affordable cars that people want to drive.

As Mazda’s first EV, the MX-30 appears out-of-step on paper. Firstly, it delivers an unimpressive 143bhp (and 271Nm/200lbs ft of torque) to the front wheels, through a transversely-mounted differential. The resultant 0 62mph in 9.7s and a limited 87mph maximum are unlikely to satisfy the performance enthusiast, while the 124-miles range is also around half the EV ‘norm’, which is likely to restrict its appeal among typical buyers, who think (incorrectly) that all electric vehicles must be environmentally sound. However, it is unfair to slam the MX-30, based on data alone.

Mazda’s research, in conjunction with the Tokyo-based Kogakuin University of Technology and Engineering, showed that EVs with substantial high voltage battery packs are, ironically, counter-productive in environmental terms. EVs with large batteries are responsible for significant CO2 emissions, whereas smaller batteries deliver fewer greenhouse gases than equivalent-sized diesel cars, when the whole cradle-to- grave lifecycle is considered. As a result, Mazda believes that its MX-30 strikes the ideal balance between performance and sustainability, especially as most people cover fewer than 70 miles daily and a smaller battery takes less time to recharge. Whether these are sufficient reasons to persuade the market remains to be seen.

Yet, Mazda bets its MX-30 is superior to drive than its rivals, something that figures alone do not reveal. The 35.5kWh Panasonic-sourced lithium-ion power-pack is lighter than the bulkier items that power the MX30’s rivals, providing dynamic benefits, something Mazda states is not the case for many of today’s EVs. By comparison, the Chinese MG ZS EV has a 44.5kWh item but is 170kgs heavier, while Germany’s Volkswagen ID.3 (See AT’s April issue) can be specified with 45, 58, or 77kWh power packs but weighs around a spec- dependent fifth of a tonne more than the Mazda.

As the MX-30’s monocoque lacks a B-pillar, the battery frame is bolted beneath the floor to enhance structural rigidity, but the bodyshell neither amplifies, nor distorts forces transmitted by the suspension. Using experiences gained from the Mazda3 hatchback and CX-30 SUV, the familiar conventional MacPherson Strut front and torsion beam rear set-up features, with bushes and damper settings tuned to the new EV application. Aided by the relatively lightweight battery pack, handling neutrality is augmented electronically but not only by a conventional friction brake-based anti stability system. Algorithms, programmed into the main drive ECU, can vary the motor’s torque subtly, dependent on steering angle and not just accelerator pedal position. Both tyre grip and weight transfer can, therefore, be manipulated smoothly to improve dynamics, particularly on twisty routes, or low-grip surfaces.

The brakes operate fly-by-wire technology, without a physical connection between the brake pedal and master cylinder. Mazda’s software refinements enhance brake pedal feel, while many EVs possess ‘dead’ and ‘grabby’ friction brakes. However, a fail-safe mode allows the brakes to be applied (albeit without power assistance), should the electrical system fail.

SEE NO EVIL, HEAR NO EVIL, SPEAK NO EVIL…

A common critique of EVs generally is that they benefit wealthier nations at the expense of poorer ones. The mining of cobalt for high voltage battery packs (and mobile phone tech – Ed) is associated with severe human rights abuses, especially in the Democratic Republic of Congo, which produces around 60% of the world’s supply. Reprocessing the spent battery packs is also highly energy-intensive but economically unviable, the current EU legal limit for recycling high voltage packs is only 50% by weight. Sadly, the MX-30 does not appear to provide solutions to these inconvenient truths, aside from the relevant point that a smaller battery demands fewer precious resources to produce and recycle. Disappointingly, Mazda would not elaborate further on these subjects, at the time of writing, restricting its responses to AT as:

“We trust our suppliers to ensure the ethical correct sourcing for their products… in regards to recycling, we are currently investigating recycling companies with specialised technologies, and our policy is to avoid causing environmental impact and accidents with the batteries, in line with the laws and regulations of the destination market.”

WILL THE GAMBLE PAY OFF?

The MX-30 is due to be introduced to the UK in March 2021, with prices ranging from £25.545 to £32,845, inclusive of the Office for Low Emissions Vehicles grant. Yet, the ‘elephant- in-the-room’ is range anxiety and, regardless of Mazda’s sound environmental justification and logic, will the market be convinced? If it is not, Mazda may have to return to the drawing board, and it would be a great shame if it is forced into following-the-herd to gain commercial acceptance.

Summary: The MX-30 complies with the current trend for small, fashionable SUVs. Behind its seemingly unremarkable statistics lies a handsome EV, true to its Japanese roots that makes an ‘honest’, reasoned and critical statement about why competing EVs are not exactly the environmental saints that they purport to be.