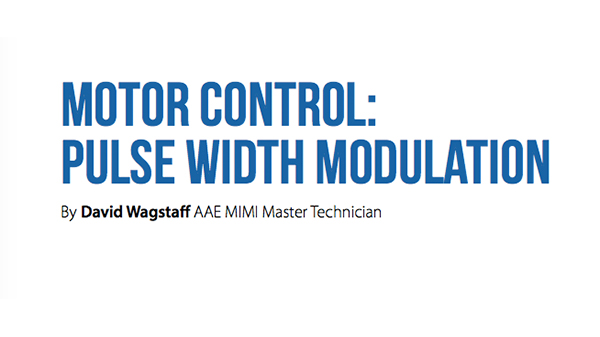 In the last article, I looked at why circuits are ground switched using transistors. I now want to move on and talk about methods and strategies used to control things like motors and solenoids that are not either on or off but have variable control in between. I’m talking about fan motors, fuel pressure solenoids and electric fuel pumps etc. 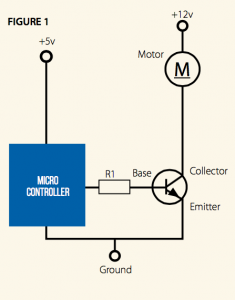 Last time I talked about how a transistor could be used as an amplifier. The most obvious way to control the speed of a motor would be to have a variable voltage output from the Microcontroller driving the control transistor to produce a variable current flow through the circuit as in Figure 1. This would give us variable speed, but it does have a few disadvantages.

The first is cost. Manufacturers are always trying to save money on the production of cars and Microcontrollers with a variable voltage output, rather than a digital on and off, are more expensive. So, a method of getting variable output from a simple on or off output would be great.

The second issue is efficiency. By using a transistor in this way, what we are effectively doing is creating a variable resistance in the circuit. The resistance will have a voltage drop across it and that voltage drop will dissipate energy in the form of heat. The speed of a DC motor is proportional to the voltage applied to it so, if we want the motor to run at half speed, we need to supply the motor with 6 Volts instead of 12. With 6 Volts across the motor in a 12-Volt circuit means the transistor will have a voltage drop of 6 Volts across it too. Imagine the fan is drawing 10 Amps. Using Watt’s Law, we can work out the power dissipated by the transistor. Watts = Voltage x Amps, so Watts = 6V x 10A or 60W, about the same as a headlamp bulb. That’s a lot of heat to get rid of from a control unit that may be hidden behind the dash somewhere. Energy in a car can only come from burning fuel, so any wasted energy means extra fuel and higher emissions, something all manufacturers are trying to reduce.

The third issue is that motor torque is directly proportional to the current flowing through the circuit. From Ohms Law we know that current and voltage are linked, so lower voltage also means lower current and therefore lower torque output from the motor. At low voltages there will come a point where the torque output of the motor isn’t high enough to drive the load, so the motor will stall, not great for a blower motor that you might want to run quite slowly at times.

So, what is the answer? If only we could run the motor at full voltage and full current but still control the speed. Well, thankfully there is a method of motor control that addresses all these issues, it’s called Pulse Width Modulation (PWM). With PWM, the motor is switched on and off at full voltage and current rapidly, somewhere in the area of 200KHz or around 200,000 times per second. This can be done from a single on or off output at the Microcontroller, and because the transistor is either on or off, there is little heat dissipated from voltage drop. The on/ off switching is quick enough that the inertia of the motor keeps the movement smooth. 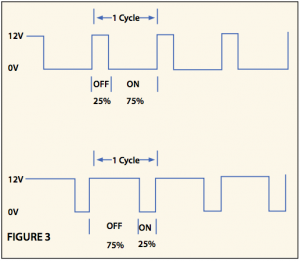 The ratio of ‘on time’ relative to the ‘off time’ is known as the Duty Cycle and is measured as a percentage of the ‘on time’. If the motor was off, the Duty Cycle would be 0%, at full speed 100% and at half speed 50%, see Figure 3.