With many issues reportedly being caused by incorrect fitting, Rob Marshall looks at how the workshop can avoid shortening the life of replacement parts and gives an overview of clutch faults and their common causes.

While they admit that manufacturing issues can occur, the warranty departments of quality clutch manufacturers check their returns carefully and damage that has been caused by incorrect fitting tends to be more common than production defects. Therefore, it is unreasonable to expect any supplier to cover clutch parts that have been damaged in the workshop.

Before you place a parts order, discussing the problem with the car owner helps to avoid misdiagnosis. A frank discussion will help assess when the fault(s) occurred, the symptoms and frequency. While being careful not to cause offence, explain that modern cars can mask unsympathetic driving techniques quite effectively and consider offering advice so that the driver can understand that he/she plays a role in determining the life of their vehicle’s clutch.

When checking the car over, consider if any ancillary components might be at fault, such as visible hydraulic

system leaks, air in the system, or an incorrectly-adjusted release mechanism. Only after these basic checks have been completed, should you embark on changing the three-piece clutch.

ZF Service’s Sachs brand reveals that plenty of opportunities arise for the clutch to be damaged, prior to it being taken out of the box. Impact forces can bend the side straps (also called the Tangential Spring) on the cover/pressure plate, for example. Sachs told us that its pressure plates have a slightly concave surface to aid bedding in, so if your checks reveal it not to be flat, this is not a defect. The friction plate can also distort by being dropped. National Auto Parts adds that impact forces can chip away some of the friction lining; this creates a weak point and risks the whole section breaking-up in use. Should your kit include a concentric slave cylinder (CSC), National Auto Parts and First Line’s Borg & Beck advise that you should not be tempted to compress it by hand, because this risks damaging the internal seals, rendering the part useless. 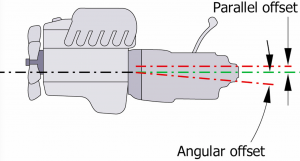 1. Keeping on the straight and narrow

As the gearbox input shaft is a natural extension of the crankshaft, it must be aligned on the same axis. If it is not, the clutch will be pulled out of line, reducing its lifespan. Consider also that should the weight of the gearbox be supported solely by the input shaft, the clutch friction plate is designed to be sacrificial. Otherwise, ensure that all mating surfaces are clean and that nothing becomes trapped between the bellhousing and crankcase. All locating dowels must be present and in good order, as must all bolts. Should it be present, a damaged pilot bearing, or spigot bush, can promote offset, too. 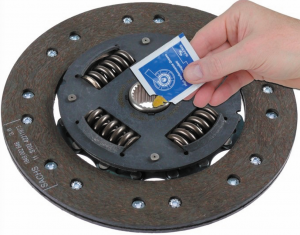 While friction plate linings are designed to operate best between 90-120 degrees Celsius, driver abuse (or wear/a fault) can result in a damaging 400-600 degrees Celsius being experienced. Therefore, copper and multipurpose greases can bake onto the input shaft, causing judder. Do not presume, however, that the input shaft splines and clutch hub do not require lubrication; they do. Sachs advises that its own grease, which is supplied with its clutch kits (or otherwise, under ref no: 18 4200 080 060), is used, which not only remains stable at high temperatures but also repels lining dust.

A further problem is applying too much, the excess of which is thrown onto the friction linings, causing slip. Therefore, apply a minute quantity and distribute it, by sliding the clutch plate back and forth several times on the splines, prior to removing the excess grease. 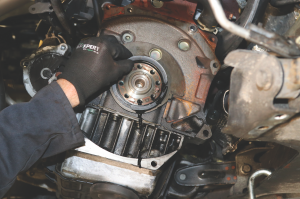 3. Leaks and their consequences

Aside from incorrect/excessive input shaft greasing, look for and attend to oil leaks from the input shaft or crankshaft seals that could contaminate the friction lining. While any CSC should be replaced as a matter of course, establish if any brake fluid leaks from the component may be the cause of clutch issues. Clean the bellhousing thoroughly, so that any debris from the previous clutch failure cannot affect the new one. 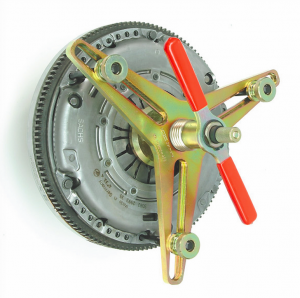 Sachs reveals that around 40% of its clutches that are returned under warranty with a disengaging complaint, possess distorted pressure plates. It highlights that its XTend self-adjusting clutches seem to be particularly vulnerable to poor fitting techniques, demonstrated by the automatic adjuster on returned clutches being extended fully, which cannot be reset. This demonstrates that they were not installed with the correct tool. Note also that LUK adopts the same technical stance, insisting that its Self-Adjusting Clutches are installed only with an appropriate fitting tool, which applies pressure evenly to the centre of the pressure plate, so that its retaining bolts can be tightened. More information can be found on www.autotechnician.co.uk by searching ‘clutch repair’. Borg & Beck also recommends that these installation tools are used. 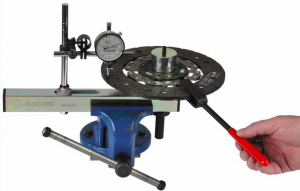 While you may not have the facilities (or time) to use the pictured method to check if the lateral run out of a new friction plate does not exceed 0.5mm, spinning it on a metal bench and checking that the edges do not rise and fall obviously is a quick and easy test. Distortion, noticed in two positions that are 180 degrees apart, is evidence that the gearbox weight has been suspended unsupported by the input shaft.

Clutches experience a myriad of faults. Hopefully, you will diagnose ones that are caused by wear and tear and not as a result of incorrect fitting procedures. Sachs, Borg & Beck and National Auto Parts share the most common faults and the most likely causes: 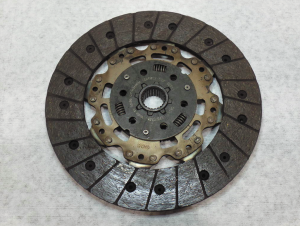 An overheated clutch friction plate can cause the facings to glaze; this changes their properties and can promote further slippage. The plate can also deform, hindering disengagement and causing drag.

As highlighted earlier, the irritating lack of a smooth transfer of power can be caused by a deformed pressure plate that might have been dropped prior to installation. Overheated, or oil contaminated friction linings, can also be to blame, as can damage to the splines that prevent the clutch disc from moving along the input shaft smoothly. A pressure plate that has not been centralised, has had its attachment screws tightened in a cross-wise sequence, or damaged during transit (look for deformed straps) can be responsible. Engine mounts that are delaminating, or softened by oil contamination, are also potential causes, as are faulty/worn/seized release mechanisms.

Insufficient clamping force can be caused by a three-piece clutch kit having reached the end of its life, exhibiting worn friction material and a self-adjusting pressure plate that has reached its adjustment limit, where applicable. A heavy pedal on non auto-adjusting clutches is a further symptom of a worn-out friction plate. External influences include oil contamination on the friction lining, or burnt linings from aggressive driving techniques. Poor fitment can cause maladjustment (high preload) between the clutch release bearing and the pressure plate. Look also for faults in the release mechanism itself, including a restriction that does not allow the fluid to flow back as the clutch pedal is released. 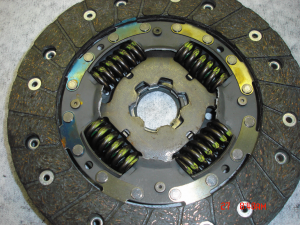 Misalignment during fitting can have serious consequences, even if failure does not happen immediately.

Deformation/excessive lateral runout of the friction disc, lack of, incorrect, or excessive lubrication on the hub/input shaft splines, damaged splines, a fractured clutch plate, bent pressure plate straps and damage to the pressure plate spring tips/fingers that has been caused by the release bearing not operating centrally, are all issues that can be caused by poor fitting techniques and damaged/incorrect parts being used. Driving techniques influence this, too, including overheating the pressure plate by excessive slippage, or a damaged torsional vibration damper (located within the friction plate, if a DMF is not installed) resulting from high loads and low RPMs. Do not forget to check the release mechanisms, too, especially if air has contaminated the system.

Some noises might not be the fault of the clutch; the sound might originate from a worn pilot bearing/spigot bush. Some noises that may stem from the three-piece assembly may not be detrimental to its lifespan, or operation, but use your judgement carefully. The slight rattling from the springs on the friction plate’s vibration dampers will be very different to the grinding sounds from a seized release bearing, for example. Be wary if noises result after a clutch change exercise. If any are noticed, double-check that the correct parts were installed and the fitting procedures were followed. 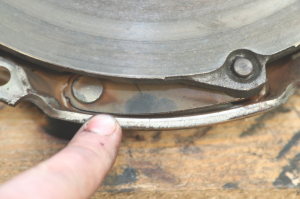 Pressure plate straps can bend, or deform, should the part be dropped. Inspect them carefully before fitting the clutch to the car.

Whether hydraulics, or a simple cable is employed, Borg & Beck strongly recommends that the clutch release system is one of the most important systems to inspect. Wear, or seizure, can lead to faults that may be blamed incorrectly on parts within the bellhousing, when there could be a simpler and less costly cause. Should the gearbox be out of the car, do not ignore worn ancillary items within the bellhousing, such as a clutch fork and guide tube, more information can be found on www. autotechnician.co.uk by searching ‘Clutching at Bits’. With CSC, National Auto Parts advises that they should not be lubricated prior to fitment, because this can damage the seals. You must ensure that the retaining bolts’ torque figures are observed, otherwise the back plate of certain CSCs can separate.

Additionally, Borg & Beck recommends caution during the bleeding procedure, because failure results from pumping the clutch pedal too rapidly. This must be done slowly and steadily. Should the pedal be pushed too quickly, the CSC does not get time to return to its original position before the next pedal push. A similar issue arises, if using too high a pressure setting on a one-person bleeding tool.

Never attempt to modify the hydraulic circuit either, such as removing a standard-fit torque limiting valve. Borg & Beck states that doing so can damage the transmission, the drive shafts, or the DMF. Again, when bleeding the system, ensure that it is performed in a slow and steady manner. Similarly, do not remove any anti-vibration units from the hydraulic system, because it prevents pulsations from the engine/transmission from being transferred into the clutch hydraulics.

The following poor driving habits shorten the life of a typical clutch: 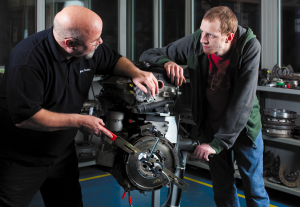 As cars are evolving, so is clutch design and materials. Sachs revealed there is a clear need for technicians to develop their training and maintain best practices in the workshop. ZF Services, therefore, provides the aftermarket with OEM-level training at its HQ in Crick, Northamptonshire. While the next course is scheduled for 11th September, more information can be found at www. zf.com/uk

National Auto Parts reports that its sales representatives offer customer training during their visits. One-to-one, or group training, can be conducted at its technical department and the company advises to contact one of its sales team on 01773 527210, to arrange an appointment. LuK’s team of technical experts conducts clutch training at technical evenings and trade fairs around the country, on top of more formal training courses at its REPXPERT Academy in Hereford. Installation videos can also be watched via Schaeffler’s REPXPERT portal www.repxpert.co.uk, as well as its newly-launched app.