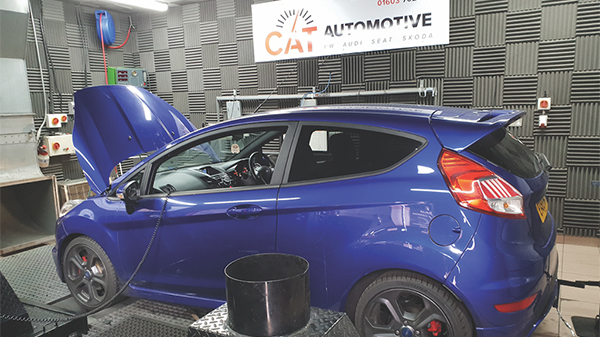 We were asked to investigate a problem Ford Fiesta ST 1.6 turbo. The customer had recently purchased the car second- hand and had immediately experienced problems – the car would go into limp home mode with the engine warning light coming on, making the car difficult to drive. Initially, the car was booked into the local Ford main dealer to investigate the fault. Our involvement came after the dealer had failed to fix the fault despite having changed multiple components including the air mass meter and manifold pressure sensor, they’d also stripped out and checked the intercooler. This process had taken five weeks and had left the customer very frustrated.

Our initial assessment of the vehicle revealed a fault P006A-62-6C Manifold Absolute Pressure Sensor – mass or volume air flow correlation, which probably explained the parts that had been replaced as they all related to air mass, air flow and manifold pressure. On a road test, we were able to replicate the fault when driving at part load just as the vehicle came onto boost. Back in the workshop we conducted an inlet pressurised smoke test to prove the integrity of the inlet system. The air mass meter and inlet manifold pressure sensors were tested on our PicoScope for any errors, they all tested OK and were working correctly. Having tested hundreds of these vehicles on our rolling road and modifying quite a few, we decided to carry out power testing to see how it performed and if it had been modified.

After testing, we could immediately see that this car was not standard and had some form of engine software installed. We were suspicious that this modification was causing the default running issue; there was quite a spike in the torque curve and the car was running lean at this point (Blue Line is the original software). To prove this, we reinstalled the standard factory software and re-tested the car on the rolling road.

The results were immediately apparent with a much smoother power and torque curve, plus no default running mode. After extensive road testing we were happy to report back to the customer that his car was fixed. Total time taken, two and a half hours.

We are seeing more faults of this nature where poor software modifications are causing or, worse still, masking underlying faults, making diagnoses difficult, especially where fault codes that we would normally see, and aid diagnoses, have been written out of the software. A combination of methodical testing and the added advantage of testing on our rolling road helped us locate the cause quickly.