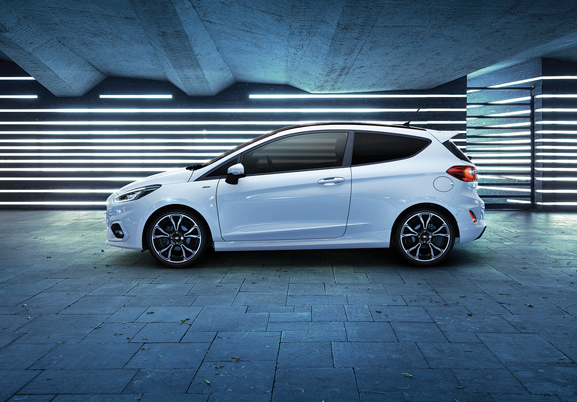 Any car model cannot notch-up eight successful generations by being starved of investment. Despite FoMoCo being renowned for keeping a close eye on production costs, it has updated the Fiesta regularly to maintain desirability. Compared with its 1976 original, the 2021 ‘Mark VIII’ is bigger, safer, faster, more economical and better equipped but – even when adjusted for inflation – more expensive.

Despite the current version being more complex than its ancestors, the Fiesta has never been a technical innovator. Instead, Ford has relied on regular styling and specification updates to keep the model fresh, even if the mechanical hardware remains relatively unremarkable. This is not necessarily a bad thing; tried-and-tested engines and transmissions help to suppress repair costs, plus technicians also appreciate a degree of familiarity.

Fiesta for today
The strategy shines through to the current cars, which share their transverse-mounted engines and transmissions with other models in the Ford range. Clearly the old Kent-based OHV and later CVH petrol engines of the past can deliver neither the environmental performance required by legislators, nor the performance and economy demanded by drivers. Time has moved on.

When fitted to the first of the Mark VIII Fiestas in 2017, the Fox engine family was five years-old already but Ford upgraded it with a cylinder deactivation system, co-developed with Schaeffler. It uses engine oil pressure to activate a valve rocker that interrupts the connection between the camshaft and cylinder No 1’s valves at speeds up to 4,500rpm. To deal with the new NVH frequencies, when the engine operates in two-cylinder mode, the dual mass flywheel specifications were revised and a vibration-damping clutch disc was fitted, along with a different camshaft chain and reworked valve rockers. A video of this technology in action, demonstrated on the Fiesta ST’s all-aluminium ‘Dragon’ three-cylinder 1.5-litre engine, can be viewed below:

Fitted to the least powerful Fiestas, the 1.1-litre Ti-VCT boast a 1084cc capacity that produces either 70, or 85PS, with variable valve timing operating on both overhead camshafts. Rather than featuring direct-injection (GDI) technology, both versions are members of the Fox engine family and are port-injected and normally-aspirated.

The more powerful 1.0-litre ‘Ecoboost’ version (998cc) comes in 100PS, 125PS and 140PS outputs, all of which are direct-injected and turbocharged. Like the smaller non-boosted offering, it features BIO timing gear, a split-cooling system that employs two thermostats, and a cast-iron crankshaft that is supported by four main bearings.

Last year, the Fiesta inherited a low-voltage mild-hybrid system from the new Ford Puma crossover, with a choice of 125PS, or 155PS. Available with the 1.0-litre Ecoboost Fox engine, the system comprises a conventional combined belt-driven integrated starter-alternator (BISG). Unlike the 12v alternative, fitted to the Fiat 500/Panda mild hybrids, which AT investigated last January, Ford employs the more orthodox 48v but the Fiesta mHEV is more expensive than the Fiats. Yet, the higher voltage delivers superior results. Compared to the 125PS non-hybrid Fox, the BISG version is 5% more fuel-efficient and raises the engine’s torque output by up to 50% at low RPMs. This torque increase has given Ford the flexibility to reduce the engine compression ratio (to increase efficiency) and install a larger turbocharger for more top-end power. The system also complements the start-stop system, allowing it to be activated at speeds below 15mph, including while the vehicle in gear and the clutch pedal is depressed.

New DCT gearbox to replace Powershift
It is no secret that the Powershift dual-clutch automated manual transmission, a joint-venture between Getrag and Ford, gave the company and its owners more than a few headaches. Since then, Getrag has been renamed Magna PT and is supplying its 7DCT300 DCT for both the Puma and Fiesta hybrids. As the name denotes, the seven-speed gearbox has a 300Nm torque limit but the advanced unit saw service first in the 2015 Renault Espace, a model not imported to the UK, as well as BMW MINIs since 2017.

An interesting change over more recent Powershift DCTs is the reversion to wet clutches, lubricated by the transmission oil. Clearly, a crankshaft-powered oil pump is unsuitable for a mild-hybrid, which needs to cut the engine while the car is still moving. Therefore, the 7DCT300 possesses an electrically-powered pump, driven not by the 48v circuit but the 12v electrics. The gearbox utilises lubricant to Ford-specification WSS-M2C218-A1, which is freely available and has a change interval of 6 years, or 56,000 miles. Thankfully, the procedure appears relatively straightforward, with fill and level plugs provided on the transmission case.

An interesting aside is that the Magna PT HybridDrive 7HDT300 integrates a high-voltage electric motor within a transmission case of very similar (if not identical) dimensions to that of the 7DCT300. This could give the Fiesta a bolt-on hybrid/plug-in hybrid capability. While nobody at Ford would confirm such a model is planned, technically (and in theory), it is viable.

Summary: Ford continues its winning formula by keeping the Fiesta contemporary but not too radical. The three-cylinder petrol engines (and four-cylinder diesels) are produced in huge numbers and the aftermarket is familiar with them. The new mHEV also offers well-proven hybrid technology. We hope that Ford and Magna PT have learned from the errors made with the earlier Powershift but, as other makers use the 7DCT300, major issues should have been ironed-out. Fiesta prices range between £16,640 to £27,075, with the mHEV DCT costing £21,565, when introduced on March 25th, 2021.