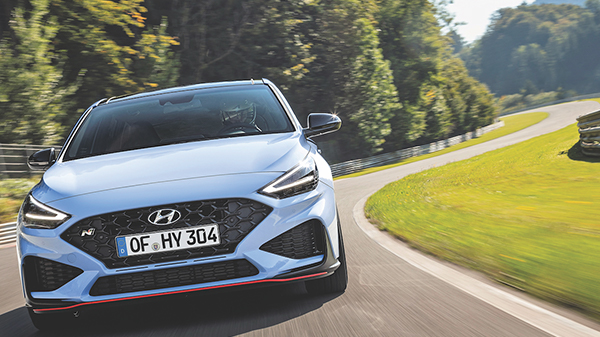 With electrification being the current trend in new cars, Iain Robertson rejoices that conventional but well-executed technology is still relevant, especially to satisfy the enthusiast on a budget.

The i30N is Hyundai’s Focus RS, with much of its development programme arising from Hyundai’s world motorsport activities, with the i20 in World Rally Championship (WRC) and the i30 models in touring car racing. Adding an ‘N’ suffix to its zestiest models is not just because Hyundai operates an R&D centre at Germany’s Nürburgring Racing Circuit but that the birthplace of ALL Hyundai models is Namyang, South Korea.

The model development was carried out entirely in-house by Hyundai Motor Group’s HPV (High Performance Vehicle) team. Under the control of Albert Biermann and working with Hyundai Motorsports (HMSG), the i30N was created after the development of the WRC cars. In 2016 and 2017, i30N prototypes were entered into the Nürburgring 24 hours Race to test its production powertrain under endurance race conditions. There were no breakdowns.

Apart from the use of an AGM battery for the stop:start facility, the i30N relies on no additional electrification and is an entirely mechanically conventional petrol-turbo performance car. Its transversely mounted, direct-injection, 4-cylinders, 1,998cc engine develops a competitive 277bhp @ 5,200rpm, with 289lbs ft of torque available between 1,950 and 4,600rpm. Driving the front wheels, it scorches from 0-60mph in 5.6s to a maximum speed of 155mph.

Unlike other super-hatches, Hyundai does not rely on specialist suppliers, such as Brembo (for brakes), KYB (for suspension), or Recaro (for sports seats), preferring instead to develop and manufacture those parts in-house. While some carmakers like to boast of their often spurious Nürburgring lap records, Hyundai uses the facility more sparingly, as a means to hone the N performance brand.

The reason for using a multitude of road routes in the Eifel Mountains, not just the ‘ring’, is to prioritise fun driving over outright performance. Most of the i30N’s hardware is inherited from its confusingly-named predecessor, including the relatively elderly turbocharged GDI Theta II engine, although at least the i30N installation benefits from an all-new cylinder head.

The strengthened 6-speed manual is conventional but works with the engine management system to provide rev-matching on downshifts, flat throttle upshifts and launch control.

In new i30N specification, the 18.0-inch diameter cast alloy road wheels are swapped for 19.0-inch forged alternatives that reduce overall unsprung weight by 14.4kgs but are also significantly stronger. They are clad in Pirelli P-Zero asymmetric tyres, developed especially for the i30N, that carry an ‘HN’ designation. The in-house developed N Light leather and Alcantara sports front seat option is of a combined seatback and head-restraint structure that is more sportingly bolstered and weigh 2.2kgs less than the standard i30N seats.

The single-piston front discs are of 360mm diameter (an increase of 15mm over the first gen) for increased braking efficiency. Bespoke pads, capable of providing enhanced braking performance, are also produced in-house. The suspension is manufactured by a company called Mando, part of the Hyundai Group. Precise technical information on bounce and rebound rates has not been released at the time of writing, as the car is yet to be launched. The i30N tips the scales at 1,429kgs and additional platform strengthening enhances structural rigidity.

Despite the specialised nature of the i30N, it is based on the standard i30 model and, to comply with EU standards, a full complement of ADAS is included in the packed specification. As Hyundai has also developed a complementary ‘N-Line’ (like Ford’s ST-Line, or Audi’s S-Line) for marketing sportier options, the ‘N’ designation is reserved (like ‘RS’) for its most overtly sporting models.

Summary:
Both outwardly and mechanically, Hyundai has created
a surprisingly conventional ‘hot hatch’ in the i30N that works exquisitely. Hyundai’s stoical manufacturing independence may not buy-in external supplier expertise but its international team of R&D engineers, amassed organically over the past five years, possesses a wealth of industry-wide knowledge that allows it to satisfy its own developing requirements. The i30N is available to order now for early-2021 delivery and is expected to retail from £30,500.