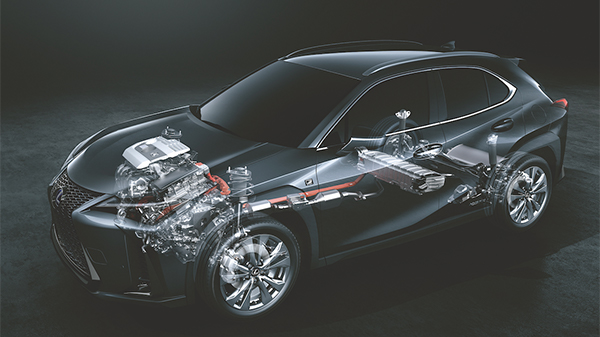 Last issue, we dug into the engineering simplicity of the brand- new Suzuki Jimny. As a complete antithesis to it, the luxury/ technological arm of Toyota, Lexus, is a premium quality brand to which ‘continuous advancement’ are its watchwords and Iain Robertson makes a six-point review of its latest but less ‘scary’ new 4×4 model, due to hit UK roads from March 2019. 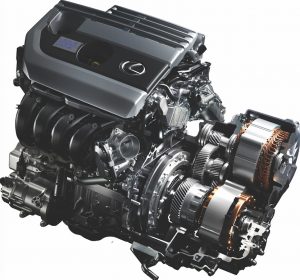 The compact Motor/Generators (MG1 and MG2) are located at the rear of the engine within the transaxle.

The company’s all-new UX 250h crossover is the result of a five-year development programme that involved hundreds of its engineers and technicians in the creation of one of the most advanced vehicles that even Lexus has ever built. This includes delivering a new, fourth generation, hybrid powertrain, each element of which benefits from a series of innovations and improvements in both design and overall efficiency. While you may not see a UX for several years in your workshops, Toyota/ Lexus told Autotechnician that it has improved accessibility to all normal service items, as a measure to cut maintenance costs and make it easier for non-franchise repairers.

Running on 0W16 lubricant, the 2.0-litre in-line four-cylinder Atkinson-cycle engine is now one of the most efficient that Lexus has ever produced, achieving 41% thermal efficiency (put into perspective, the average petrol engine is around 22%, diesel around 30%, although the latest Toyota Prius hybrid unit is very close at 40%). Its advanced features include enlarged intake valve seats, cut by laser for greater precision, and a D4-S fuel injection system, which combines both direct and secondary port injectors per cylinder; the object being to speed-up airflow and create the most-efficient burn. A high (for an Atkinson-cycle non-turbo petrol engine) 14:1 compression ratio supports the overall efficiency target, while a simpler exhaust heat recirculation system provides speedier warm-up of the engine (120s at 10 degreesC) that also carries reduced emissions benefits. The unit is equipped with electric intelligent variable valve-timing (VVT-iE), retaining hydraulic operation of the exhaust valves and a faster-reacting electric system on the inlet side, which Lexus calculates will enhance driveability and reduce emissions, in all traffic conditions, loads and locations.

A new front hybrid transaxle connects the engine to two electric Motor/Generators (MG1 for engine starting and battery charging functions, with MG2 driving the front wheels). To make it even more compact and to improve driving performance, a multi-axial layout includes an additional electric motor on the rear transaxle. The gearbox’s length has been reduced by about 45mm, which gives the steering gear more space to create a tighter turning circle (10.4m kerb-to-kerb). With overall transmission losses reduced by a quarter, the more efficient Motor/Generators yield better performance overall.

The new Power Control Unit, PCU, is 20% more powerful but 10% lighter than previous versions fitted to both Lexus ES saloon and other Toyota models. Its size and weight were reduced by developing a new, compact circuit board, DC-DC converter and power stack structure. Combined, these items have reduced power losses over Toyota’s 1.8-litre hybrid unit by around 20% and improved the fuel economy, which is not merely essential for the changing governmental pressures placed on new cars but also for end users’ satisfaction, many of which will be from the heavily-taxed company car sector.

The PCU is mounted directly above the front hybrid transaxle, as a result of its compact dimensions, having been moved from inside the cabin. An additional benefit is the lower, more aerodynamically efficient bonnet-line that offers better protection for pedestrians in the event of a collision. 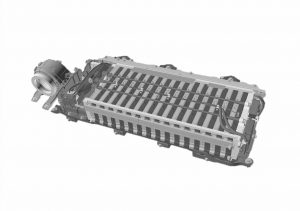 The UX 250h’s revised and more compact nickel-metal hydride (NiMH) battery helps to increase fuel efficiency and performance, with the UX 250h being prioritised in EV mode. Toyota perseveres with NiMH, rather than following the industry norm with Lithium-ion battery technology, for two sound reasons: a) Lithium is a natural resource that is also proving more difficult to mine and b) NiMH is less volatile. Yet, the company uses Li-ion types now in other models. Working with its battery partner, Panasonic, the UX’s battery features
a more compact cooling system and also new but (at the moment) secret electrode material. It comprises 180 x 1.2V cells, giving a total voltage of 216V and an output of 24kW. It is located beneath the UX’s rear seat, not spread across the whole floor pan, which serves to minimise intrusion in the boot and contributes to the car’s improved front/rear weight distribution and lower centre of gravity.

The new E-Four all-wheel drive system uses a dedicated (third) electric Motor/Generator integrated with the rear differential. Compared to previous Lexus AWD systems, the rear hybrid transaxle has been reduced in size and weight significantly, which improves both luggage space and the car’s handling agility and stability. As is typical, it uses sensors to monitor wheel speed, G-forces, yaw rate and steering angle. The front- to-rear torque split can vary from all-front, to a more rearward 20:80, which aids dynamic balance significantly. Steering feel is both more precise and reactive. E-four also aids stable driving on uphill slopes, or snow-covered roads, while fuel consumption is claimed to be around 12% improved over former two-motor developments.

The engineering team at Lexus sought to reduce weight, with the intention of improving the UX 250h’s efficiency and performance. The new engine is one of the lightest in its class, weighing a mere 112kg (a Prius engine tips the scales at around 117kg). A further 27kg was saved by using aluminium, in place of steel, for the vehicle’s doors, wings and bonnet, with a lighter composite material used to construct the tailgate. The aluminium internal tailgate frame, with outer and inner panels made of Super Olefin Polymer is another Lexus first. These weight-saving measures result in the UX having the lowest centre of gravity of any vehicle in its class.