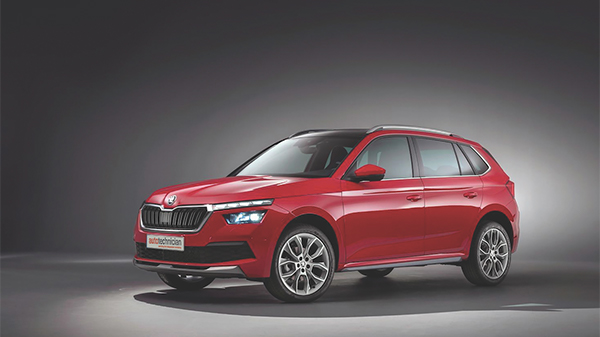 Considering its parent company’s reputation being dented severely by ‘Dieselgate’, and its subsequent statements about ditching internal combustion, it is surprising that two new petrol and diesel Skoda models have been launched that lack EV, or even hybrid options. Yet, Iain Robertson reveals that the VW Group’s flexible AOB modular platform (part of the MQB family) that underpins its new hatchback Scala and SUV Kamiq mean that things have not regressed entirely. 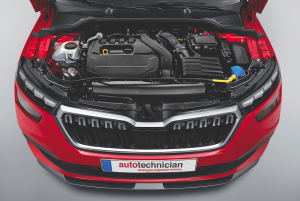 All of the Skoda Kamiq and Scala’s engines are conventional direct- injection units with turbochargers and DPF/GPFs. While they come with brake energy recovery as well as Stop/Start technology, no hybrid is available for now.

With VW Group now presenting well in excess of 200 variants of models across its four main brands, Skoda, Seat, Audi and Volkswagen, platform sharing is both an economic and a flexibility requirement. Cutting manufacturing costs, by up to 40%, while reducing both model development and manufacturing times, are key priorities. Scala will replace the Rapid model, while the Kamiq is a new car entirely in the SUV class, despite the significant sharing of both models’ underpinnings. It is worth noting that, in previous generations, the descriptive term, ‘platform’ included the metal floorpan pressing.

For the all-new Scala hatchback (the first in-house Skoda rival to the VW Golf ) and the Kamiq, the AOB compact car designated platform is common. The only fixed dimension for the engineers is the area between front bulkhead and the midline of the engine location; all other measurements, front to back and width, are flexible. At the same time, Skoda has been taking a more rational view of its part in the much-publicised VW ‘dieselgate’ debacle. We shall concentrate on the Kamiq.

Each of the Kamiq’s engines are direct-injection units boosted by turbochargers. They come with brake energy recovery, as well as Stop/Start technology and comply with the latest Euro 6d TEMP emissions standard. The entry-level, three-cylinder 1.0-litre unit delivers 92bhp and 129lbs ft torque (145g/km CO2) and drives through a 5-speed manual gearbox. An 112bhp/147lbs ft alternative (142g/km CO2) comes with a 6-speed gearbox as standard and a 7-speed DSG (twin-clutch automated-manual) as an option. 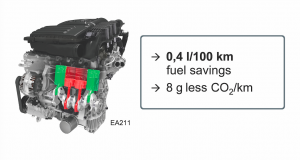 The top petrol engine is the familiar four-cylinder 1.5TSi with a power output of 147bhp/184lbs ft (6-speed manual/7-speed DSG) and Active Cylinder Technology (ACT) that shuts down two cylinders automatically (153g/km CO2), when the load is low, to save fuel and reduce exhaust emissions. All three units are equipped with petrol particulate filters (GPF). A new 1.0 G-TEC engine (87bhp; 66g/km CO2) is designed to operate on CNG (Compressed Natural Gas) that promises even lower emissions and enhanced fuel economy. The CNG option is unlikely to be made available to the UK market, which does not have a viable refuelling infrastructure.

With a constant drip-drip diet of EVs and hybrids being heralded as ‘the future’, it may come as a surprise to appreciate that Skoda has hybrid technology in its sights but no visible signs are evident in the Kamiq. While VW is the declared ‘bad boy’ in this arena, the Skoda division appears not to be swayed by the negative publicity, instead relying on more traditional means of cutting pollution and increasing fuel economy.

While VW Group has stated that it will cease internal combustion engine manufacturing within seven years, Skoda may appear to be cocking a snook at the plans. A petrol-hybrid model is rumoured strongly within the next three years but a change to EV may be someway distant, even though the platform is ‘EV-ready’.

The ‘Vision X’ concept car that was also produced on the AOB platform and preceded the Kamiq, featured space for CNG tanks, which can be adapted readily to accept a Lithium-ion battery pack and either partial electrification, for the forthcoming plug-in hybrid model, or full electrification for a potential EV variant. Skoda is being very tight-lipped about these future models, although a source told autotechnican that they are coming. 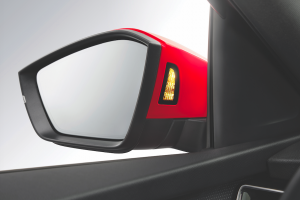 Unsurprisingly, the new Skodas boast a number of ADAS systems. The optional Side Assist can detect vehicles that are up to 70m away and wanting to overtake, or that appear in the car’s blind spots.

Should Skoda pursue a 4WD future, the Kamiq would be its first without a propshaft. Lower weight would mean less fuel consumption. Drive to the rear axle would engage an electric motor that starts only when required. The combustion engine, equipped with another electric motor, would feature a belt- driven starter-generator, while the rear axle-mounted electric motor would be powered by a 48V Lithium-ion battery system, recharged while driving, using kinetic energy recovery, on both over-run and braking. The battery pack would also provide a 51lbs ft torque boost at both start-up and for short bursts of speed.

Skoda’s oft-mentioned and well-intentioned stance on value- for-money means that these totally mechanically-conventional cars are unlikely to throw-up any servicing anomalies, as they enter aftermarket workshops. Thanks to enhanced connectivity, updating the sat-nav maps now takes place ‘live’ and does not necessitate a dealer visit. Using a Skoda-based app, traffic conditions can be monitored more efficiently in a Kamiq, which means that more economical progress can be made, which also helps to reduce the car’s environmental impact.

Summary: Renowned for a practical approach to both new technology (which tends to be fitted on an ‘as required’ basis) and the company’s historical place in the market, Skoda demonstrates with the new Kamiq (and its Scala hatchback sister model) that it is not looking to shake-up the market. While both cars employ a flexible and up-to-date platform strategy, they are mechanically conservative. Intentionally tech-friendly, however, the brand’s responsibility to individual territories will determine its next move in the UK, a factor that may be reflected in later launches of EV, or hybrid, alternatives – but not for now.