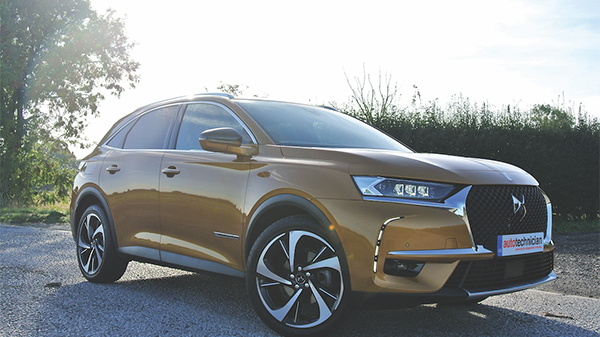 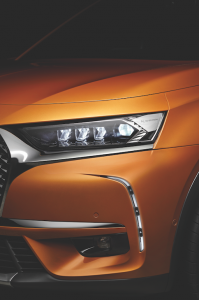 Virtually all carmakers for the past decade have been creating LED headlamp signatures for their various cars, to differentiate between models in a range and, with fancier arrays, to also highlight more expensive variants. While the Vauxhall division of the PSA Group equips some models with Intellilux matrix- style headlighting (next issue), the luxury arm, DS, uses an Active LED system. Fitted as standard to higher-spec DS7 models (an option on lower grades), at start-up, or switch-on, the three LED lamps in each headlamp array illuminate in purple and then swivel through 180-degrees and ‘dance’ prior to settling into their active modes. It is a remarkable display, reminiscent of the swivelling lamps of classic Citroën models but also proves to be highly efficient. A fixed LED projector unit sits alongside in each unit. At night, with the lighting selector on ‘automatic’, the beam adapts in width and range to the road conditions and the vehicle’s speed. Six lighting modes are available: Parking (no glare), Town Beam (picks up on the edges of the light pattern), Country Beam (detects lighting ahead but broadens the beam width), Motorway Beam (faster driving expands light range), Adverse Beam (takes weather conditions into account and reduces lamp intensity) and High Beam (also dips automatically). While the spread of illumination is greater than with Xenon lamps, safety is also enhanced with the rear LED lights that activate in an instant and benefit from a lifespan as long as that of the car. 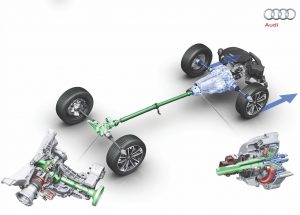 For more than three decades, the quattro 4×4 system has been synonymous with Audi. While mild upgrades have taken place on a tried and trusted system, Audi has repurposed it for longitudinal engine layouts and branded it ‘Quattro-ultra’. The developments involve an array of sensors, linked to an ECU that controls the predictive use of 4×4, although its default position will be traction-controlled front-wheel drive, to improve fuel economy. As expected, Quattro-Ultra’s electronics are networked with other systems in the car. In proactive mode, the car will detect wheel slip, angles and both lateral and longitudinal acceleration, within defined parameters, before enabling four-wheel drive. In predictive mode, the sensors take driving style, status of the ESC (stability control), dynamic Drive Select (chassis adjustability) mode and towing detection into account, while the reactive setting will detect if the car’s tyres move suddenly from dry tarmac to an ice-covered road. For front-wheel drive, two clutches are used in the front transaxle, with a ‘wet’ multi-plate clutch (oil bath) at the gearbox take-off that disconnects the propshaft. An integrated decoupler in the rear-axle differential also opens, shutting down the primary cause of drag losses in the rear section of the drivetrain. The all wheel drive, wet multi- plate clutch is located at the rear of the transmission, where it uses an electric motor to drive a spindle that operates it. The quattro drivetrain is nearly four kilograms (8.8 lb) lighter than the previous system, despite the new technical components. 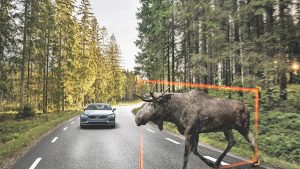 When talking with Scandinavian residents about the most problematic aspects of driving in their splendid countries, they will tell you that elk avoidance is a priority. Although you might not think  it, between horses, stray cattle and deer, our on-road hazards can be almost as serious. It will come as little surprise that Volvo Cars, which operates an insurance industry leading crash test and accident recovery programme in Sweden, has introduced a Large Animal Detection system in its vehicles’ forward-facing, City Safety, ADAS crash mitigation program. Even a low-speed clash with wildlife can cause substantial damage on a vehicle, let alone the animal and the vehicle’s occupants. Using a monocular camera, in conjunction with milliwave radar, located in the Volvo’s radiator grille, a graphic representation of the animal is displayed in the ‘head-up’ display, the main instrument panel and also on the vertical display screen in the centre console. While the responsibility for travelling at a sensible speed and for taking avoidance action is in the driver’s hands, the City Safe program will also operate the relevant Volvo model’s autonomous braking system and even the ‘swerve’ control related to steering deflection, all without the car losing control. It is not a fail-safe system but anything that provides any degree of assistance to even the most engaged of drivers, to avoid a major incident, must be considered worthwhile. 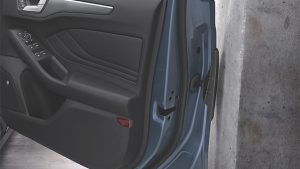 We are a ‘car proud’ nation. We lavish millions of Pounds annually on our vehicles, with new polishes, cleaning cloths and detailing gear topping the sales charts at accessory shops around the UK. A few years ago, clearly before car owners thought about the potential damage arising from screw-fixing a rubber deflector (usually complete with reflective disc) to their vehicles’ doors, the range of slide-on, slip-over and bolt-on options was surprisingly comprehensive for something so inexpensive. Yet, at resale time, if the owner did not spend a final Sunday afternoon with the touch-up paint, those annoying little dings and paint-chips that occurred invariably on the edges of the driver’s and front passenger doors could cost several hundred pounds in lost value. While the latest Ford Focus and Fiesta models now feature the Door Edge Protector either as standard on higher specification models, or as part of an optional kit, it was available on the previous generation Focus. It is an ingenious ‘pop out’ device produced from dark grey, compliant plastic. With the door closed, it is invisible. As the door is opened, it springs into place and protects the most scratch vulnerable section of door edge. With parking spaces becoming more cramped, it is a surprise that Door Edge Protectors are not standardised across other brands. As a technological innovation, it may not seem like much but it possesses tremendous value to the car proud individual.