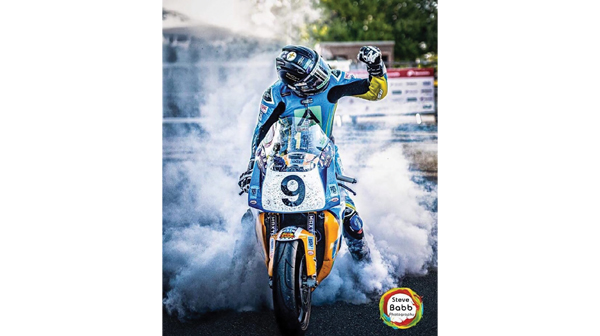 Australian Davo Johnson won on the team’s 1992 ZXR Kawasaki 750 for his and the Scottish team’s maiden victory.

Johnson looked like he was going to have to settle for second place in the four-lap Superbike race, only for long-time leader Michael Dunlop to retire at Hillberry on the final circuit with only a couple of miles left to go.

This left the door open for Johnson to secure a 41.276-second win over the fast-finishing Derek Sheils.

He said: “To make the bikes quick they are really hard to ride. I’m really happy because I put everything into it and a huge thanks to Alasdair Cowan and the team.”

Alasdair Cowan, a train driver who trained as a motorcycle mechanic 25 years ago, has praised NGK Spark Plugs for supporting the team. He said: “NGK and their Scottish Sales Representative John Catterson have been incredibly supportive, and I am really grateful for all the help they have given us since we first started.”