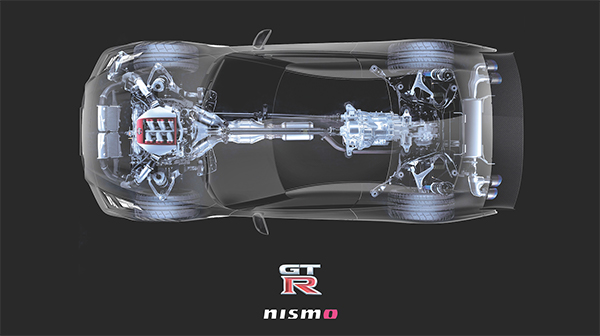 Despite an indomitable reputation, the GTR35’s tech-laden big shoes were still insufficient to accommodate the GTR34’s greater visceral feat (sic.), writes Iain Robertson, but an extensive hone and re hone process now makes it feasible, especially in NISMO 600 guise.

In NISMO 600 form, its 3,799cc engine has been boosted to 595bhp (from 565bhp standard), with 480lbs ft of torque. Its predictive, automated-manual gearshift times have been reduced by 0.15s in R-Mode. The Bilstein adaptive damping suspension has been refined for sharper bump and rebound control but a smoother ride quality overall, while the steering is not only more linear than before but is now more surgically precise. The braking system has been improved for greater feel and keener pedal responses. The lightweight titanium exhaust system has been modified from turbochargers to tailpipes. New alloy wheels and the return of Bayside Blue to the colour palette, using an intriguing double-heat treatment, plus revitalised trim detailing features in the cabin.

Kaizen is at the technological heart of the GTR, evinced by NISMO’s constant need to evolve and fine tune. Each member projects curiosity and a‘what if’ mentality, which ensures that small improvements combine to make a high-quality discernible difference. 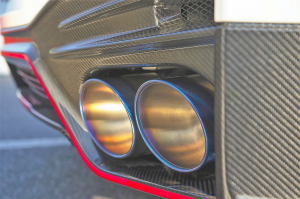 Largely hand-built, the V6 engine is race engineered. The twin turbochargers have been revised to the same specification used by the GTR35 GT3 racing car. In other words, the number of turbo vanes has reduced from 12 to 11, they are 0.3mm thinner, which makes them 14.5% lighter but they also spool-up almost 25% faster for better low-rev pull and less lag. Although Nissan states that the power has only been increased by 30bhp over standard, the revised turbochargers are mounted on a new manifold with optimised turbo flange attachment points that allow for easier engine access, without touching the exhaust manifold. Thanks to new abradable seals that are wear and tear resistant, tighter clearances are provided that result in a 5% improvement in thermal efficiency. 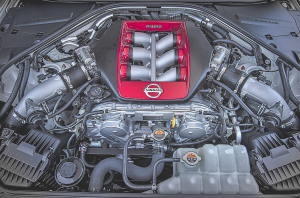 Driving through an optimised 6-speed, twin-clutch, automated-manual gearbox, for statistics fans, the GTR has a top speed of 196mph, is capable of scorching from 0-60mph in 2.3s, emitting CO2 at a rate of 325g/km, while returning 19.7mpg on the official combined test cycle (WLTP figures). The algorithm for the adaptive shift transmission has been altered to provide more logical and intelligent shift patterns and marginally speedier shift times than before (either using the gearstick sequentially, or the steering-wheel mounted paddles). The combination of all the refinements have improved the GTR’s verve to new pinnacle levels. 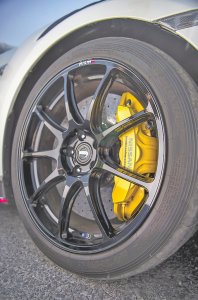 It is pure power that motivates the hefty 1,725kgs 2+2 coupe, despite carbon-fibre wings, roof, spoilers and bonnet/boot panels. The front wings also contain aerodynamic vents (just like the current Porsche 911 GT3) that allow heat build-up from the all-ceramic braking system to be extracted. Ceramic brakes dissipate heat more efficiently than steel equivalents and provide around 30% greater stopping potency. At 410mm diameter (390mm rear), the front rotors are the largest ever fitted to any road car and the Brembo yellow callipers resist heat discoloration.

The 20x10J (front) and 20×10.5J (rear) RAYS forged alloy wheels are 100gms lighter than before and are designed with an extra series of ribs within the wheel wells that grip the nitrogen-filled run-flat tyres, to resist any rim slippage. Even the bespoke Dunlop Sports Max GT600 tyres (245/40×20 – front; 285/35×20 – rear) feature fewer grooves to increase the contact patch by 11%. A fresh rubber compound and more rounded shoulders provide enhanced lateral grip. 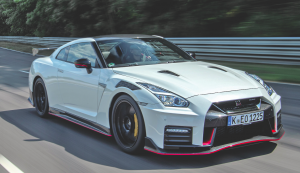 NISMO’s engineering team was determined to improve the GTR35’s overall handling envelope, to that of the former GTR34. Made by Bilstein, with three selectable settings, where the previous damper set-up was unforgivingly harsh on its track position, it is now just more resilient overall. The spring rates have been softened slightly; body roll is controlled. The enhancements made to the gearing of the electronic variable ratio steering rack have improved input reaction times and enhanced yaw-rate response but removed the nervous edge at higher speeds for greater stability. 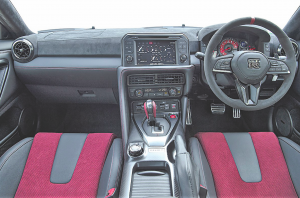 Lightweight, stronger carbon-fibre Recaro bucket seats are marginally more accommodating, yet supportive for northern European drivers. The ATTESA ET-S (Advanced Total Traction Engineering System for All terrain, with Electronic Torque-Split) four-wheel drive system is unique to the GTR and provides a variable torque split between front and rear axles, monitoring the car’s movements through a 16-bit computer, up to ten times per second. It detects wheel slip and, using a three-axis G-sensor that works in conjunction with the car’s ABS system, it apportions power to each wheel, with a slight bias towards oversteer, which makes the GTR even more engaging to drive at high speed, thus enhancing driver appeal. It is not demanding and actually helps the driver to indulge in the prodigious capabilities of the car, even ensuring that driver reactions are intuitive to the car’s handling intelligence.

Nissan knows that it has produced a car that possesses near unbeatable chassis dynamics. While the aerodynamics were highly advanced more than a decade ago (0.26Cd), Nissan has worked to ‘old skool’ ethics of ‘if-it-ain’t-broke-don’t-fix-it’. Yet, the raft of fine-tuning almost warrants a GTR36 designation, so dramatic and re-honed are the effects of the changes introduced on the 2020 model. The GTR35 was a techno-fest of alarming engineering; the latest model redresses the balance and, by making better use of the technology, a better car results. It is worth noting that early GTR35 models are now available at less than a tenth of their original invoice values.

Summary: It needs to be stated that the Skyline GTR35 is still a 15-years-old design at heart but, unlike a number of its competitors, it does not feature electrification at any level. Nissan suggests that it has those consumer offerings further down its price list and that the GTR35 is a singularly focused, high-quality and race-bred machine (especially in NISMO 600 guise), for which aspects of hybrid technology will be included in future model developments.