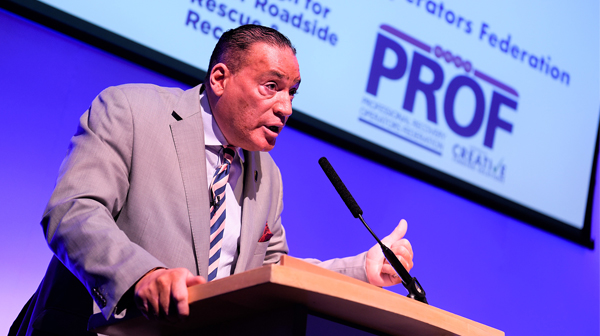 While the International Convention Centre might not have been the most accessible venue for some of its invited guests, the NTDA’s return to Birmingham was important symbolically, because the city not only hosted the association’s very first meeting but also its 2015 re-launch.

Its charismatic Chief Executive, Stefan Hay, kick-started proceedings by responding to criticism of its 2017 Manifesto For Change, related to the NTDA’s emphatic stance on the banning of part worn tyres. He remains unrepentant for the stance, addressing the critics who state that NTDA members have a vested interest to sell new tyres.

“Damn right,” he stated to the audience, “Our members don’t sell part worn tyres… they want to sell more new, safe, legal tyres. I’m making no apology for that!”

Citing the lack of enforcement of the current regulations and that last year’s investigation by both TyreSafe and Trading Standards revealed 99% of the part worn tyre retailers investigated were not complying with the regulations, Mr Hay questioned that if all non-compliant tyres were banned, what would be left?

After conducting further surveys from its membership, the NTDA has taken its philosophy a step further and launched the campaign, “NTDA Members Don’t Sell Part Worn Tyres”. While supported by 100% of its fellows, the new promotion is aimed ultimately at consumers, to educate them of the risks that part worn tyres present and why knowledgeable tyre distributors will not prejudice their safety, by selling covers that are likely to be unsafe. The NTDA has invested in a series of posters, banners and advertisements that are available for its members to order.

The focus on part worn tyres was not at the expense of other pressing issues. Continental’s Steve Howatt detailed the challenges of making the tyre industry attractive to new recruits of all ages, training them accordingly and retaining them. He advises garage owners specifically to look into establishing development plans for their employees, not only to help them make fewer errors but to also to make them feel more appreciated, by providing a defined career path. Time and cost-effective methods were detailed, including using social media as an online classroom to foster teamwork.

Echoing the comments made by the new NTDA Chairman, Martin O’Brien, about raising awareness of the dangers that roadside tyre operators face under the REACT steering group, Richard Goddard, founding Chairman of the Professional Recovery Operators’ Federation, infused the audience with his passion about the risks that recovery services face on smart motorways especially. During August, September and October 2017, one recovery operator was killed per month, a situation not helped by the authorities not closing the relevant lane and displaying a red cross on the gantry, when an independent recovery operator is working. Frustrated by the lack of official consideration to the safety of his members, Mr Goddard described how establishing an All-Party Parliamentary Group was critical to lobby both the government and Highways England successfully about the safety of roadside technicians. He calls for the right for recovery operators to use red lights, warning of their presence, instead of the amber ones used currently.

“After all,” he concludes, “The Government must take note of what we endure to keep the roads moving.” The lobbying tactic has worked and an official review is under way.

After Chris Smith from Michelin Tyre PLC highlighted the impressive forces (of around 10 tonnes), posed by a runaway truck tyre and how TPMS can provide an answer, Ryan Naughton from CAM (Computer Aided Marketing) detailed how computer software continues to transform the tyre trade. From capturing data and using it to benefit both your customers’ safety and your business, to mobile solutions for direct data access and stock management in the workshop, there was plenty to fire the imagination for garages seeking to evolve their businesses. This was especially relevant, because Quentin Le Hetet from GiPA UK focussed on tech-savvy ‘Millennials’ and how they will be not only your customers but also your staff in the near future, if not already. As usual with his presentations, the charismatic Frenchman proved that a stat-fest does not mean a snooze-fest. In 2013, for example 10% of Millennials bought car parts online, in 2018, it more than doubled to 21%. Combined with their prolific smartphones use, willingness to research, a reliance on positive reviews and high expectations of immediate responses, the aftermarket was urged to focus on the effectiveness and user friendliness of their online outlets.

The worrying issue of being guilty until proven innocent was considered by Craig Allen of ABAX Ltd, who informed delegates that the HMRC is being more proactive in chasing Benefit In Kind tax for employees using work vans for personal use. The use of telematics, therefore, is a key way that you can log journeys and ensure that any investigation, which can stretch back six years of trading, does not cripple your business both in terms of time taken and any back-taxes due, which can be up to £34,000 per vehicle.

The final afternoon session started with a green theme, with Simon Hudson from Astutus Research detailing the very positive work that has been going on in the EU (and the UK) that has seen average used tyre recycling rates increase from around 60% to over 90% in 18 years. The importance of standards (the theme of our next magazine, incidentally) were also emphasised by Richard Armstrong of Philips/Lumileds, who moved away from tyres, to emphasise the issues associated with counterfeit products in the aftermarket. We shall expand on this issue in a future issue. Dave Walker of Remit Training rounded-off the industry topics, with a call to support the Specialist Tyre Operative Apprenticeship Scheme, which has been the result of 15 months of hard work. “Use it, or lose it” was his message to the tyre industry.

Despite the many serious industry topics raised, Reverend Richard Coles’ sprinkling of celebrity stardust provided immensely humorous, yet down-to-earth tales of his rise from being a ‘gay runaway’ from Northampton, partnering with Jimmy Somerville in The Smoke to establish The Communards, through to finding religion and being the only applicant to tick the box marked ‘have you ever used recreational drugs?’ on his Ordination Application form. It was a fitting end to round-off a very thought-provoking conference, proving not only the NTDA’s awareness of the challenges facing the industry but also the willingness to tackle them head-on.