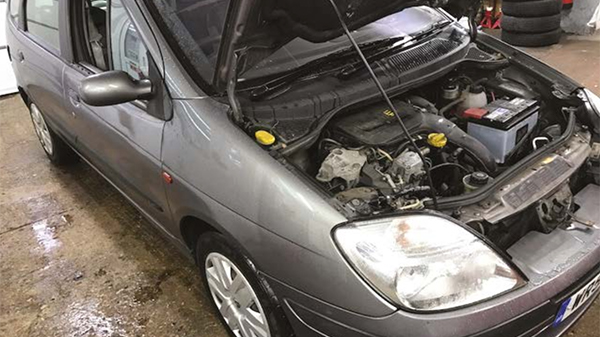 This case study begins with a fairly standard occurrence here at Cleevely Motors, with a customer walking into the workshop holding out the key for his abandoned vehicle, a 2001 Renault Scenic DCi.

“It cut-out on a junction, eventually restarted, then the engine cut-out again within a minute,” he told me, explaining that when left for a few minutes the engine would restart, but it wasn’t reliable. Thinking smugly that the problem would be the ‘standard’ Renault crankshaft sensor failure, I sent a couple of colleagues to collect it after a few hours, knowing they would be able to drive it the couple of miles back. Once it was collected and driven-back, I got the apprentice to check the fault codes, expecting him to see ‘engine speed sensor’ as the only code, but I was wrong. The fault code read revealed that there weren’t any codes present.
I had to try and get the fault to occur to be able to carry-out any testing, which didn’t take long… a minute or two later, the engine had cut-out. I wanted to carry-out some serial data checks (engine speed signal, fuel pressure, ignition voltage), but no communication was available with the ECU. I also noticed the engine management and glow plug lights weren’t illuminating. With the ignition on for a minute, to check battery voltage, the EML illuminated again and communication was re- established. There were still no codes present. When I checked the data, it was without fault and the engine started and ran fine, without hesitation. It ran without failure for as long as I tried to test it!
RELAY BENCH TEST
Thinking about the evidence I had already collected, I came to the conclusion that I was tracing a power supply fault. After obtaining a wiring diagram, I removed and tested the two ignition power control relays that fed the engine ECU and fuel pump. Bench testing the relays I found that, very intermittently, one of the relays failed to connect when powered-up…success?
After replacing both relays I tested the vehicle again, only for it to fail before it even warmed-up and appeared worse than before. Good news, bad news! At least now the fault was worse, carrying out tests would be easier. I suspected a voltage  missing to the ECU, that the power supply fault was on the relay circuit, I was sure of it. After a discussion with the customer about current diagnostic costs, he set a limit to the repair, due to the age of the vehicle, that was rather restrictive.
CHALLENGING BUDGET 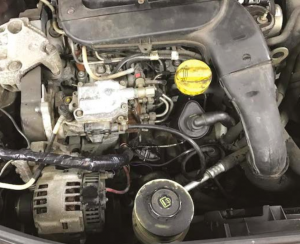 Luckily, the fault was now permanent and the engine was a non-starter, which allowed for consistent testing, finally. I began by re-reading the wiring diagram and made a plan of attack, after all, I was trapped between wanting to find the fix and trying to stick to a budget, wanting to do the right thing by my regular customer. I decided to start by testing for the voltage I believed to be missing at the ECU. Back-probing the ECU terminals, with the ignition on, I instantly chose a wire I had singled-out on the diagram that should have carried a supply voltage.
A resistance check of the wire between the relay baseplate and the ECU proved inconclusive, so believing I was on the right lines, I decided to try an old fashioned ‘wiggle test’ on the loom. At last, with the ignition on and whilst wriggling the loom, the voltage reappeared at the ECU, confirmed by the click of the fuel shut-off solenoid on the fuel pump. Due to the budget restriction, I didn’t have time to strip the loom back and find the wire that had been damaged, so I ran an additional wire between the two points and tested my repair – success! 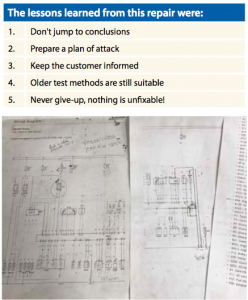