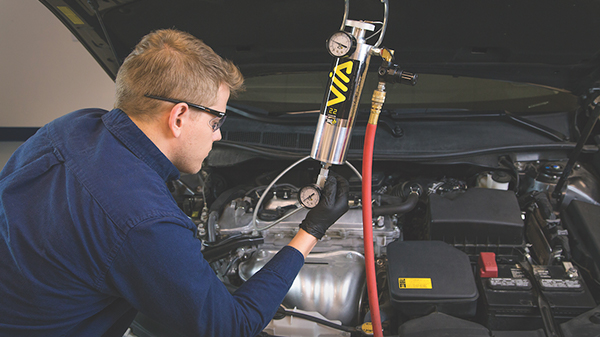 Out of sight but not out of mind

Cleanliness is next to godliness when it comes to engines and DPFs, which leads Rob Marshall to provide an overview about how they can be kept blockage-free.

‘Contamination’ has become a buzzword in modern car repairs. Yet, it has not been made-up by people wanting to sell you products that you do not need. Tightening exhaust emissions standards have ensured that cars have to ingest their own excreta, an unfortunate consequence of which are deposits collecting within not only the engine but also its ancillary parts. Modern engine design has not helped, either. Even if the owner follows the official manufacturer service intervals, they tend to be too long anyway. As most official intervals tend not to consider preventative maintenance to inhibit contamination build, the best you can do is inform and provide a package of decontamination options to your customer.

THE ORIGINS OF DECONTAMINATION – FROM BELOW

Being a complex mix of chemicals, petrol and diesel produce by-products of combustion. Some of these end-up in the engine oil, which holds them in suspension, until drained out at service time. BG Products is one such additive specialist that has performed considerable research on how deposits build beneath piston rings on healthy direct injection petrol engines (GDI), which result in a loss of compression. The resultant increase in blow-by gases contaminates the oil further, reducing its service life. Eventually, these deposits drop- out of the oil, resulting in the tarry sludge that technicians all know and hate. The resultant loss in lubrication system effectiveness tends not to be noticed, until a major stressed component (such as the turbocharger) fails. This is why many turbocharger suppliers will not honour warranties, unless the garage can prove that it carried-out further checks on the lubrication system. Luke Cross, the star of this issue’s ‘Tailpipe’, recommends the oil system detox treatment as an extra package that his garage offers.

THE ORIGINS OF DECONTAMINATION – FROM UP-TOP

A further issue is caused by the gases that enter the intake from the crankcase via the positive crankcase ventilation system. Naturally, an increase in crankcase blow-by results in more oily fumes entering the intake. These enter the inlet manifold and the viscosity improver content within the engine oil forms a sticky residue inside the tracts. While you would have thought this would not cause a problem, because inlet air passes through the air intake, Exhaust Gas Recirculation (EGR) adds a further complication. As diesel and GDI engines produce high levels of particulates, the resultant sooty exhaust fumes enter the intake via the EGR valve and the carbon particles become attracted to the sticky surfaces. Blow-by gases cause oil vapour to coat the carbon, which attracts yet more carbon. Should the fuel injectors lose efficiency, even more carbon deposits are produced. Ultimately, you are left with oily sludge-type deposits, which can build and restrict the intake manifold port and the cylinder-head inlet tract. The engine is, literally, suffocated of air as a result. As the process is gradual, the owner might not notice any difference. The engine management can compensate for the situation to an extent but, when the long- term fuel trim deviates beyond a typical 25% from its standard- setting, the engine warning lamp is likely to illuminate. The contamination can also affect swirl-flap operation, which, as we shall see later, has implications for throttle bodies.

As GDI engines not only rely on a high proportion of EGR, to keep their NOx emissions down, they tend to reach higher temperatures than diesels, which causes the oily residue to bake into a harder deposit with a rubbery consistency, especially within the cylinder-head ports.

Regular oil changes and the use of flushes should tackle most issues in the crankcase but the top-end situation is more complicated, especially on modern direct injection engines, which do not benefit from the cleaning effect of fuel washing down their intakes. Periodically using a good quality fuel injector cleaner is essential. JLM Lubricants highlights that it has developed a bespoke cleaner for GDI applications that not only removes stubborn deposits but also inhibits their reformation. The company claims that an advantage for a typical workshop is the fast speed at which the additive works. For diesels, more concentrated injector cleaners can be dosed directly into the fuel filter housing.

While optimising fuel injector efficiency helps to reduce exhaust particulates and, therefore, reduce inlet contamination, it cannot stop it completely. As the fuel does not touch the inlet on modern direct injection engines, a host of companies have developed specialist machines for the motor trade to help cleanse the inlet, mainly as a preventative measure. Typical examples include JLM’s Diesel Extreme Clean Toolkit Pro (sold in the UK by Kalimex), Forté’s Power Clean and the BG Platinum Fuel System Services that introduce chemical cleaners into the inlet, using specialist machines that are available strictly to the motor trade. FlexFuel Energy Development’s HY-carbon cleaner machine offers a slightly different alternative, by introducing hydrogen into the inlet, instead of chemicals.

However, much is down to the technician’s professional judgement. Even if these intake cleaners can clear a severely contaminated inlet, do you really want all that contamination to pass through the engine and into the catalytic converter and DPF? In these cases, dismantling and manual cleaning may be the only option. Crushed walnut shell blasting has become a popular treatment to remove stubborn GDI deposits within cylinder heads, for example, and is employed by both independent garages and main dealers. If you have discovered and rectified severe intake contamination, you may have to reset the engine management parameters, such as the fuel trim, to their factory values. Remember that intake cleaning is likely to increase DPF soot loading and many diesels need a road-test long enough to initiate a regeneration afterwards.

Reduced engine efficiency, due to intake contamination and fuel injector fouling, affects the DPF and is why blockages should be viewed as a symptom of an underlying issue. Consider also that intake blockages can affect the throttle body on certain diesels, which help encourage exhaust gas flow into the intake via the EGR. Some throttle bodies also incorporate sensors that are affected by sludge – take an intake air temperature sensor as an example. Should one be clogged, the engine might be making incorrect fuelling calculations, which can increase the soot loading within the DPF.

Subsequent diagnostic checks are vital. Checking the frequency between DPF regulations and evaluating typical drive cycles will help you to recommend a preventative maintenance programme to minimise crankcase, inlet and DPF contamination, especially for your low mileage customers. However, do not rely solely on the live data from your diagnostic tools. DPF pressure sensors can give false readings and making quick manual checks with an old-fashioned manometer is a sure means of verification.

While many technicians agree that a forced regeneration is a mechanically stressful procedure, several on-car DPF treatments are available. These vary from additives that can be dosed into the fuel tank, to chemicals that can be poured into the DPF via its hollow pressure pipes. Yet, be wary that many specialists, including Darren Darling of the DPF Doctor, strongly advise that over-dosing the fuel tank with regeneration aids can overheat and even melt the DPF core, therefore quiz the owner to ascertain if any chemicals have been previously added.

Contrary to popular belief, modern particulate filters cannot be removed and jet-washed with water. For a start, the resultant chemicals are not suitable to enter our sewage network. In most cases, you will have to remove the DPF and send it to a mail-order specialist, so why not offer the service in-house? DPF Recovery highlights that case studies from its customers show that the Evolution Flash Cleaner machine can cover its finance costs within a year, based on, approximately, two DPF cleans per week. Highlighting the profit potential, subsequent cleans have a variable cost of around £15 each, with fluid and filter changes being necessary between 125-150 DPF cleans. The waste must be disposed of in accordance with local regulations the same as you would with normal garage waste. No other special maintenance procedures are needed.

Apart from removing particulates, even from a severely blocked DPF, it can also flush out ash, which is impossible with the DPF on the car. Interestingly, although a pre-wash with a bio-enzyme additive may be required, the Evolution Flash Cleaner machine also eradicates oil contamination that can result from a turbocharger failure, for example. The machine has been refined to not only make it simple to use but it is also surprisingly compact, measuring 1400mm wide x 1000mm deep x 1700mm high, making it viable for workshops with restricted floor space.