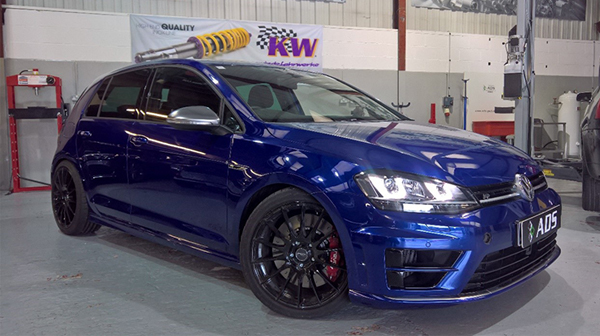 Dave Massey turns his attention to perhaps the most tuneable petrol turbo engine ever – the EA888, in a VW Golf R

In each issue of Autotechnician, we cherry pick some of the best performance tuning upgrades we’ve had in our workshop and we believe this month’s topic is truly unique and special.

It’s fair to say that this project quickly escalated above and well beyond the initial brief. It all started with a phone call into ADS and we discussed a simple but very impressive REVO stage 1 upgrade which takes the already formidable 4wd Golf R platform from 296bhp to 370+bhp. Stage 1 is designed to work in harmony with an otherwise totally standard car to give gains of up to 75bhp and 80lb-ft using pump fuel, over the standard 296bhp and 280lb-ft, with fantastic gains throughout the rev range. This gives better drivability and increased performance whether you’re on the road or the race track.

The MQB or EA888 engine is by far the most advanced and tuneable petrol turbo engine ever to be release into the VAG market and utilises 8 injectors, an ultra-lightweight design and water cooled exhaust manifold to combat extra fuel enrichment at full load, achieving unbelievable performance coupled with impressive fuel consumption. Audi engineers boast that the engine block wall thickness is as little as 3 mm (0.1 inch), and they point out that a competitor’s minimum iron-block wall thickness is nearly double that figure. Variable intake and exhaust-valve timing continues by way of cam phasors, and a two-stage variable-valve-lift setup – dubbed Audi Valve Lift – which has already been featured on some EA888 engines, works the exhaust valves inside the aluminium head.

This engine design isn’t, however, without its fair share of problems and has two main areas of weakness. In the manual gear box models the main Achilles heel is severe clutch slip, which by any standards simply isn’t up to the task of coping with stock power, let alone tuning, which is why REVO have developed a special lower boost map which is linear in power/torque delivery.

The new engine utilises a compact and lightweight, yet very capable, electronically actuated turbo that delivers an eyebrow raising 1.7 bar boost as standard, designed to deliver maximum torque at low engine rpm – which doesn’t help the weak clutch issue! So, if you’re in the market for buying one of these, make sure you elect to go for the 7-speed DSG – it’s superb and tonnes of fun.

The other main area of concern is the turbo charger unit. According to an article published by Motor Authority, the part number of the faulty turbo is 06K 145 702 N which they report is manufactured by IHI Turbo. The relevant engine codes are CJXB and CJXC. Motor Authority’s investigations point to a production fault for turbos made between April and May 2014, where there is a fault with the manifold sealing surface. Some owners of 2013 S3’s, outside of this date range are also reporting similar problems.

From my own experience, there has been several revisions from IHI on the design and strength of the main bearing housing in the turbo core to cope with such demands of high boost at low engine rpm’s. So again, if you’re in the market for a Golf R, make sure you have the latest revision of turbo fitted or it’s a late 2015/early 16 reg car with the latest part number. But that’s enough about the new engine design, let’s get back to talking about the project!

Hiking up the hatchback’s power

Like I said earlier, this job quickly escalated from a simple Stage 1 upgrade into a complete ultra track monster. The customer’s original brief, and I quote, “I don’t want too much doing to it as it’s going back in two years”. The residual value on these cars is so good that there are some unbelievable lease deals available from as little as £200 per month with 10k mileage allowance per annum. Yes I know, £200 per month you can be running around in a 300bhp hatchback! Crazy really when you think about it and as I’m sure a lot of you are now thinking, it’s a hell of a lot of car for the money.

Thankfully, this customer was serious about performance and after being so impressed and blown away with REVO Stage 1, they bought the car outright and has since spent over £10k on turning it into a track-eating weapon.

Naturally, we went from REVO Stage 1, which incorporated a Milltek cat back exhaust system, REVO’s in-house developed carbon air induction system and improved Stage 1 software; taking the power to over 380bhp and 350lb-ft torque. This presented us with three very obvious problems: Slowing down; Applying power through the transmission and going around corners. Luckily, we have in-house solutions for all these issues. We immediately went to work by fitting the 355mm REVO Alcon brake upgrade with stainless brake hoses, which now makes the car stand on its nose and has been rigorously tested and developed for fast road and track use. 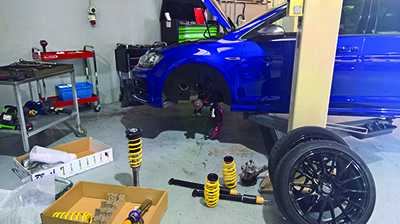 We also fitted a set of VW racing springs to improve handling by firming up the suspension and lowering its centre of gravity. The last piece of the jigsaw, and probably the most challenging, was the clutch, as a full working uprated kit hadn’t been fully developed or released this side of the Atlantic and supply wasn’t easy come by. I am indebted to my mate Alex at AKS who has helped engineer and develop an uprated clutch and flywheel – capable of coping with ‘abnormal power and torque’ of up to 440lb-ft.

To further aid the handling of the vehicle, especially on the track, we have also fitted the H+R front and rear anti-roll bar kit and KW variant 2 coil over suspension kit, which has now taken the overall spend over £12k and we’ve ended up with something quite special and unique.

With over 380 bhp and 350lb-ft torque, it’s fair to say we love this car and is a firm favourite with all the ADS team.