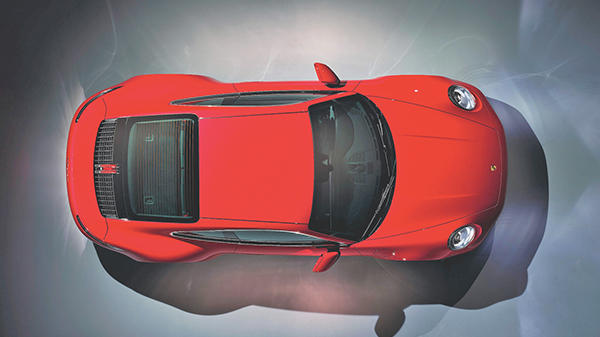 Making its debut in 1963, Porsche created an outline that has become time-honoured and memorable but it has been developed consistently and is not the ‘nightmare’ that its mechanical sophistication might infer, despite using pertinent amounts of ‘unobtanium’ in its construction.

As a sporting development of the original VW Beetle (Hitler’s ‘People’s Car’), slinging an air-cooled engine behind the rear axle line has been the 911’s cross to bear for its entire 56 years of existence. Race car technology suggested that placing the engine amidships would always be preferable from a chassis dynamics’ viewpoint. Yet, Porsche stuck doggedly to its layout, which, with time, would become a unique sales proposition.

While engine cooling changed from air to liquid, as late as 1999 and the introduction of the ‘996’ model, Porsche has always sought to manage its model’s ‘tail-happy’ handling characteristics and, in its current, eighth generation, thanks to a blend of ingenious mechanical engineering and modern electronics packages, its less welcome, throttle-off handling attributes have been replaced by a level of pure driving competence and driver feedback that is the envy of the sportscar scene.

Six cylinders arranged in a ‘flat-6’ configuration, also known as horizontally-opposed, or ‘boxer’, now displace 2,981cc and develop a hearty 444bhp and 387lbs ft of torque. It is enough for the 911 Carrera4S model to crack the 0-60mph sprint in around 3.3s, with a top speed in the region of 190mph, with a kerbweight of 1.5-tonnes. The modest weight, contrasted with several heftier rivals, also contributes to modest in class CO2 emissions (206g/km) and excellent fuel economy (30.7mpg; WLTP figures), despite the engine power being boosted by a twin-turbocharger installation. Both turbos are small diameter, high-spin types, which avoid low engine speed lethargy and provide instant throttle response.

Completely redesigned and expanded intercoolers help to optimise the power output. They are positioned directly above the engine, centrally beneath the rear engine lid, and they improve both air intake and exhaust flow. Engine efficiency and re-cooling has also been improved and the air filter, which had to be split into two and installed sideways within the rear mudguards of the previous generation, is now better located above the engine, which makes it easier to service.

Although rear-wheel drive is standard (Carrera2), the 4×4 system is popular for its exceptionally high levels of traction and customer perceptions of enhanced safety. In all cases, they drive through a Porsche-developed, 8-speed twin- clutch (wet system), automated-manual transmission, better known as PDK (Porsche Doppel-Kupplung) that has been standardised, with lower 1st and 2nd ratios in a closed-up set of six and its overdriven 7th and 8th gears helping to reduce the official CO2 levels. However, the shift mechanism has also been optimised with the inclusion of a regulated oil pump that allows for very fast gearchanges to occur, whether in ‘auto’, or paddle-shift ‘manual’ modes. If you have experienced the speed and efficiency of a typical DSG system, the Porsche alternative is ‘lightning quick’.

Intriguingly, the 911 rides on 235/40ZR tyres fitted to 19.0- inch diameter front alloy wheels, while 295/35ZR tyres are fitted to the rear 20.0-inch alloys. There is no transmission ‘wind-up’, despite the different rolling radii of either axle, and the weight distribution fore and aft is optimised (42%:58%). Both axles feature 330mm steel brake discs, clamped by 4-piston monobloc callipers, with a ceramic system available as an £8,000 option (a factor that helps its rarity) on a car listed at just shy of £100,000.

As mentioned above, it has taken Porsche 56 years to refine its rear-engined model’s handling envelope. A longer wheelbase provides stability; wider tracks aid agility and mechanical grip levels. However, lowering the centre of gravity has resulted in enhanced adhesion both longitudinally and laterally. Amazingly, increasing the resistance to body-roll has contributed to a 20% improvement in fuel economy. Introducing a raft of mechanical, hydraulic and electronics systems, which Porsche has developed to work in unison with all conventional chassis and suspension engineering (for improved stability levels and vital driver ‘feel’), has been instrumental in improving the balance between the notional opposites of performance and comfort. In this dynamic respect, Porsche is leading the entire sportscar industry.

Porsche Stability Management corrals the functions of ABS (anti-lock brake system), ASR (anti-slip regulation), MSR (engine drag torque control) and ABD (automatic brake differential), as well as pre-charging of the braking system and brake assist functions. Pre-charging the brake system enhances braking readiness, which in turn reduces stopping distances in emergency situations. However, it is an over- arching control that can be switched off in two stages by a press-on driver. In the first, PSM Sport mode, a greater, measured amount of wheel ‘slip’ is allowed, as well as larger yaw movements around the vertical axis, to provide greater dynamic responses for the driver. Switched into PSM Off mode, total driver freedom is enabled, with a safe fallback area should the ABS be triggered.

Porsche Torque Vectoring (PTV Plus, in the Carrera4S) uses targeted braking interventions on the inside rear wheel, as a means to enhance the vehicle’s steering behaviour and steering precision during particularly dynamic driving exercises. It offers a number of advantages, in particular when steering around bends. The inside rear wheel is braked selectively, as soon as the driver starts to steer, which means the rear wheel on the outside has a higher drive torque than the inside wheel. The difference produces a yaw moment on the vehicle that provides additional support to the steering. In targeting the use of the differential lock, traction is improved and the driver feels more connected to the process.

The electronically controlled flow of oil in and out of the hydraulic cylinder changes its stroke and causes the respective anti-roll bar to be preloaded to a greater, or lesser degree. All of these combined technologies have turned the 911 into one of the most dynamically sound sportscars in the world.

Summary: The Porsche 911 remains a surprisingly conventional sportscar in engineering terms. Intelligent management by electronic and mechanical means ensures that it is still a ‘driver’s car’ by all definitions, although it now features safety enhancements that do not detract from the car’s primary function, yet will intervene at an admittedly high level to keep the driver safe.