LATEST NEWS
You are at:Home»Article»Preparing for the digital revolution 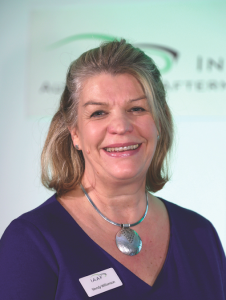 Wendy Williamson, chief executive of the IAAF (Independent Automotive Aftermarket Federation), detailed the challenges faced by the aftermarket in the digital era at Automechanika Birmingham last month. Autotechnician spoke to Wendy about the ongoing battles in Brussels to support free access to vital vehicle data in a digital age and opportunities that evolving technologies present.

All modern vehicles have telematic capabilities in varying degrees; cars of today are basically computers on wheels. IAAF’s Wendy Williamson tells us: “We are living in a world today where a black box knows where you are going, what speed you are driving… it’s very much a case of ‘Big Brother is watching you’ already. We are going to see those levels of connectivity increase even further, which will have an implication for the aftermarket. So, we need to make sure we are geared up for the future.”

On the technological front – everyone’s familiar with the demise of the internal combustion engine and the growing popularity of alternatively-fuelled vehicles and we need to be prepared for this. “The Jaguar i-Pace is a game changer, with a range of 300+miles,” Wendy believes, “although there’s a huge amount that needs to be done with infrastructure.”We talk about the advancement in charging and Wendy cites an Australian company who are driving the technology forward by enabling a fast charge in just ten minutes. “The advance of vehicle techology in the past 20 or so years is breathtaking when you look back. When I had my dear old Mini years ago, I would never have dreamt we’d have power steering, ABS braking, cruise control…now we have drowsiness sensors! Also, the EU have just introduced an alcohol test so that if you get in the car and put your hands on the steering wheel and you’ve had one too many the car won’t start!”

“All of these are great safety features but we need to make sure we continue to be able to repair vehicles and the VMs see the Extended Vehicle as the fairest route to repair vehicles in the future but it relies on their servers, their interfaces, their tools and permissions… If we allowed that to happen, we would totally lose unmonitored access to the vehicle.” I ask Wendy where we are in terms of challenging the VMs on this and she explains how FIGIEFA were asked by the EU commission to conduct testing, as part of the investigation of the VMs Extended Vehicle (ExVe) concept using the EGR valve as a working example. The objective was to test how independent operators can receive relevant real-time data related to the valve, perform a remote diagnostic test routine, and also carry out a remote temporary repair. The results are now with the commission and should expose the technical limits of the concept and bias towards the VM networks. Wendy praises FIGIEFA, “I cannot underestimate how important FIGIEFA is and the work it does in Brussels. They’re a small team but they do a great job of representing us throughout Europe and we’ll continue to be involved post-Brexit. It’s the only way we’ll have the UK represented.”

“Some of the VMS have already closed the OBD port on current production models… that’s clearly in breach of the Type Approval legislation. Workshops would need to get a certificate from the vehicle manufacturer, which would then give you a code to get you into the vehicle. But then of course, it’s up to them and they’ll know who they have given security clearance to, where and on what vehicle. It’s all about [having]unmonitored access.”

“We have changing vehicles and technological challenges, so we need legislation, we need Type-Approval and we need to have an alternative to the Extended Vehicle and the on-board telematics platform is still our goal. The most relative alternative is a neutral server to provide unmonitored access.”

“Block exemption ends in 2023 [legislation that enables independent garages to service cars within the warranty period, as long as OE quality parts are used and VM service schedules adhered to]. We’ve already submitted a roadmap to the commission – we’re really pushing for the same rights we enjoy under existing Block Exemption. If the VMs can remotely repair vehicles, you as a driver should have the ability to say that you want your independent garage to do it.”The IAAF has been keen to promote its ‘Your Car, Your Choice campaign’ this year to inform motorists that they can take their vehicle, from day one, anywhere for servicing without invalidating
the vehicle manufacturer’s warranty. Find out more at www.yourcaryourchoice.co.uk.

It’s not just technology that is changing the way we repair vehicles, we’re also facing lifestyle changes, where future mobility is likely to involve cars becoming a service rather than a commodity, as people move away from the ownership of cars, and their associated maintenance and repair, towards subscription services.

On my travels, I have had many discussions with garage owners and technicians about trade bodies – many of which directly benefit from memberships, but a handful have begun the conversation by saying ‘What do they actually do for me?’ Our trade associations are full of passionate people who have been involved in the industry for decades, many of which started out on the tools themselves. Much of their work goes on behind the scenes to promote an level playing field with the vehicle manufacturers and dealer networks, that frameworks are put in place so technicians are kept safe working on the latest technologies and relevant accredited training is created to ensure independents remain competitive. I urge you to research the industry’s trade bodies to understand how they could benefit you.