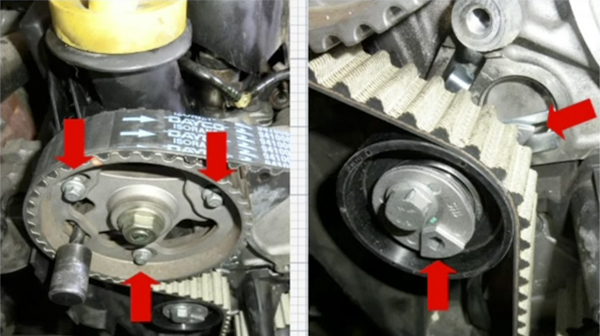 The 1.5-litre diesel engine used in the Mégane II features a timing belt driven water pump. As replacing the belt also requires the auxiliary drive system to be removed, Dayco recommends that all the system’s components – primary and auxiliary drive – be replaced at the same time.
This step by step technical guide will help technicians through the process, avoiding complications and ensuring a first rate professional job.
As with all primary drive system jobs, the work should be undertaken when the engine is cold. Ideally, the vehicle will not have been run for at least four hours.
Start by removing the engine cover, then the front right wheel and cowling to expose the auxiliary drive system. With a spanner, slacken off the belt tensioner, remove the belt and then the tensioner.
After removing the lower engine mount rod, securely support the engine before removing the upper rod, along with the entire upper engine mount. Release the retaining clips of the timing belt casing and remove its upper and lower parts. This will reveal the five retaining bolts of the upper engine mounting flange, which should then be removed to give access to the timing drive assembly: camshaft pulley, injection pump pulley, water pump pulley, crankshaft pulley and pinion and the belt tensioner.
After removing the plug on the front of the engine block, insert the crankshaft timing tool (1489) and rotate the crankshaft pulley bolt clockwise so that it rests on the timing tool. Insert the camshaft timing tool (1430) on the flange of the camshaft pulley before removing the crankshaft pulley.
Remove the timing belt tensioner, the belt itself and the alternator, followed by the plastic cowlings attached to the top and front of the engine. This allows access to the water pump, which can then be removed. 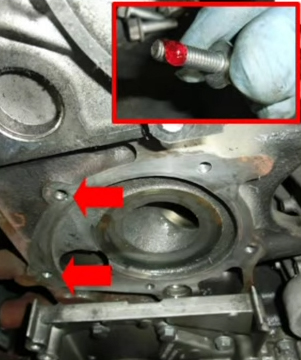 After flushing out the cooling system to remove any debris, accurately position the gasket and apply mastic to the two left hand retaining bolts as shown (figure 1) before fitting the new water pump from Dayco kit KTBWP5320.
Slacken off the bolts of the camshaft pulley, allowing it to turn, but remain centred. Then turn the camshaft pulley completely clockwise. 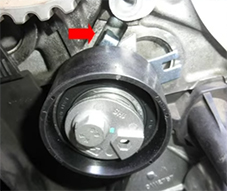 Fit the new belt tensioner, paying attention to its correct positioning with its tab located in the corresponding recess (figure 2).

Then fit the new Dayco High Tenacity ‘white’ timing belt, ensuring its correct direction of rotation and that the reference marks on the belt correspond precisely to those on the toothed wheels of the camshaft, injection pump and crankshaft (figure 3).

With an Allen key, position the pointer and temporarily tighten the belt tensioner.
Tighten the camshaft pulley bolts to a torque of 15Nm. Then remove the camshaft and crankshaft timing tools.
Turn the crankshaft clockwise through two rotations and repositioned appropriately, check the engine timing using the tools.
Now, loosen the bolts of the camshaft pulley so that it can turn but remain centred. Loosen off the belt tension bolt and reposition the pointer as in (figure 4) before tightening to a torque of 30Nm.

Check that the timing is correct again by torqueing the camshaft pulley bolts to 15Nm, removing the timing tools and turning the crankshaft clockwise through two rotations and reinserting the tools.
Providing the timing is correct, refit components in reverse order of their removal but check, and if necessary, replace the crankshaft pulley with Dayco DPV1138 and the auxiliary belt tensioner with Dayco APV2477. However, Dayco recommend the auxiliary belt 6PK1200 is always replaced. Crankshaft pulley bolt torque: M12 > 60Nm +100° or M14 > 120Nm +100°.
Finally, refill the cooling system, start the engine, check carefully for leaks and ensure the radiator fan is operating correctly.
Tags: Dayco, Renault Megane II Diesel, Timing belt kit
SHARE THIS