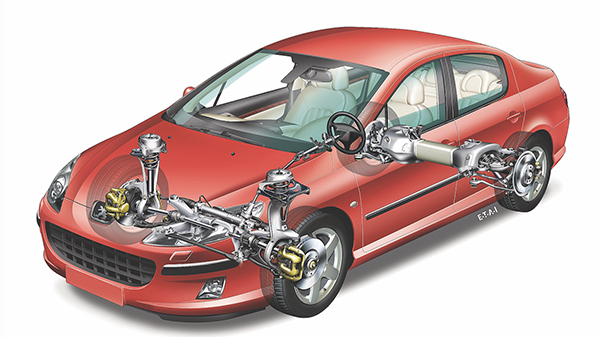 Staying on the road

With manufacturers developing and building ever-more complicated suspension systems, Rob Marshall looks into the supply and fitting implications that affect you. 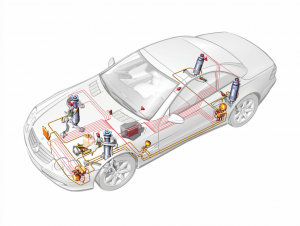 Many adaptive suspension systems require diagnostic interrogation. Pictured, is a schematic of Mercedes-Benz’s oleopneumatic Active Body Control, which utilises 13 sensors and an ECU to control roll, dive and squat, as well as offering a self-levelling facility.

While some workshops are concerned that their regular servicing work will be affected adversely by the mooted growth of EVs, they can take some comfort that the aftermarket steering and suspension markets remain buoyant. Federal-Mogul (MOOG) told us that it expects further growth. Naturally, increasing newer car model sophistication brings its own opportunities. The multi-link front suspension that is commonplace on many Mercedes-Benz, VAG and BMW cars, for example, can feature up to 40 different chassis-related parts, all of which can (and do) wear. In their never-ending search for optimum efficiency, OEMs are prioritising aluminium forgings over steel castings/pressings for certain suspension and steering parts, but the weight advantages are offset by strength. The ZF brand, Lemförder, advises that pressing out old bushes and inserting replacements can damage a light alloy control arm, even if the correct tools are used. This increases the risk of the casting failure through fatigue, once the part is reinstalled. Prior to removing the part, therefore, check if the manufacturer of the vehicle (or component) recommends that aluminium control arms are replaced and not repaired.

With modern cars being heavier, subjected to higher speeds, not withstanding the state of our roads (the cost of repairing pothole damage to cars has rocketed by 32% since last March, according to Kwik Fit) and the typical lack of mechanical sympathy of the archetypal motorist, maybe we should be unsurprised that steering and suspension repairs remain in high demand. The situation has resulted in fierce competition between replacement parts manufacturers and new players are entering the aftermarket every year. While this has led to competitive prices, be wary that this has been at the expense of quality in some cases. Getting a customer to agree to a repair in the first place, unless mandatory for an MOT Test pass, is not always easy, so can you afford to sacrifice your repute by fitting cheaper parts, only for the repair not to last? Yet, this is not the only consideration. Parts that are either worn, or of an inferior quality, can not only risk the occupants’ safety, by compromising the vehicles’ stability and handling, but Delphi reveals also that these components can also accelerate wear and tear on other parts of the vehicle, such as tyres, and can even worsen fuel consumption. Postponing repairs, or fitting white-box parts, therefore, can be a false economy as well as a safety issue – facts that are worth pointing-out to a hesitant owner.

When comparing the quality of its OE-fit track control arms to certain pattern components from the Orient, Lemförder’s metallurgical examination found that the copies contained little (or no) manganese, meaning that they were more brittle than the OE part. Therefore, the recommendation is to fit parts from a trusted brand, so you can be sure that the products that you install (and are guaranteeing) have been through comprehensive testing that followed the initial research and development phases. Reduce the risk of fitting counterfeit parts, by using a trustworthy supplier, which will not cut corners. TRW, another ZF brand, emphasises the importance of OE-quality, under its True Original marketing campaign, based on the concept that everything about the TRW brand is a true original, especially the part. Delphi, meanwhile, offers a useful extended repair solution, meaning that all ancillary parts that are required to install the individual component are supplied within the same box, negating any need to order smaller parts separately.

Product improvement does not stand still and OE parts suppliers admit openly that development of a steering/ suspension part does cease, once the vehicle is in production. 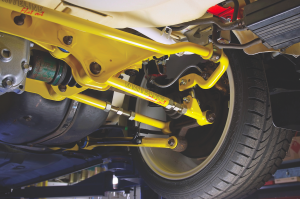 Changing a car’s ride-height alters the wheel geometry. This not only affects tyre wear but can also add extra load on the wheel bearings, reducing their life expectancies. Noise, Vibration and Harshness (NVH) can occur on vehicles, where the suspension has been lowered (or raised), due to the bushes working at a different angle than intended. Care should be taken to ensure that the wishbone/control arm bush pinch bolts are slackened and retightened to suit the new ride height with the vehicle weight on the wheels. This will ensure that the bushes are not preloaded torsionally when at the new ride height. Should you encounter a DIY lowered car especially, it may be worth you offering these services (not forgetting alignment) as an upsell opportunity, alongside inspecting the work in closer detail to ensure that it was well-executed. Consider also that OE bush design is intended to influence steering, such as offering a degree of rear-wheel steering, as well as changing front-wheel geometry under heavy corning, for example. Fitting harder aftermarket bushes could prejudice these beneficial handling features. 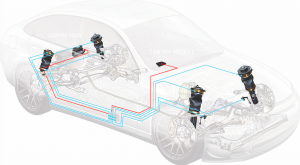 Like the dampers on a more conventional system, the rubber air spring assembly is a wearable part, with a typical lifespan of between six and ten years, which is influenced by mileage, climate and both driving and road conditions. When choosing a replacement part, the quality of the rubber is crucial. Arnott, for example, reports that it partners exclusively with Continental Contitech and uses premium Conti rubber, alongside other OE supplier components, such as seals, new polyurethane bump stops, VOSS connectors and heavy-duty crimping rings. This ensures that quality standards are maintained but the repair cost is kept competitive. On some vehicles (Citroën C4 Picasso rear suspension is a notable example), conversion kits from air to coil-spring suspension are available, which can be a satisfactory economical alternative. From a technician’s perspective, replacing air suspension is easier than a conventional coil-spring. Unlike oleopneumatics, the lack of a high pressure system means that no special safety precautions are needed; Arnott reports that most technicians should not have any problems fitting replacement air suspension systems, provided that the fitting instructions are followed. The main problem that arises is technicians lowering the car onto its wheels, before starting the engine and inflating the air bag. This results in the air spring becoming folded beneath the car, causing it to seat incorrectly. The suspension must be pressurised while the car body is supported. 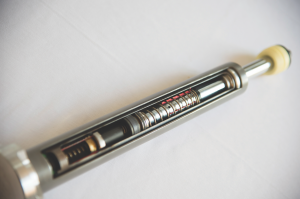 Aside from obvious mechanical changes, internal damper construction can be unappreciated – it is vital to replace like-for-like in many circumstances. Pictured, is a sectioned Double Hydraulic Shock System, which was developed by KYB for Citroën to provide a ‘magic carpet ride’ without the cost and complexity of the earlier oleopneumatic systems.

Therefore, you could fit an OE quality component with subtle differences to a factory-fitted suspension/steering part that you removed but this does not necessarily mean that you have the wrong part to hand. ZF aftermarket clarified that a typical supersession example is the rubber-to-metal front subframe bush used in several Volkswagen Group vehicles, such as the Seat Cordoba and Ibiza IV, Skoda Fabia, VW Fox and Polo models. For the same reason, the Japanese brand, KYB, explained to AT that it offers either OE specification dampers, or upgrades.

MEYLE told us that its engineers analyse OE parts and assess their potential for improvement to develop better parts, which is backed-up by a four-year guarantee on its MEYLE-HD range. MOOG has patented its Hybrid Core Technology to its enhanced parts that include innovations such as carbon-fibre reinforcement within its ball-joints, control arms and tie-rod ends, the main advantage of which is to reduce the amount of radial deflection (‘play’) generated as the components wear, thus extending their lifespans. Such parts are packaged in a zany bright yellow packaging and are being introduced progressively into the marketplace. 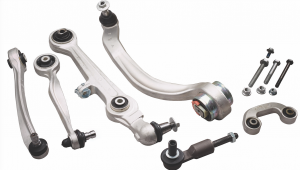 Look at data: Check that bushes can be replaced or renew the complete component. Ensure that any extra parts, including fixings, are ordered. Heed fitting data, including torque settings and suspension alignment information.

Wishbones/control arms: Tighten pinch bolts on parts with horizontal bushes, with the vehicle’s weight supported by the suspension, not with the wheels dangling. This can pre-load the bushes, once the suspension is at its normal ride-height.

Bush installation angles: Rubber to Metal bushes possess features to maintain low NVH levels and possess a specific angular alignment, when they are reinstalled. Ignoring the correct angular position will lead to poor performance of the bush and reduce its operating life.

Use a torque wrench: Use the appropriate data and a torque wrench that is calibrated regularly. Fasteners should also be torqued with the full vehicle weight supported by the road wheels.

Avoid reusing old fasteners: Nyloc nuts, whether fitted to the ball joint or pinch bolts, are designed for single use only. New nuts should be used on installation and torque- tightened to the manufacturer’s recommended values. New split pins should be used, where necessary.

Do not omit parts: Ball-joint heatshields should be refitted, or replaced, because they protect against high temperatures from braking. Removing the heatshield risks decreasing rubber gaiter life, resulting in premature failure of the joint.

Use the correct tools: Utilising a hammer to release a ball-joint that will be reused, for example, can damage it sufficiently to shorten its life. Use a splitting tool that will not damage its gaiter. When removing springs from dampers, a gated spring compressor tends to be recommended for safety reasons.

Replace in pairs: When replacing any suspension component, replace in axle pairs to maintain safe, balanced handling and ride comfort. This becomes more critical, when the design parameters of a replacement part have been superseded due to ongoing product development.

Final alignment: Four-wheel alignment should be carried out, according to the manufacturer’s alignment procedure, after any steering or suspension repair.

Consider ADAS: On newer vehicles, consider that ADAS calibration tends to be required after any steering and suspension repair has been completed and is an important part of your duty-of-care obligations.