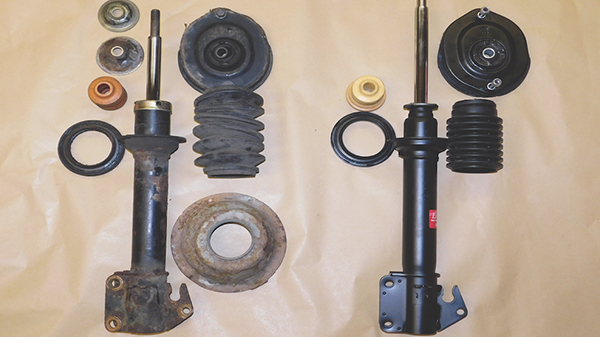 Unless you discover an obvious broken spring, or leaking damper, there is precious little else to go wrong on a typical Macpherson Strut – or is there? Rob Marshall focusses on how you can arm yourself with information to persuade your customer that preventative maintenance is in their best interests.

For all the sophistication that the modern motor car has introduced, many drivers think that the car knows when its shock absorbers (or, more accurately, dampers) are past their best. While highly specified models with adaptive dampers, or air suspension, can provide a dashboard warning in the event of a fault, most cars do not have this provision. The onus, therefore, rests on the knowledgeable technician to persuade owners that replacing worn dampers is in their best/safest interests, even if the existing items scrape through an MOT Test.

Even so, modern cars have not helped. The relatively stiff suspension on many models has made it almost impossible to carry out a traditional ‘bounce test’ to check damper performance, without leaving an impression on the bodywork. Worse still, damper efficiency is not even measured at MOT Test time and we also know of several garages that have abandoned their wobble plates, which assess shock-absorber (damper) effectiveness and provide a courtesy print-out. Currently, only dampers with severe leakages, worn bushes, or mounting issues should fail the inspection. Broken/insecure/ unsafely modified springs also represent either Major, or Dangerous defects.

ZF Aftermarket (known also for its Lemförder and TRW brands) states that damper deterioration is a gradual process that is not defined solely by leaks. The rate of wear is affected by not only mileage and time but also driving techniques, because harsher acceleration and braking cause the dampers to work harder and run at higher temperatures. After all, a damper creates heat as it works.

KYB is more specific and recommends that dampers should be replaced after 50,000 miles. By that time, the oil within the damper would have passed through the internal valves more than 75 million times. These valves are deep inside the damper and are made from very thin metal; KYB uses the analogy of bending a wire coat hanger repeatedly to demonstrate how the metal weakens over time. The resultant increased oil flow through them reduces the damping qualities. KYB agrees with ZF that, because the process is gradual, most motorists do not notice that, for example, their stopping distances increase by as much as six metres at 50mph. Febi, part of the Bilstein Group, also reasons that worn dampers cause uneven, patchy tyre wear as well.

ZF highlights that certain vehicle specifications and even modifications place extra stresses on the dampers. Large- diameter wheels (especially when shod with low-profile tyres) reduce the sidewall height, which means that the tyres flex less, so the dampers are confronted with greater forces. Aside from risking other technical complications (including those of wheel alignment and underside impact damage), KYB reports that standard specification dampers can tolerate up to 30mm of lowering; any further reduction in ride-height dictates that specialist short-stroke dampers are needed. It is worth noting, however, that parts which are not used in the ways intended by the manufacturer can affect the warranty, so it is worth checking the guarantee arrangements with your supplier and informing the customer accordingly, if working on a car with modified suspension.

Obviously, ordering the correct damper is crucial. Be wary that different damper specifications might exist between different engines of the same model. For example, a low- performance model might possess oil filled dampers, whereas a sportier alternative within the same model range might have its dampers pressurised with nitrogen gas. This might present a possible bolt-on upsell opportunity, where you can recommend an OE quality gas damper in place of an oil-filled unit, which does not affect neighbouring components.

KYB told AT that nitrogen-pressurised dampers still contain hydraulic oil, but the gas prevents any external air from entering and mixing with it, the tiny bubbles resulting from which reduce damping effectiveness. Nitrogen is also an effective heat dissipater, meaning that the oil keeps cooler and retains its relative viscosity as it flows through the valves, which is especially useful for a car that is driven enthusiastically. From a workshop perspective, there is no extra labour time involved with fitting a nitrogen-pressurised damper, over one that was oil filled only.

As with most aftermarket parts, the risk of counterfeit, or low standards, continues with suspension parts. OE quality companies report that, in their own testing of budget dampers, they discovered inferior corrosion coatings on the damper piston rod that, from a workshop warranty perspective, will increase the risk of a damper leaking. Other issues relate to sub-standard construction and inferior noise, vibration and harshness (NVH) inhibiting performance, compared to the OE quality standards.

THE IMPORTANCE OF EXTRAS

Check with your damper supplier about what is included. In almost every case, a replacement top mount lock nut is supplied but also consider that many manufacturers recommend that the damper securing nuts and bolts are renewed as well, especially if the latter are self-locking but lack nylon inserts. Should this be the case and replacement fixings are not provided, consider that standard replacement nuts and bolts might not possess the correct tensile strength. Therefore, if still visible, check the bolt head for any markings. ZF Aftermarket underscores Lemförder’s service packs, which contain new fasteners for not only the replacement dampers but also for peripheral components that must be disturbed during the procedure.

A fitting/service kit is also mandatory. Again, check if it is included. These tend to contain a new replacement piston rod protective gaiter, which needs replacing because dirt can not only remain within the old gaiter but can also build on the bump-stop within the strut assembly. More accurate terminology for a bump-stop is ‘spring assister’, because it works in conjunction with the spring towards the limit of compression, to slow movement and prevent violent contact between the strut and the body/subframe. Therefore, they play crucial roles but, just as dampers wear gradually, spring assisters’ materials degrade and lose their effectiveness. Your service kit should include suitable replacements.

Ancillary components, such as anti-roll bar links, may also be disturbed during the operation, so it is worth replacing any ailing joints, or bushes that you might encounter. For longer- lasting joints and arms, MEYLE highlights its HD range of joints, while MOOG offers its Hybrid Core bearing technology, both of which present ideal upsell opportunities as well. First Line has developed its uprated anti-roll bar link range for LCV models and now stocks a range of 60 new part numbers. All of the quality manufacturers that we contacted recommend the best practice of changing worn anti-roll bar links (as well as ball joints and suspension arms) in axle pairs to ensure consistent and balanced performance. Obviously, suspension arms, ball joints and bushes are topics that we shall consider in more depth in a future article but referencing their importance within this context is relevant, in case you disturb them while replacing dampers and springs.

TOUGH AT THE TOP

In recent months, Delphi Technologies has advised technicians not to ignore the top mount. Often forgotten, not only does it incorporate a bearing on many struts that acts as a steering pivot but it also acts as a cushion to reduce noise, vibration and shock from being transmitted into the cabin. They are hard-working parts, too. Not only does constant movement cause them to wear gradually but deterioration is also exacerbated by mechanically unsympathetic driving, such as striking potholes, or kerbs at speed. Exposure to a wide range of atmospheric conditions, such as moisture, salt spray, humidity and temperature variations is also not appreciated.

Like dampers and spring assisters, top-mount deterioration can also be gradual. Yet, they tend to be inaccessible within the suspension tower and, therefore, are hard to inspect. Even so, severe wear, or even separation of the rubber/metal components, can manifest themselves in several ways. Knocking, or clunking, at low speeds may be blamed easily on an anti-roll bar link, when the top-mount is the real reason. Seized bearings can also cause the steering’s self-centring action to become sluggish. Uneven tyre wear and poor suspension alignment can also result from excessive top- mount movement.

As top mounts tend to be relatively inexpensive parts, compared with the retail labour costs charged for separating the strut from the car and dismantling it, you should give serious consideration to replacing them whenever you perform a damper change. As with dampers, replace top mounts in axle sets and insist on fitting OE quality parts.

Broken springs pose a particular safety risk, because a portion of sharp, compressed wire risks being ejected at high speed as you dismount the strut. Take extra care and consider compressing the spring in-situ to guard against potential injury risk. Worn springs can cause the ride-height to reduce and this is one of several reasons why springs should be replaced in axle sets.

Both ZF and KYB told us that coil spring breakages are becoming more popular for several reasons, which vary from traffic calming measures and deteriorating road conditions to car manufacturers making their cars heavier. While manufacturers have strived to make components as light as possible, weight saving measures have resulted in different shapes, sizes and wire dimensions being used for springs, along with heat and surface treatment processes (such as shot peening) to achieve the OE performance and longevity characteristics. Corrosion is a serious enemy of springs, encouraged greatly by the UK tending to use more road salt than many other European countries. While demand for replacement springs tends to be higher in winter, check over springs carefully for corrosion as you renew dampers, to ensure that they are suitable for reuse.