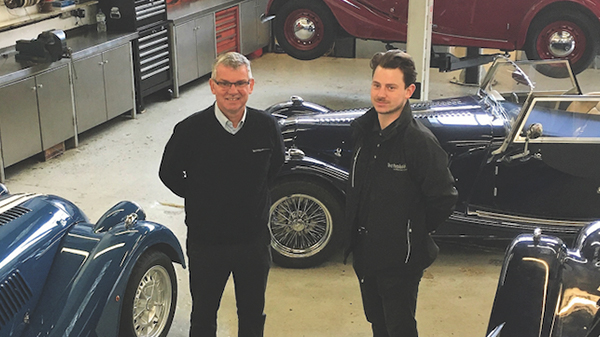 Tailpipe – In conjunction with Brian Gateson of Techniques

Tales from the workshop floor – In conjunction with Brian Gateson of Techniques, from Stotfold Hertfordshire. Iain Robertson felt embraced by the inescapable enthusiasm that allegiance to a classic car marque can extoll, while also comprehending the value of an independent specialist.

Respect, fascination and an unceasingly curious mind has ensured that Brian Gateson’s mechanical expertise is as vital a characteristic of his 32 years old business, as his stoically supportive customer base. The glue that connects it is Morgan, a specialist sportscar maker, from the Malvern Hills, that has seldom done anything more advanced than to work a traditional car-making oracle. Even when renowned industrialist and TV ‘Troubleshooter’, Sir John Harvey-Jones, visited the Morgan factory in 1990, his advice, while largely apocryphal, was only slightly engaged with…Morgan has almost always done things in its uniquely quirky and British way.

‘Almost’ is the key word; following 110 years of Morgan family history, in 2019, the carmaker was sold to Luxembourg-based InvestIndustrial and a new chapter in its history commenced. “The impact of a corporate management style,” Brian highlights, “is already being felt by Morgan dealers and what remains of the Morgan family connection. The emphasis is now on developing new products, enlarging its market presence and increasing volumes, aspects that the Morgan family never pushed. I am very proud that Techniques is an authorised service centre for the brand.”

Judging by the wide spread of Techniques’ reputation, allied to support of the Morgan Owners’ Club and a more than passing interest in the brand’s motor-sporting past and present, Brian, his son James, wife Tracy, mechanics Peter and Paul, trainee Charlie and Jaqueline, who works the front-of-house, know the value of their combined contributions. Yes, they are all enthusiasts but so, too, is each of their local, national and international customers.

While there is essential space for traditionalism within Brian’s company, it is a business that survives by its mettle. “We are immensely proud of being an independent garage and we work extremely hard to maintain our status. Yet, I am aware increasingly that we live in troubled times. I am fortunate that my son has joined me in the business and that he shares my business ethics, which motivate the entire staff. However, growing our enterprise has proven to be difficult, with a genuine shortage of younger, or even skilled personnel prepared to come on-board and learn the traditions of mechanics, chassis engineering and even hands-on bodybuilding.”

He continues: “We employed a former F1 staff member, whose career came to a mutually agreeable end, when we discovered that he could not install a distributor; he was insufficiently skilled. Whether this is endemic in society, education, or any business speciality, it is abundantly clear that not enough people care enough about core knowledge and an ‘it’ll do’ attitude is singularly unhelpful.”

While Morgan is a brand underscored by its ‘traditionalism’, Techniques is also a TVR service specialist. The sometime Blackpool-based, hand-built sportscar manufacturer, like Morgan, has a most supportive owners’ club that is unsurprisingly grateful that the Gateson family business exists. Although not describing himself as a ‘hobbyist’, Brian and Techniques is involved actively in the motor racing scene, naturally with Morgan taking a central role. Yet, if you want a new racing car, or even one with a previous history, Techniques has not only a small stockholding but also prime access to Morgan’s motorsport lineage. The Techniques Trophy is a much-prized annual award at Bentley Drivers’ Club events held at nearby Silverstone Circuit and the company also sponsors the Morgan Sportscar Club Speed Championship (Speedmog).

“Our strength lies in our independence,”states Brian.“We are a small business but we are also highly specialised and, no matter by how much the motoring scene will change in coming years, we recognise that there will always be a requirement for skilled automotive exponents. We also comprehend our role as information provider, tutor and promoter of the independent garage scene, along with the UK’s other staunchly proud independents.”

When you log onto the ‘techniques.uk.com’ website, you can appreciate that being a specialist also demands a broad palette. Quite how such a small team can manage such a large range of responsibilities is simply inspirational…but, then, that is what being an independent garage is all about.