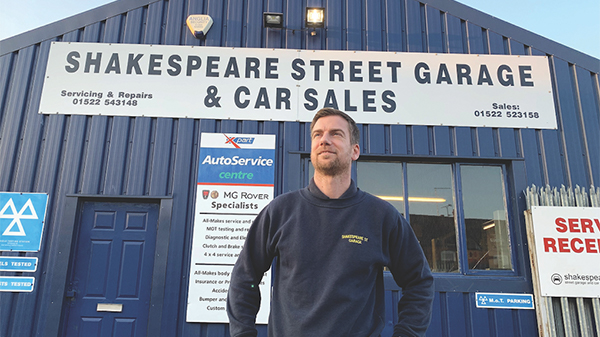 Tailpipe in conjunction with Tony Richardson

In conjunction with Tony Richardson, owner of Shakespeare Garage, an independent vehicle sales and service specialist from Lincoln, Iain Robertson presents anecdotes from around the garage scene, peppered with Tony’s memories and advice.

The motor trade has produced some howlers over the years, among which was the BMW Mini that could operate on a warm beverage; it was rebadged as the Mini CooperT, for obvious reasons. On the other hand, on the day that the British Mint announced that both 1p and 2p coins would be dropped from circulation, Seat Cars announced that a coin-op slot positioned next to the parking-brake lever would help to reduce car overheads and get rid of unwanted copper coinage.

Of course, nobody possessing a modicum of mechanical knowledge would fall for any of these pranks…or would they? Tony recalls an elderly gentleman, who brought in his Perodua car for service and presented a letter to the service receptionist, who read it and could scarcely believe his eyes: “He came into the back office, where I was working, and gave me the most professionally created letter on what appeared to be a Perodua letter-head.”

Tony continued: “It stated that, as the valued customer had reached his 70th birthday, he could ‘take advantage of a Malaysian optical development that would allow his windscreen to be swapped to one carrying a prescription NHS optician’s lens certificate’. As elaborate as the prank was, it transpired that the gentleman’s grandsons had photoshopped the company logo and placed it on a very official-looking letter. When we explained it to the elderly customer, he said nonplussed, ‘I’m forever leaving my spectacles at home, when I go out. I’ll not do that again!’”

While Tesla boss, Elon Musk, made an announcement on Twitter, that his company was going bust, after its share values dropped dramatically, he also stated that ‘the company was so broke, you would not believe it!’. Not unknown for being outspoken, he posted the tweet, accompanied by a photograph of him passed out and surrounded by bottles of ‘Teslaquilla’. As it happens, Tesla has been riding something of a crest of a wave recently, although its financial position is often rumoured as ‘shaky’.

Tony recalls another incident with one of his service contract customers, a local funeral parlour and its unliveried Ford Transit (used for collecting the bodies of deceased, prior to preparation for funerals). “The van had suffered a breakdown,” he remembers, “so, we sent out our recovery truck and hauled it back to our Lincoln city centre garage. Fortunately, I had been warned by the funeral director that a shop dummy was within one of the temporary coffins within its load bay.

“We put our best mechanic onto the task of repairing the van’s starting problem but, in conjunction with the undertaker, we also put our apprentice to work removing the boxes from the rear of the van. When the lid of the first one came ajar, as he struggled to remove the coffin, he spotted the fully-clothed mannequin inside and, believing it to be a customer of our client, he ran screaming from the workshop. It took several cups of sugary tea for the lad to recover and appreciate that it was an unfortunate prank!”

Hyundai has been among the nation’s pranksters and, on the back of its online ‘Click-2-Buy’ process, in 2017, it announced that its cars could be delivered by drone… Triumph Motorcycles announced that it was trialling a steering wheel, rather than handlebars for its next new motorbike… meanwhile Nissan suggested that its Qashqai could be fitted with a GYM button that would help motorists to lose weight, while driving, as depressing it would switch off the power steering and stiffen-up the pedals and gearshift, in the process increasing exertion levels.

As Tony says: “It’s all great fun but you have to be careful that these things do not backfire, because, while we do not like to admit it, people are incredibly gullible!”