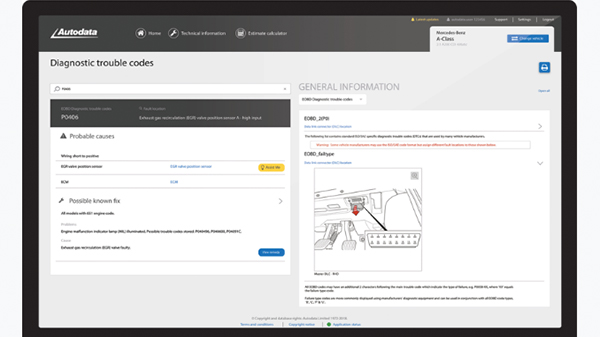 Without accurate technical data, even the most talented technician will come a cropper. In this feature, Autodata deconstructs the DTC (Diagnostic Trouble Code)…

As soon as a fault is detected, DTCs are stored in the memory of an on-board module and if the fault is critical or emission related, the malfunction indicator lamp (MIL) is illuminated. Autodata says that knowing how the DTC is constructed can assist in pinpointing where and what issues exist.

The Society of Automotive Engineers (SAE) and the International organisation for standardisation, more commonly referred to as ISO, are the regulatory bodies responsible for approving and standardising DTCs. With the introduction of OBD-II in 1996, all occurrences of the standard DTC configuration begin with a letter, denoting which system the DTC refers to; B-Body, C-Chassis, P-Powertrain, U-User network. A DTC of P0117 indicates the powertrain.

Based on the P0117example, the fault stems from the powertrain and it is a SAE/ISO controlled DTC. The third character suggests which area requires inspection. By dividing the vehicle systems into categories and numbering them 0 – 9, in this case, the engine coolant temperature sensor requires investigation.

There are numerous variables of the DTC’s fourth and fifth characters. They can highlight the number of a cylinder or bank, if the fault is intermittent or permanent, low or high input signal, or a short or open circuit. In DTC P0117, the fourth and fifth characters suggest a low input, the fault is situated in the powertrain, it is a SAE/ISO controlled DTC, stored in the engine management system with a low input signal from the engine coolant temperature sensor.

The conventional 5-character DTC could have another two characters at the end to indicate the failure type – a DTC of P0117 with an additional 07, implies a mechanical failure.

DTCs are not the answer to the problem, but a starting point to finding the problem

Autodata is keen to point out that knowledge of how the DTC is constructed can give the technician a better understanding of how to approach a fault but as with any diagnosis, components should not be replaced with DTC references alone. The vehicle wiring diagram should be consulted and surrounding components must be taken into consideration before a part is replaced. 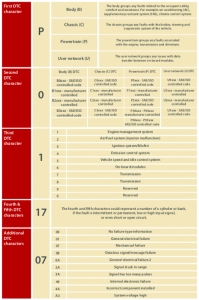