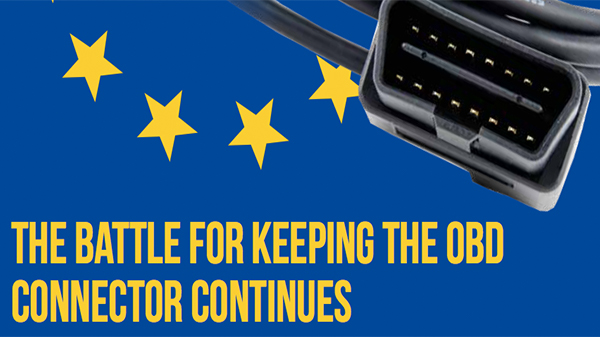 The battle for keeping the OBD connector continues

The Independent Automotive Aftermarket Federation (IAAF) has welcomed many of the amendments approved by the European Parliament’s Internal Market and Consumer Protection Committee, as part of the forthcoming type approval legislation.

These relate to the diagnostics, repair and maintenance of vehicles and are an important step towards improving the legislative framework for independent operators. Over 184 amendments were approved and included several major revisions, the most important of which is keeping the OBD port to the vehicle open and accessible.

This is just the beginning of a lengthy battle to preserve the small, but very important, OBD connector, which enables technicians to efficiently diagnose vehicle faults.

The radical changes proposed by type approval legislation will
have severe consequences on consumer choice. If it goes ahead, independent garages will no longer have unmonitored access to the OBD connector as it could be controlled entirely by the VM through remote diagnostics performed with the use of their servers.

Clearly these alternatives create the risk that some VMs may utilise a legislative loophole and gain a monopoly on access to technical vehicle data, controlling the cost of information and potentially shutting out independent workshops entirely.

If the IAAF and the other trade organisations fighting against the type approval proposals are successful then under legislation, VMs would have to continue to fit the OBD connector in new models of cars and consumer choice would remain protected.

“The IAAF continues to play a very active role in these discussions, as our aim is to improve the legal framework conditions for competitive RMI throughout the life of a vehicle. We are at a critical stage and we will work alongside other Federations and FIGIEFA in Europe to ensure the automotive aftermarket’s voice is heard.”