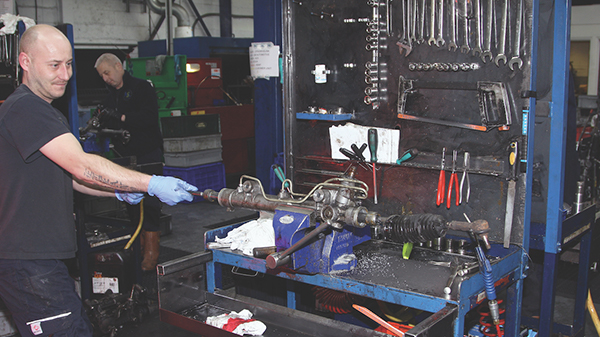 The benefits of remanufacturing

It is good not to be wasteful. While car manufacturers tempt their customers to replace their new car every few years, the inconvenient truth is that keeping an older vehicle running, instead of scrapping it prematurely, is far better for the environment and, very often, owners’ wallets. Vast sections of the aftermarket have realised this for decades. Carwood considers that, because the average motorcar is not only increasing in age but also sophistication, often the only viable way to ensure a supply of high-quality spare parts throughout its lifetime is via remanufacturing.

Shaftec, another well-established remanufacturing company, agrees and expounds: “Remanufacturing is the way forward on many levels: it is better for the environment, as it uses less energy and raw materials; it is a more financially efficient solution and is often the only way to keep older vehicles on the road – essential in markets with ageing vehicle parcs.”

ZF’s remanufacturing component range is also vast and, compared to new parts, its remanufacturing programme saves between 50-90% of raw materials and offers a 90% energy saving. Carwood reveals similar figures in its considerable remanufacturing portfolio, which covers fuel systems to rotating electrics: it says that remanufacturing saves up to 70% of the resources and consumes approximately 85% less energy.

From a consumer viewpoint, Carwood admits that, while there is still a lack of awareness of the potential benefits and the essential differences between used, reconditioned and repaired products, there is a growing acceptance that we cannot afford to keep using and disposing of valuable natural resources.

With increasing pressures to reduce their corporate CO2 emissions, Vehicle Manufacturers (VMs) also realise the advantages that remanufacturing brings, although the financial benefits are not lost on them. Toyota First states that, aside from the environmental advantages, its remanufactured parts offer higher profit margins, costing between 20 and 40% less than a new component.

Distrigo, the multi-brand parts distribution network from Stellantis (formed earlier this year with the merger of PSA Group and FCA), reaffirms that the cost savings can be up to 40%. Its Re New remanufactured parts include brake callipers, DPFs, air conditioning compressors, engines, transmissions, radiators, turbochargers and fuel injection components. The scheme has been expanded recently to include electrical items, such as multimedia units, ECUs and instrument clusters.

A problem of definition…

Despite remanufacturing appearing to be a win-win, it has taken considerable time and debate to define. For example, a remanufactured item is clearly different from a used item that has been cleaned, or simply repaired. The overall accepted definition of a remanufactured part is one that fulfils a function, at least equivalent to that of the original part, and is restored from existing core with standardised industrial processes in line with specific technical specifications. It also is given the same warranty as a new part.

While this formal definition is useful, it contains some vagueness. Yet, ‘Standardised industrial processes’ must differ between component groups: remanufacturing a starter motor is, clearly, a very different proposition to remanufacturing a driveshaft, for example. Even so, it can also mean that one remanufacturer of rotating electrics, for instance, can have different processes in place, compared to a competitor, because technical opinions can differ. Attitudes to core quality can also differ: one remanufacturer may view a damaged part as suitable for remanufacturing, whereas another might consign it to the scrap bin. Shaftec reports that it is very careful about its core evaluation at the beginning of its remanufacturing process, especially as it reduces the tendency of core being rejected at a later stage.

The Remanufacturing Council admits to AT readers that the growing interest in remanufacturing is beginning to require more formal definitions, hence the interest in the standards organisations globally, including the BSI. However, for motor cars, the only remanufacturing sector that possesses a formal British Standard, is that for remanufacturing combustion engines. For more information on this topic, consult our editorial from last year: https://autotechnician.co.uk/ remanufacturing-a-subjective-definition.

OE-quality as a minimum…
Any reputable company you choose must deliver remanufactured parts at least to OE quality, as per the formal definition, and have robust internal procedures in place to deliver the required standards. As such criteria are not revealed by the VMs directly, many companies use ISO accreditation to prove the effectiveness of their internal processes.

Even so, garages are tempted by brand-new low-cost copy parts that may be cheaper than a remanufactured item. It also negates the need to return the old part and pay a surcharge that might not be refunded if the received part is found to be unsuitable for remanufacturing. Yet, the reason why many of these parts are relatively inexpensive is that they do not comply with OE standards and even remanufacturers tend not to wish to work with them.

“While there are new options available more cheaply on the market, in the long term it may not make commercial sense to go down this route” argues Shaftec, which refuses to remanufacture any non-OE quality core that it receives, because: “In terms of quality, these parts do not have the integrity… to offer performance as the vehicle manufacturer intended”

As a consequence, the company argues that it cannot guarantee the quality of a remanufactured item, based upon a non-OE-quality part. As an example, it is unknown to which pressures a copied casting is designed to withstand.

Joe Kripli, President of the Automotive Parts Remanufacturers’ Association, is confident about the quality of remanufactured components. He justifies his stance to AT readers, admitting that: “The reason we can say that a Remanufactured Product is better than new is because we understand why it failed in the first place and we improve on that component, thus eliminating the inherent warranty issue: Example, an electronic module fails because it overheats, the diode used during production was rated at 85oC operating temperature, we replace it with a diode rated at 125oC and the inherent warranty issue is fixed. You might ask yourself why didn’t the OEM think of that? They probably did, but that may have been cost prohibited in their business model.”

Autoelectro cites the 130 amp alternator, employed on a variety of 2.7-litre Land Rovers, as an example, which is prone to stator failure. Therefore, the company uses bigger stator windings in its AEK3028 remanufactured replacement, which not only solves the defect but also upgrades the maximum output to a minimum of 150 amps. Carwood adds that a remanufactured component can also incorporate any updates, or improvements, that the original manufacturer made during that part’s production run.

While the air suspension specialist, Arnott, supplies many new parts, it also remanufacturers air struts. While it admits that, within its speciality, the scope for enhancing an OE design is less for a remanufactured product than designing a new replacement, it uses superior materials in its remanufacturing process. For example, it replaces flexible rubber bellows with the highest quality Continental ContiTech rubber, to increase service life. To prevent leaks, it also employs longer-lasting seals, and heavier-duty crimping rings.

However, going the extra mile can mean more than just addressing an inherent defect. It could mean simply having
a UK-based technical department that responds swiftly to enquiries, be it online, or telephone. It might also be defined by offering a warranty that is more generous than that provided with a new genuine part; Shaftec’s five years-long guarantee on driveshafts and CV joints is a notable example. You may think of it as free delivery, as offered by Distrigo, for example. It can also mean offering the best stock availability and being proactive to introduce new remanufactured parts for newer vehicles, as well as decent cataloguing and being open with sharing technical information. Autoelectro asserts that,

“Our website catalogue contains all kinds of technical information from installation advice and wiring diagrams, plus images that are designed to assist with correct product selection and installation.”

Training is also an advantage, especially for niche parts and this is an area that Arnott sees as it offering superior service, as well as the open provision of installation literature and videos.

Extra services can also represent going the extra mile, especially if you are a specialist in classic, or rare exotica. Carwood highlights its electrical rewind service is as an example of this, which facilitates the remanufacturing of any kind of automotive motor and generator. The service can also upgrade classic, vintage, or veteran systems with more modern materials and it cites Nomex as an example, which offers superior thermal endurance compared to the original materials used in older rotating electrics.

Carwood reports that remanufacturing is key to every automaker’s strategy and will remain so for the long term. Aside from the cost and environmental benefits, it views the growth of alternative powertrains as being a future opportunity for experienced remanufacturers. It cites high-value items for EVs, such as the battery pack and electric drive motors, that will offer significant future growth potential for remanufacturers, despite such vehicles containing fewer components than today’s combustion-engined models.

Autoelectro theorises that, while EV sales are rising, combustion engines will be used for a long time post-2030, especially if synthetic fuels become mainstream. The Bradford-based rotating electrics specialist anticipates further technology advances for charging and stop-start, as well as hybrid and 48v drive systems. The company reports that it is in an excellent position to accommodate remanufacturing demand and it is stocking these later part numbers in its range already. For Shaftec, it envisages particular growth in Electric Power Steering (EPS) within the next two years. It reassures AT readers that its recent heavy R&D investment is intended to meet future demand for EPS, which it predicts will be “dramatic” over the next two years.

A LOAD OF SCRAP?

Without ready supplies of undamaged core, the remanufacturing industry cannot survive. Therefore, considerable value is attached to the failed part that you remove from the car, so do not do anything to it that renders it fit only for the scrap bin. Arnott advises that, for air struts, this includes the primary components and all intact parts, such as harnesses, plugs, hoses, ball joints, and sensors. Apart from ancillary components being missing, Shaftec advises technicians to avoid poor housekeeping, which contributes to core damage. Over-aggressive use of inappropriate tools risks compromising the core’s integrity, increasing the likelihood of the remanufacturer rejecting the part and therefore, not refunding any surcharge.

Such examples of poor removal techniques include damaging threads on brake callipers, or striking them with a hammer and breaking/cracking the casting. Steering racks also suffer from irreparable pinion damage, if removed carelessly. For EPS systems, cutting the wiring looms to facilitate removal can destroy the unit, because replacement cabling can cost hundreds of pounds, which writes- off the economic viability of remanufacturing that component.

Carwood highlights common reasons for core rejection, including damaged fuel injector bodies and electrical components by technicians using “inappropriate methods” to extract them from the cylinder-head. For high-pressure diesel pumps, using incorrect high-pressure extraction tools to remove the unit from the engine is known to damage the housing and driveshaft. ECUs are especially delicate and the technician could damage them beyond repair by, for example, simply dropping it, or using inadequate packing, so the part becomes damaged in transit.