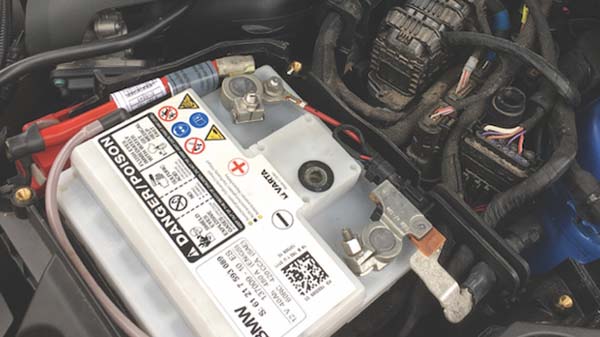 The changing role of the 12V battery

Many people new to electric vehicles are surprised to see an ordinary 12v battery under the bonnet. Pete Melville, founder of the Hybrid and Electric Vehicle Repair Alliance, HEVRA, explains the reasons behind its inclusion

The lead acid battery was the first rechargeable battery, invented in France back in the 1800s. It’s been refined over the years of course, much like that other 19th century antique, the internal combustion engine. The two are quite a good pairing, with the lead acid battery providing a large current for a short time for engine starting, and a nice float voltage for simple charging arrangements, unlike Nickel-based technologies.

However, the electric vehicle not only has different needs, but it also has its own enormous store of electrical energy in the form of the traction battery, so why complicate it with another one? Are manufacturers just being lazy and using systems designed for combustion engine cars?

The short answer is no, and there are lots of reasons for a low voltage system. The first is that the high voltage battery is only connected when necessary and needs to be disconnected in the event of a crash or certain types of repair work. It is still desirable to have electrical power in these circumstances – for control units, hazard warning lights, parking brakes – and all manner of other things. With the high voltage battery disconnected when parked, you’d have no central locking, interior light or even any way to reconnect it! The second

is that each high voltage cable has an interlock to monitor disconnection, earth shielding, and is monitored for electrical leakage. That becomes a huge task if everything in the car is powered by the high voltage system. The third reason is that automotive systems are designed for 12v, and literally everything, from bulbs to switchgear to ECUs, would have to be redesigned for high voltage. The fourth reason is that even in desktop computers that are powered by the mains, the voltage is always stepped down to either 12v, 5v or 3.3v, as that’s what the actual integrated circuits run on, so any higher supply voltage would mean the ECU would have to contain additional circuitry to reduce it anyway. The fifth reason is that you’d need to be high voltage qualified and follow high voltage procedures to do literally anything. I am sure there are plenty more reasons.

So, the low voltage system is here to stay, and for now it stays at 12v. Changes are on the way though – the Tesla Model 3 doesn’t have a single physical replaceable 12v fuse, which means we need to rethink some of the test procedures we’ve followed for decades. Is a lack of supply a fuse box fault, or

has it switched off for a legitimate reason and the fault is elsewhere? What about parasitic drains? Removing fuses has always been a handy way to isolate vehicle circuits, so we need new ways of doing this too.

Talking of parasitic drains, different electric vehicles use quite different methods to make sure the 12v battery remains ready for use. The use of body control modules and intelligent fuse boxes to manage demand, and the fitting of a current sensor on the battery terminal, have become the norm for all modern vehicles. However, the EV has some other tricks up its sleeve.

Because we don’t use an engine to charge the battery, but a DC-DC converter, we can engage it whenever we like. Many electric vehicles will check the resting voltage of the 12v battery periodically and can top it up as required. The EV battery can often be 100 times the capacity of the 12v battery, so when parked for long periods, periodic recharging means the car remains ready for use when the battery in a traditional car would have discharged.

Needless to say, the system is still not flawless. Some models, for example, will test the 12v battery once every 24 hours. If the battery discharges more quickly than this due to a large drain, it will be too late by the time the car next does the test. Other cars monitor the battery condition more frequently, or even continuously, but this can give us a different symptom – in the case of a battery drain, it will actually cause the high voltage battery to drain (as it will constantly be attempting to top up the 12v system). This is a lifesaver when your car is parked in town and when you return to find it still has sufficient 12v power to start and get home. But when you’ve parked your car at the airport for a fortnight and have a long drive home, you’d probably rather jump start it and still have enough charge to get home.

In reality, these problems are rare – with a combustion engine, a car needs to keep a large reserve of electrical power for engine starting and has no means of charging the battery when parked and can’t be left plugged in to top up as required. For this reason, carmakers have got pretty good at keeping parasitic drains low and switching off consumers if necessary. There are some exceptions, however.

Tesla have never made a car with a combustion engine. In fact, before 2008 they’d never made a car at all, which makes the Model S, launched in its home market in 2012, all the more impressive. With their second ever design, they’d managed to make a product superior to their rivals who have been making cars for a hundred years. The Model S, and more so the later Model X with electric falcon-wing doors, have huge electrical demands though. Their electric gadgets, powerful (but power hungry) processors, and lack of a start/stop switch of any kind means they draw large amounts of power when parked, which Tesla addressed by letting the battery top up whenever required. The downside of this strategy is that the car loses estimated driving miles at an alarming rate when parked, to the point that you’d be quite concerned to leave it parked up for a long period.

Kia and Hyundai are another great innovator when it comes to electric vehicles, with sophisticated thermal management and braking systems to improve efficiency, their cars also offer some of the highest miles on one charge (which seems to be the only stat some buyers are interested in). Like many other Asian manufacturers, reliability is generally good, but with some surprising engineering omissions. Let’s take a 2020 Kia e-Niro for example, a family-sized car. It’s an awesome machine, with 201bhp, in general driving they reckon it’ll do 282 miles on one charge, stretching to 382 if you drive mainly in town.

It’ll charge at up to 77kW, which means it can add 110 miles in a half-hour coffee stop, and thanks to its battery cooling system, this rate won’t drop off if you need to do lots of driving and charging in one day. And like other EVs, you can charge it from a 3-pin plug if you’re staying somewhere with no other options (albeit slowly). But here’s the thing – if you leave the door open, the interior light will drain the 12v battery and render the car unusable. My 1997 Rover 200 used to turn the interior light off to prevent the battery draining. How they could overlook something so basic, I don’t know.

Kia’s parent company Hyundai are the first manufacturer to do away with the 12v lead acid battery in the Ioniq Hybrid. It still has a low voltage system, with a 12.8v lithium-ion battery at its heart, mounted alongside the hybrid battery. All lithium- ion batteries have an internal safety cut-off circuit, which will disable the battery permanently if it drops below a certain voltage. Although this sounds quite alarming, the battery can be left for months or years before this happens, and with regular use it won’t happen. However, it’s possible to happen relatively quickly if the car has a parasitic drain on the battery.

Although the battery is replaceable as a spare part, it’s not The Hybrid and Electric Vehicle Repair Alliance is a network of garages who have the right tools and qualifications to work on EV and hybrid vehicles. Members receive unlimited technical support advice and drivers are able to use its garage finder to find qualified workshops in their area. www.hevra.org.uk