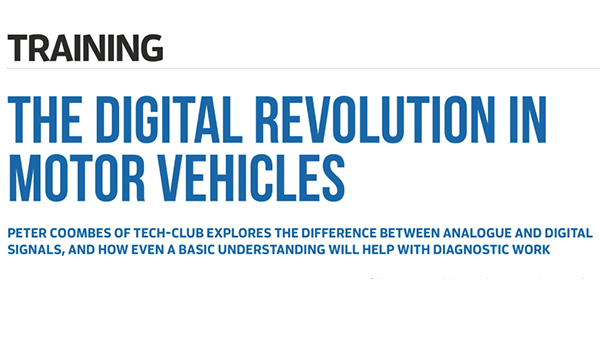 The Digital Revolution in Motor Vehicles – By Peter Coombes – Tech-Club

By autotech-nath on May 9, 2016
Article
Peter Coombes of Tech-Club explores the difference between analogue and digital signals, and how even a basic understanding will help with diagnostic work…

One problem with training or learning is deciding where to start. However, I am going to begin with Digital Signals, which may seem strange because digital signals and digital electronics are generally regarded as being advanced topics; but nearly every system on every vehicle now operates with digital signals and electronics, so even a basic understanding will be of value when working on modern vehicle systems.

If we then think of a watch with a digital display, the display might in fact only change once every minute; so this display is providing an occasional sample of the time at one-minute intervals; and although for general use this occasional sample is more than sufficient, the display only corresponds to the actual time once every minute. Now think what would happen if we had a digital speedometer that only refreshed the display at one-minute intervals; the chances are we would be making a lot of speed cameras flash, but if the speedometer then refreshed the display every second, it would be almost impossible to work out the speed.

If we then look at electrics and electronics, we will frequently encounter Analogue and Digital signals. Vehicle systems sensors, such as Temperature Sensors, Mass Air-Flow Sensors or Crankshaft Speed/Position Sensors pass information to the Engine Management Electronic Control Units (ECU or PCM); and some sensors provide analogue signals, whilst others provide digital signals. One of the most widely used sensors that nearly always provides an analogue signal is a temperature sensor, such as a coolant, air or oil temperature sensors; and there is a good reason for this (apart from simplicity and cost).

Most vehicle temperature sensors are in fact simple resistance based devices that provide analogue sensor signals, where the sensor resistance and therefore the signal voltage change with temperature (Figure1). A typical output voltage provided by a coolant temperature sensor might be close to 4 volts for a cold engine, and reduces down to maybe 0.4 volts for a hot engine; but the change in voltage is progressive and corresponds at all times with the engine coolant temperature. 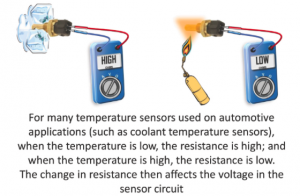 For an extreme example, imagine what would happen if the sensor only provided a signal to the electronic control unit that changed once very minute or every 5 minutes? The engine temperature would change progressively, but the fuelling and timing would only change occasionally. So, using an analogue signal provides the progressive change in temperature information that enables the control unit to progressively change the fuelling and ignition timing. It is then interesting to note that the change in temperature is obviously progressive, and other engine operating values such as air-flow also change progressively; and this means that many sensors will need to detect the progressive changes (which are not simply ON or OFF). Therefore, many sensors on vehicle systems do in fact produce an analogue signal; but these analogue signals need to be converted into digital signals (either within the control unit or by the sensor) so that the control units can process the information provided by the sensors.

One problem with using analogue sensor signals is that modern electronic control units and computers operate using digital electronic components (we’ll look at this in a subsequent article); but we can for now say that these components operate using signals that are in effect just ON or OFF pulses. If you think of the output voltage from a simple light switch (Figure 2): when the switch is ON, the output voltage is ON, and when the switch is OFF, the output voltage is OFF; and this is effectively a simple digital signal with ON and OFF pulses. In fact, one of the main components used for digital electronics is a transistor that is used as an ON and OFF switch; but there are then millions or billions of tiny transistors functioning as electronic switches that are contained within a micro-chip. So there can be millions of ON and OFF pulses passing through the micro-chips every second. 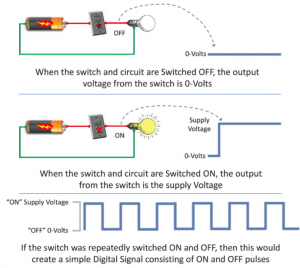 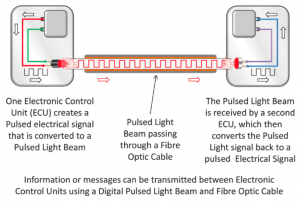 One relatively simple example of counting pulses is where some types of MAP sensors provide a digital signal to the control units. Although the sensor is measuring Intake Manifold Pressure that changes progressively, the sensor contains electronics that convert the progressively changing air pressure values into a digital signal. For one type of MAP sensor, when the ignition is ON but the engine is not running, the sensor will detect atmospheric pressure in the manifold. With this pressure, the MAP sensor signal will typically contain 150 ON and OFF pulses for every second, which is 150 Hertz; and this equals 15 ON and OFF pulses in one-tenth of a second (as shown in Figure 4). But when the engine is at idle speed with a closed throttle, the intake manifold pressure is LOW (which we often refer to as high vacuum) and the number of pulses then reduce to approximately 80 pulses a second, which is 80 Hertz – this equals 8 ON and OFF pulses in one-tenth of a second. The control unit will therefore count the number of pulses that occur in a pre-determined time period, and this then indicates the manifold pressure. 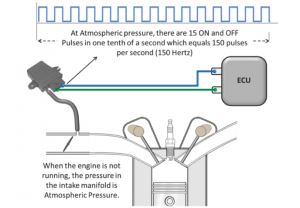 With one version of powertrain CAN-Bus signals, a message or individual signal typically contains 108 ON and OFF pulses, where the different possible arrangements of the ON and OFF pulses create a unique coded message. The clever bit is that the messages on a powertrain CAN-Bus network fly around the cables at a rate of around 500,000 pulses a second, which is referred to as 500 kilobits/second or 500 kbits/sec. This is in fact slow because on some vehicle networks, such as the fibre optic based In-Car Entertainment networks, there can be as many as 150 million pulses every second or more. This is all done with millions of tiny little transistors that just switch ON and OFF very, very quickly.

As a final note for this brief topic, CAN-Bus systems actually create two identical signals for each message, except that one signal is a mirror image or upside down version of the other signal; and this is to help reduce the effects of interference on the signal, but that is another story that we can look at in another article.