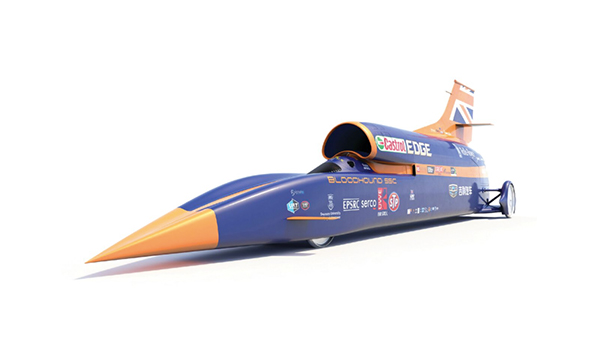 The fastest man on earth

RAF fighter pilot by day, and land speed record holder by night; Wing Commander Andy Green’s career would put every other speed addict on the planet to shame. Now he’s shaping up to try and top his own twenty-year record and break the 1,000mph barrier with the Bloodhound Project – and even though he’ll be the one in the cockpit come showtime, becoming the fastest man on earth is far more than a one-man job. Andy shares his thoughts on Somatic Graphic Illusion, G-Tollerance and the Bloodhound’s carbon footprint with Autotechnician…

HAVING FIRST CLAIMED THE LAND SPEED RECORD IN 1997 WITH THRUST SSC, WHAT ARE THE NEW CHALLENGES YOU HAVE FACED RECENTLY WORKING ON BLOODHOUND SSC?

First of all, for a land speed record car – it’s the fastest car on earth, it’s the oldest form of motorsport. We solved that problem 20 years ago, now to go so much faster brings another whole level of complexity, which, uniquely, we’re going to share live with tens of millions of people and that’s never been done before. In the same way that Felix Baumgartner had the world’s largest online audience watching him make the world’s highest skydive.

AND HOW DOES IT FEEL TO BE THE FACE OF SUCH A MAMMOTH AUTOMOTIVE ACHIEVEMENT?

It’s a privilege. I’m a mathematician by training, so I get to bring my skills as a mathematician to this fantastic, very highly-skilled, multi-disciplined science and engineering team, building the world’s most advanced straight-line racing car.

By employment I’m a Royal Air Force fighter pilot. I can bring that skillset to a project in terms of understanding jet engines and supersonics, the controls, precisions and dynamics of accelerating at 2G, and slowing down at 3G – that’s driving along the road at 60mph and coming to a complete stop in one second.

There’s the push/pull effect. Accelerating feet-first and then slowing down again where all the blood has spent nearly a minute trying to run towards my head away from feet, is now wanting to go the other way. This dramatically reduces your ‘G-tolerance’ so you need to psychologically counter it. I am a pilot, I practice it regularly in an aerobatic aeroplane so that isn’t really an issue for me. I occasionally take other people flying and I have had journalists come to write about the experience and not get the information they were after because they didn’t stay awake for the second half. So, they’re probably not cut out for driving this car.

TELL US ABOUT THE WIDER TEAM AT BLOODHOUND – WHERE DO YOU AND YOUR PARTNER, FELLOW FORMER LAND SPEED RECORD HOLDER RICHARD NOBLE, FIND THE ENGINEERS TO WORK WITH? 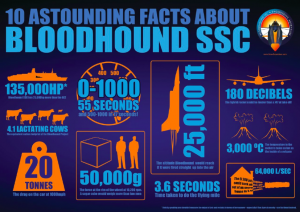 They have got the expertise, drive and the inspiration about doing something that no-one has even attempted before and solving problems that don’t yet have solutions. They are the sort of people that we sometimes need to go and look for, but most of the time they find us. Little did we know that it was going to take us five and a half years to solve the incredibly complex aerodynamic problems that would allow us to provide the right degree of stability, control and load distribution on the car. The world’s fastest jet fighters max out at about 900mph down at ground level in thick air. They can go twice as fast up in the thin air, but down at ground level we are aiming to build a car that is faster than any jet fighter. The task is that ambitious.

WHAT ARE SOME OF THE BIGGEST DESIGN CHALLENGES YOU HAVE FACED?

We find solutions in some of the most fascinating places. Southampton University is home to a national centre of expertise on boat performance and modelling. The wheels at high speed will not function like rubber tyres, they are solid aluminium discs rotating 10,000 times a minute. We’ve used their theory to predict how the wheels are going to function at very high speeds when the dry mud surface underneath the wheel starts to function more like a fluid than a solid. 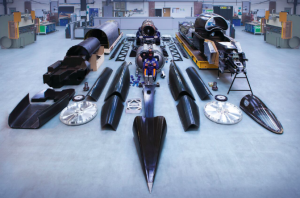 And then the cockpit is the strongest monocoque cockpit structure in the history of motorsport. How do you join that to the back-half of a car? That’s not the sort of thing Formula One can tell you, because our car weighs ten times as much. We’re talking about the sorts of loads that Volvo Ocean racers see when they try to join stainless steel fittings to carbon fibre hulls. So, that’s exactly the sort of people we talk to and the sort of technology that we’re using.

Running Bloodhound over a three-year campaign will generate 51 tonnes of carbon dioxide which is the same over a three-year period that 4.1 dairy cows will produce. It’s a flippant analogy, but it’s actually very small. The first time we fired our hybrid rocket we produced less carbon dioxide than 2,000 people charging up their mobile phones that evening.

IF YOU’RE SUCCESSFUL WITH BLOODHOUND, AND BREAK YOUR OWN RECORD, DO YOU THINK ANYONE WILL EVER GO FASTER?

I would be so sad if the sport just finishes with Bloodhound. It would be a great shame if another generation of kids didn’t have the excitement of watching astonishing feats and questioning them, doing speeds that they have hitherto just not been able to imagine.

But it’s been 20 years since the last one and it’s difficult to see where somebody would get the next idea to go that much faster, from. So, if this is – and I hope it isn’t – if it is the last record, then let’s make it a really good one.