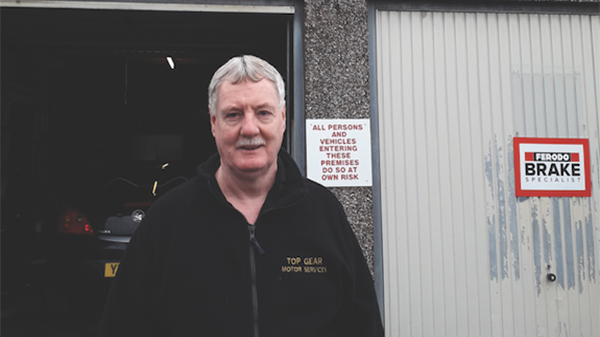 The independent garage with the professional touch

Over to you: Des Davies of Top Gear Motor Services, who celebrates 50 years in the trade this month, reflects on the dramatic changes during his time and what has helped him to stand out from the crowd.

I started my career as a 15-year-old apprentice on January 2nd 1970 at David Jones & Son, the local Ford main dealer in Ammanford. It was a huge garage, that employed 12 mechanics, 3 bodyshop sprayers, 3 apprentices, 2 parts department persons, service manager, foreman, 2 receptionists and 5 office staff.

I was assigned to work with the foreman and assist him in getting all the parts from the stores, prepare all the tools required for each job, fit new tyres, repair punctures, clean the floor, work benches and all the components before refitting to the vehicle, such as rocker covers and breather pipes. I also had to underseal all the new cars that were sold, which was a stinking job!

I had on the job training exclusively with the foreman for six months and learnt a lot from his advice and experiences. I was then given my own vehicles to service and repair and the foreman would check all the jobs after I completed them. At that point, they employed a new apprentice who now did my less enjoyable jobs.

I started going to Ammanford technical college one day a week to learn motor vehicle theory and practical tasks for a Level 2 City & Guild. I loved it; I couldn’t wait for my day off to go to the college. In those days, there was only a level 2 qualification that took 4 years to complete with written exams, not multichoice, followed by one year of practical work for a national craftsman certificate. You were then a fully qualified Indentured Motor Mechanic – where are these now?

A vehicle service was every 3,000 miles or three months back then and it took around four hours to complete a full service, taking half an hour just to grease all the lubrication points and nipples. We recycled components when I started working – relining brake shoes and clutches, repairing wheel and master cylinders with new rubber kits, repairing fuel pumps and water pumps with new seals and bearings, replacing brushes on starter motors – it wasn’t a throwaway society like it is today. Older mechanics actually repaired cars rather than just fitting new components, although it is reverting back to this as raw material gets more scarce.

Cars back then had very basic electrical systems; starting, charging, lighting, horn and wipers. What I was taught in electrical systems in those days you could put on a postage stamp. I believe this is one of the reasons many of my friends left this industry because when new technology emerged, such as electronics, they got frightened and moved on to higher paid jobs with less sleepless nights, less responsibilities and stress.

I realised I was not going to stay in one establishment for long after a BMC Mini (British Motor Corporation to you young ‘uns) came into the Ford workshop and nobody knew how to change the clutch on it, so it was sent to the local BMC franchise. I wanted to be a good general mechanic, not an expert on one brand who could not repair other makes and models. I decided not to stay more than 10 years in any job as I wanted to broaden my skills and knowledge.

I went to a SAAB dealership to complete my apprenticeship where I stayed for over 8 years. I did SAAB factory courses on the general technology, brakes, transmission and engines. In 1977, I came across an alternator, my first electronic component. A few years later I saw the first electronic ignition on a Ford Escort mk3, what was that all about? This frightened a lot of good mechanics and forced many to finish up, but I decided to retrain and learn about this new technology. I also completed the new Level 3 City & Guilds course on Diesel, batteries and charging and Engine Diagnostics, plus a City & guilds Heavy Vehicles course, to expand my knowledge.

At an early stage in my career, I became bored working for the dealers, which was mainly servicing and warranty work, as after the one-year warranty was out, we wouldn’t see many back in the workshop as they would go to the cheaper, independent garages. I have always been ambitious and wanting to work to my full potential so in 1987, I decided to open up my own garage ‘Top Gear Motor Services’, which had the top gear at the time, such as the latest Crypton tuner, Wheelforce 4 wheel aligner, Epco jacks, jacking beam and engine crane and Snap- on tools.

I continued to keep up with the technology; electronic ignition, engine management systems, exhaust emissions, fuel injection and ABS. I became a Crypton-approved technician after completing all their courses and then competed against the other Crypton top 10 technicians in Nuneaton and Bridgwater. It was here that I met a young rookie trainer. I could see that he had great potential and was very knowledgeable, intelligent, helpful and a real nice guy, of course it had to be James Dillon, the guru. What a man, and we have been friends ever since.

I went on to achieve my HNC and HND in Automotive Engineering at the Swansea Institute of higher education and was then asked to do some teaching at a local technical college. I wanted to give something back to the industry because I had a lot of pleasure from it and wanted to share my knowledge and experiences with the young apprentices starting up in this trade.

I loved tuning cars and finding faults. The more challenging jobs excited me. All the other mechanics would run away when they saw these complex, difficult jobs come into the workshop because they were time consuming and would kill the bonus scheme. And yes, some days I hate this job, when you get a car in that has done the rounds in various garages who have put loads of new shiny parts on the vehicle but still not fixed it, but then I get a sense of satisfaction when you fix the car others could not. This gives me a real buzz.

The one thing that I have learnt in my 50 years repairing vehicles and systems is no matter what tools and equipment that I have purchased, and most of them have been the best available at that time, the best tool you will ever have is the one between your ears!

I have had great mentors throughout my career, who have helped me to keep my feet firmly on the ground and I have also been lucky to have been taught by some very knowledgeable, trainers, lecturers and fellow mechanics.

My advice? Do as many courses as you can on a regular basis and keep on training as the technology is advancing at a very fast pace. I have always tried to do at least two training courses every year if possible. This helps you minimise mistakes and gives you confidence and the knowledge to repair and fix vehicles to the best of your ability. If you do not know how systems work and understand the basic principles of these complex components, how can you fix them?

And after 50 years, I am still learning new technology and systems every day and still love every minute of it. There is nothing wrong with making mistakes as long as we learn from them. I have been lucky enough to have a career that I eat, breath and sleep with. Would I change anything? Never! 50 years and not out.