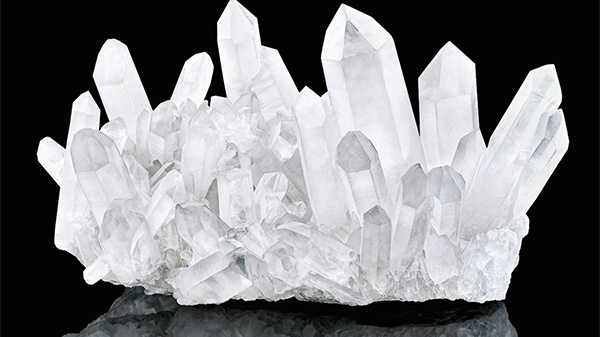 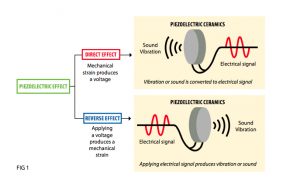 The idea for this article came from a conversation with a colleague about an unusual use of the piezoelectric transducer. I thought it would be a good idea to give a brief overview of the Piezo Electric effect and some of its applications within the automotive field.

So, let’s start with what the Piezo Electric effect is. It was discovered in the 18th century that certain types of mainly quartz crystals exhibited an effect whereby if they were compressed they gave off an electrical charge, and conversely, when an electrical charge was applied they would expand. For many years it remained a curiosity and it wasn’t until the First World War that its first real application came about, in the form of a robust speaker that could be used underwater as part of a Sonar system. Later applications include medical Ultra-sound, generating the spark in lighters and the speakers in those annoying greetings cards that play tunes.

Later research and development produced ceramic materials that were more efficient and increased the piezo effect. The first common automotive application was as a Knock Sensor. Using the principal that when compressed it produces electricity. The crystal, mounted in a housing, is bolted to the engine block and the vibrations from combustion produce electrical impulses that are monitored by the Engine Control Unit. It is effectively a microphone listening for noises. Obviously, detonation or Knock produces sounds above the usual engine noise and when excessive, the ECU controls the ignition timing to reduce possible damage.

Some Diesel common rail injectors use the opposite effect. Here, the piezo effect is used as an actuator to open the injector. By applying a voltage to the piezo element, it expands, opening a valve that controls the flow of fuel. The amount the ceramic piezo elements expand when a voltage is applied is in the region of 0.1%, so to get enough movement there are several piezo elements stacked on top of each other. Even so, the expansion of the Piezo stack is only about 45 Microns, or about the width of a human hair. The force generated by a piezo stack like this can be upwards of 10,000 Newton metres. The advantage of a Piezo actuator over an electromagnet actuator is that it is theoretically more robust and its reaction time quicker, enabling multiple injection events per cycle and more precise control over fuelling. 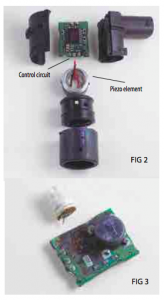 Probably the most common use in automotive applications, and one most of us have seen, is in parking sensor systems. Here, both effects are used and the crystal forms what is known as a transducer. The crystal is mounted in a housing along with some control circuitry. Figure 2 shows a dismantled parking sensor. You can see the housing, control circuit and Piezo element.

The piezo element takes the form of a ceramic disc bonded to the face of the aluminium housing. The system works on the same principal as Sonar or Radar. First, the Control unit sends an oscillating voltage to the crystal to generate a high frequency sound wave that is transmitted away from the car, this sound wave reflects off any objects in its path. As the sound wave returns to the sensor it vibrates the crystal and produces a voltage. The speed of this Ultra-sound pulse in air is 340m/s, so it takes approximately 3ms to travel 10cm. The time taken for the sound wave to leave the transducer and return is measured and from this, the Parking sensor control unit can calculate the distance to the object behind. As a little side note, this was a failed sensor and in Figure 3 you can clearly see where the electrolytic capacitor has leaked and caused corrosion on the circuit board.

What was the unusual use of the piezo effect that I was talking about at the start of the article? After some research, it turns out that the fuel additive tank on the Peugeot, Citroen, Ford and Volvo 1.6 diesel doesn’t use a conventional float type level sensor, there’s a piezo transducer in the base of the tank. It is controlled by the additive dosing module and is used in a similar way to a parking sensor to calculate the level of fluid in the tank. The high frequency sound wave is passed through the Eolys fluid. When the sound wave hits the top of the liquid, the change in density between the liquid and the air above causes some of the wave to be reflected to the transducer. By measuring the time taken for the reflected pulse to return, the additive dosing module can calculate the level of fluid within the tank.

Interestingly, by placing the transducer on the side of tank, the same method can be used to determine what type of fluid the tank contains. The speed of a sound wave passing through a fluid is affected by the fluid’s density. The sound pulse is passed through the fluid and is reflected by the wall on the opposite side of the tank and always travels a fixed distance. The system can be calibrated to know that for the correct fluid the sound wave should take a set time to return, anything different means the wrong fluid has been put in to the tank.

These aren’t the only uses of piezo technology in the automotive field, it is becoming increasing important in sensor technology. Further uses include MAP and Tyre Pressure sensors as well as the pressure sensors built into some glow plugs. The automotive industry is now one of the biggest users of piezo ceramics and, with the advent of self-driving cars, the requirement for robust sensors and actuators will only increase.