LATEST NEWS
You are at:Home»Article»The truth is out there

John often finds himself taking on jobs that others can’t fix, this month he reports on a Kuga which apparently just needs the keys coded…

The car in question was a 2010 Kuga, which found its way to us after a garage had undertaken some suspension repairs and thereafter, could not start the car. My wife initially took the call and was asked ‘how much to code the keys?’ The customer rang again the next day asking me to perform the work at the garage – I began to smell a rat. I explained that I would rather not do the job at the premises after hours as I’d need internet access and battery support. I was then told that a new battery had already been fitted but the vehicle had not started for over a month.
I explained how to initialise the keys, as this model Kuga will go into an energy-saving mode if it does not receive a signal from the key remote – manually unlocking the door usually re-initialises the keys. After further discussion and questions of how much it would cost, the customer had the car delivered to my workshop. The recovery driver laughed and said it was the fifth garage he had taken the car to and no doubt he would be taking it away yet again.
The vehicle was dead and nothing worked. I forgot to mention that the front panel and headlamps were missing and, oh dear, the suspension work was the result of an accident. We started by checking the battery, it only had 2.39 volts! Another battery was fitted to continue testing. We checked the output of the keys, only to find one had a missing battery. Not bad, considering this was supposed to be a simple key programming job!
With the key in the car and the ignition switched on via the power button, the immobiliser light started to blink. On a Ford, if the ignition is left on for one minute, the light will start to blink a fault code – in this case ‘1.6’, which relates to a data transfer code. We plugged in the IDS and attempted to communicate with the vehicle. No communication was  possible as the IDS requires the chassis number from the PCM to determine the vehicle. Yes, there are other ways to
enable IDS to communicate, e.g. entering the tear tag from the PCM, but at this stage we decided to stop and liaise with the customer – after all, it was only supposed to be a key programming job!
THE PLOT THICKENS
After speaking to the customer, it transpired the vehicle had been involved in a major accident. The suspension had been damaged and the vehicle had not started since. A new battery
had been fitted and had consequently gone flat. So now we were faced with a non-starting vehicle with a parasitic battery drain. We were informed that the wiring had been thoroughly checked as part of the repairs already undertaken and a new power steering module had also been fitted. We agreed a time limit with the customer to carry out further investigations. 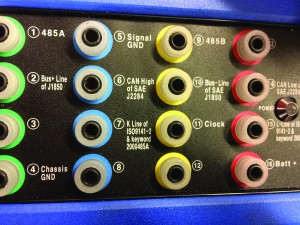 A battery support unit was hooked up to the vehicle to maintain voltage throughout testing and we first turned our attention to the non-communication of the powertrain control module. We fitted the Pico CAN test box to the diagnostic socket and performed a resistance check across the CAN high and low – pins 6 and 14. This was found to be open circuit – we were looking for a resistance of 60 ohms. In addition, we checked the voltage at pins 6 and 14 only to find a constant 5 volts. We inspected the wiring in the area of the crash damage  and this revealed three broken wires, 2 CAN high, 1 CAN low and a partially cut power supply cable. 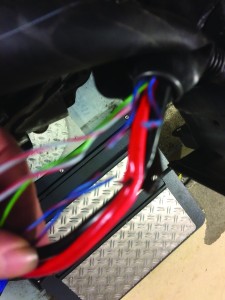 On this vehicle, the CAN high has two wires that go into
the power steering module – both were cut clean through
and one showed signs of shorting to the positive cable. We
then carried out a repair to the loom, staggering the repairs
as necessary. We rechecked the resistance at the diagnostic socket via the CAN test box and now we had 60 ohms as expected. Unfortunately, we still had 5 volts in both high and low CAN and a no crank/no start immobilised vehicle, so the next course of action was to disconnect control units that were connected to the powertrain bus.
When we disconnected the ABS module, we lost the 5-volt feed into the CAN system, the
vehicle then started to communicate. We checked with the customer to obtain authorisation to
fit a new ABS module. A new module was installed and programmed, a new battery fitted to the second remote and the vehicle started. Strangely, no key programming was
required! 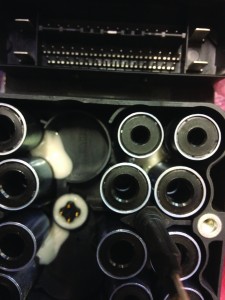 When we checked for a parasitic amp draw, we
found a 0.009 amp draw, which was well within specifications. Unfortunately, the accident damage to the wiring had put 12 volts into the CAN line and damaged the ABS module, this was causing the battery drain.
The vehicle had a hefty bill. You cannot quote on a job like this, as people would like, but keeping the customer informed is the best way to proceed. I have heard it said about myself – “He will fix your car, but he will charge you”. If we go about diagnostics in the right way, isn’t it right we should get paid for our time?
If you would like to share a Workshop Fix with Autotechnician readers, email Nicola@autotechnician.co.uk