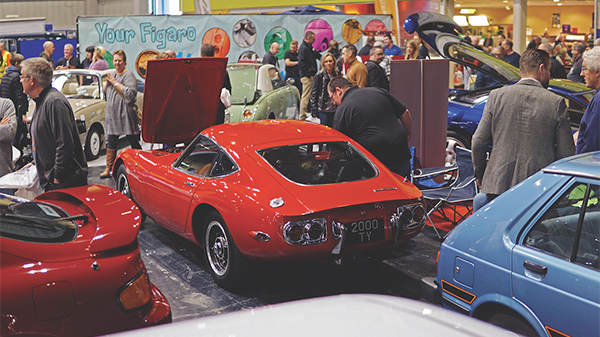 The world of classic cars is evolving

Determining what constitutes a ‘classic car’ has always been a subjective debate, with many factors involved. Some believe that age alone guarantees this status but there are other elements too, such as innovation at the time of its conception, how well it was regarded by journalists and fans, quantities produced, performance, desirability and advancement in design.

Then we have an even bigger debate of how old a car must be before it is worthy of ‘classic’ consideration. The UK government’s recent MOT ruling to exclude classic cars applies only to those produced before 1978. Yet, a car made in 1998 is now 20 years old – that’s hardly box fresh!

This is why we now have the term ‘modern classic,’ which seems to be used to cover cars from the 1980s and 1990s. If a car is, for the sake of argument, 25 years old, has long stopped series production, parts have become sparse and there are only 31 left on UK roads, that must surely be a modern classic. Except, what if I tell you that a Fiat Tempra fits that exact bill? Suddenly, the lines are blurred. Calling it a classic classifies it with cars such as Jaguar E-Types or Aston Martin DB5s. It just doesn’t feel right. A modern classic it is, then.

A visit to the recent Classic Motor Show in Birmingham only solidified my view that the world of classic cars is rapidly changing. Spread across eight halls of the NEC, to my surprise it wasn’t filled with Rover fanatics reminiscing about the days of Longbridge-past. They were still there, but so was the most wonderful and varied array of cars I’ve ever witnessed in one venue. 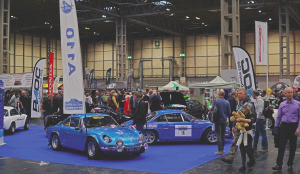 There was a varied mix of car manufacturers, such as BMW and Porsche displaying the latest heritage editions at the higher end of the price scale, to car or brand-specific clubs showing off their most lauded collector’s items alongside parts and tool suppliers. I could have spent days perusing the delights of the show. Nowhere else on earth will you find a super-rare and collectable 1960s Toyota 2000GT – which sell for between £500,000 and £1 million – right next to the Nissan Figaro owners club. One an undisputed classic, the other a Micra in retro drag that has now become a non-ironic classic itself. 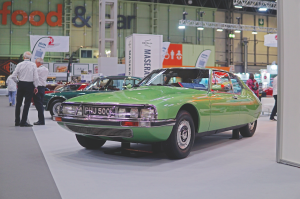 Once I’d stopped running from one stand to another to see the only Saab-Lancia 600 in the UK, or drool over a perfectly maintained Citroën SM, I started to notice several trends. One of which is age. I went to listen to a panel called ‘The Future of Classic Motoring Clubs’. The hosts discussed the biggest challenges facing the cult of classic car clubs and all of them said age was a big concern. They’ve all migrated their groups onto social media to discuss recent adventures or maintenance tips, but getting younger members into Citroen 2CVs or Jowett Javelins seems to be a big hurdle. Yet, at the same time, this show was heaving and there were plenty of younger people and families with children in attendance.

While the clubs related to 1950s-60s vehicles are struggling to attract new members, there is a whole new breed of modern classic clubs which are at least keeping the notion of communal maintenance alive. I grew up in the 1980s and 1990s. I played Gran Turismo, read CAR magazine and watched Top Gear. There were homologation rules, where car manufacturers had to produce a certain number of road- going vehicles if they wanted to go racing or rallying. This led to limited-run cars that featured flared arches to cover wider tracks and crazy rear wings, all with the aim of enhancing performance in competition. My generation is now splashing the cash on the cars they grew up with 20 to 30 years ago.

Cars from these decades are rare, valuable and more importantly, cool. There’s something about a regular hatchback or saloon on steroids that really appeals. At the show, I witnessed a Ford Escort Cosworth sell at auction for £34,500 plus fees, and the condition was a little shabby with aubergine paint. But that rear wing and motorsport pedigree are hard to ignore. 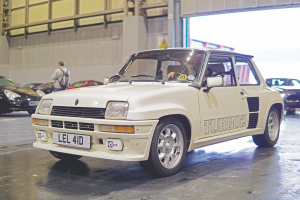 Then I met Kent. He took me for a ride in his 1980s Renault 5 Turbo 2. Built so Renault could go rallying in the ferocious Group B era, it is a left-hand-drive hatchback, with a mid- mounted 1.3-litre turbocharged engine where the rear seats should be and rear-wheel-drive. It also made the
most addictive cracks and pops, tended to switch ends at a moment’s notice and a heightened sense of speed. All the while, you are set on a typically French beige armchair. It was beguiling, and Kent enjoys sharing the experience at every available opportunity. 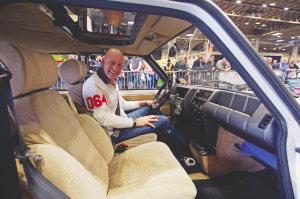 This leads me on to the community. When you buy an older rarer car, you aren’t just buying the vehicle, you’re buying into a way of life. You need to speak to people to ask advice, find a workshop that is set-up with the right knowledge and scours internet forums for spare parts. At the show, I bumped into Jim Magill. Jim has owned, and still owns, several small Fiats. As an ex-owner of a Fiat Panda 100HP myself, which I deeply regret selling, it was great to converse about a shared passion. He was at the event displaying his Fiat Cinquecento. Nothing sporty or collectable, just plain white and a push-rod engine producing an underwhelming 38bhp.

“I had one originally twenty-five years ago, before that my parents always had tiny Fiats and Renaults. The parts supply is not too bad at the minute, because the engine was used in the base model Seicento for quite a few years after this was made.

“I bought this one a month ago from the head of the Fiat Motor Club GB. At one point in its life it was posted on Facebook with a warning that it needed to be collected within two hours otherwise it was going to get crushed. I’m happy that it was saved.” 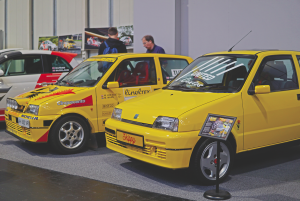 As forgotten cars like the Cinquecento become harder to find and maintain, it got me thinking. I feel that the 1990s were the last era where cars weren’t so homogenous – with less part sharing and common platforms, when more car companies were independent and safety regulations were less strict.

There are plenty of brand-specific workshops around, there seems to be a Porsche specialist on every street corner, but what about Alfasuds, Fiat Coupes or Ford Racing Pumas? Perhaps there is scope for specialised workshops focusing on the rarer modern classic vehicles that seem to be resurgent in popularity.

As for the term ‘classic car’, it cannot be defined by one person, coming down to personal preference. If the Classic Motor Show is anything to go by, the death of classic car ownership is far from near. It’s just evolving into a far bigger and broader affair. As they say in automotive circles, long live the MG Maestro! Maybe.

Cambridge & Counties Bank, who offer finance for classic car purchases, are now the official ‘Finance Partner’ to the Federation of Historic Vehicle Clubs (FBHVC). The new partnership will address the skills shortage within the growing heritage engineering sector, currently worth £5.5 billion to the UK economy.

The Heritage Skills Academy brings together experts from across the restoration industry, committed to teaching the skills required to preserve and restore pre and post-war engineering heritage. Students that complete the full term leave with a nationally recognised Advanced Diploma in Heritage Engineering with an option to specialise for a further year. The main focus is on students aged between 16 and 18 years of age and the Academy is supported by the Government Trailblazer scheme.

The partnership will see Cambridge & Counties bank, which launched its specialist classic car division in the spring, support the FBHVC’s Heritage Engineering apprenticeship scheme, held at the Heritage Skills Academy at Bicester Heritage. Cambridge & Counties Bank will provide a £10,000 bursary to help with travel and accommodation.

Cambridge & Counties Bank will also deliver business modules within the curriculum to ensure the apprentices are also equipped with the skills and knowledge they need to run a business and manage finances.

Mike Kirsopp, CEO of Cambridge & Counties Bank explains; “It is vitally important that we nurture and support skills for the future. Apprentices entering the world of heritage engineering will likely be working within small businesses or a business of their own and so equipping them with the understanding of finance, cash flow, accounting and asset management will be critical to their future success. We have the expertise and passion here at Cambridge & Counties Bank to support these students and play our part in preserving the future for historic vehicles.”