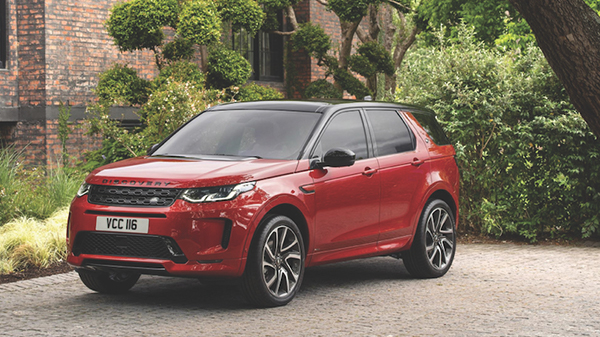 Nominated by Iain Robertson as his favourite model from JLR’s stable, the stalwart Disco Sport has been comprehensively revised for a new era, which is an essential exercise for a ‘go- anywhere’ car that has become a vital pillar in JLR’s overall line-up. With optimised proportions that project a more striking visual appeal, featuring another set of new signature LED lamps at the front and rear, alongside an updated front grille and bumpers, the top-selling Discovery Sport (over 100,000 have found largely satisfied homes in the past three years) should help Land Rover to draw-up its socks with confidence.

Having posted its worst annual losses ever (£2.5bn, May 2019), every future move by the company must be carefully measured. To do so, the new Disco Sport variant features a raft of technological changes that start with the drivetrain. 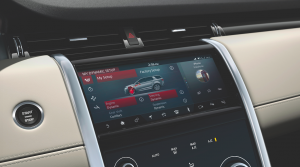 Personal preferences can be dialled into chassis settings.

Despite looking broadly similar, the new body, which is based on the company’s new ‘Premium Transverse Architecture’ (PTA), is 13% stiffer but 8% lighter than its predecessor and, together with rigidly mounted subframes that reduce noise, vibration and harshness into the cabin, it has been designed with electrification in mind, starting with a new 48-volt mild hybrid (MHEV) powertrain on Discovery Sport. As introduced on the current Range Rover Evoque, the system uses an engine- mounted, belt-integrated starter generator to harvest energy lost normally during deceleration and to store it in the under- floor battery. Although the system is always ‘on’, at speeds below 11mph, the engine shuts off, when the driver applies the brakes, before redeploying the stored energy to assist the engine under acceleration resulting in a minor power boost and a discernible (up to 6%) reduction in fuel consumption. 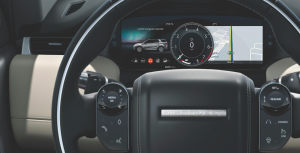 Land Rover informs us that an all-new, three-cylinder (1.5-litre, 110bhp) variant of the 2.0-litre, four-cylinder Ingenium petrol engine will power a plug-in hybrid model by the end of 2019 but the details are being kept close to JLR’s corporate chest at present. Although ‘low-cal’ versions of its existing transverse engine line-up remain as the primary motive force, a new entry-level turbo-diesel model (D150) that drives the front wheels only through a six-speed manual gearbox develops 147bhp, emits 140g/km CO2 and attains up to 47.8mpg (official combined WLTP figure). It is of non-hybrid type. However, in an attempt to maximise efficiency on both D180 and D240 turbo-diesel and P200 and P250 petrol-turbo engines, the All-Wheel Drive (AWD) variants benefit from Driveline Disconnect, which is a power transfer unit at the front axle that disconnects drive to the rear wheels, using an electro- magnetic clutch, under steady state cruising, thereby reducing frictional losses but with the capacity to re-engage AWD in less than 500 milliseconds, when required.

Available across the range of four-cylinder engines, the mild hybrid delivers emissions from as low as 144g/km CO2 and fuel economy up to 40.9mpg (WLTP). Customers are being assured that the latest diesel engines available on the Disco Sport are both cleaner and more efficient than ever (six months ahead of RDE2 standards being introduced in early-2020). At the other end of the scale, the 249bhp alternative in AWD petrol-automatic (9-speed) form delivers 269lbs ft of torque and can blast from 0-60mph in a brisk 7.1s. JLR has pledged to introduce an electrified version of every model it launches from 2020, as a lack of them is said to have affected its business negatively in recent years.

Land Rover has been addressing the reported unreliability of its electronic packages; a situation that has arisen from using different suppliers, with the individual hardware not relating with the core architecture. In pursuit of perceived high quality, the digital Touch Pro infotainment system, which has featured as a major revision on recent Jaguar and Range Rover models, is said to be linked more competently. The system recognises all of the latest smartphone and iPod syncing potential, to provide instant connectivity.

The company has been extolling the application of ‘wearable technology’, with the extra-cost option of Land Rover’s Activity Key. With the actual key-fob secured within the car, once the final door has been closed, you waggle the ‘Fitbit’-like wrist- strap at the Land Rover logo on the hatchback door and the familiar lamps-flash and accompanying locking sound notifies you that the car is safe and secure. It is equally easy to unlock it.

Designed to meet the digital demands of a typical modern family, as well as an array of connectivity and electronic driver aids, the latest Discovery Sport is also available with a ‘smart rear-view mirror’ that transforms into a video screen, at the flick of a switch, to display what is behind the vehicle in crisp high definition. Should the boot be loaded fully to the roofline, the rear-view is managed by a hatch-mounted exterior camera connected directly to the rear-view mirror in the same perspective.

New seats have been fitted across each of the three rows to provide improved comfort and versatility, aided by the second row’s 40:20:40 split-fold and slide functionality. Improved small item stowage across all rows, using pockets and trim slots, enhances the levels of practicality.

Terrain Response 2, the company’s electronically managed 4×4 system, is now available on the new Discovery Sport. Not only does it allow drivers to choose from four dial-in surface modes (comfort, sand, grass-gravel-snow, mud and ruts), in order to optimise performance and traction levels, the new ‘Auto’ mode enables the most appropriate setting for prevailing conditions and adjusts the engine’s torque delivery automatically to suit the terrain. When paired with Adaptive Dynamics, which is Land Rover-speak for a semi-active damper control system, an additional ‘Dynamic’ setting also delivers a sportier driving experience.

In fact, the latest Discovery Sport comes with a number of additional all-terrain technologies that have been pioneered by Land Rover, with Hill Descent Control and All-Terrain Progress Control available as standard on all-wheel drive models. Optional ClearSight Ground View, a realisation of Land Rover’s transparent bonnet concept seen originally in 2014, provides a virtual 180-degree view using tiny cameras beneath the front of the vehicle, which is useful when tackling uneven terrain, or even assisting with tight city centre parking spaces, further aiding its versatility. The top models also feature Active Driveline, which is an electronic torque vectoring system that balances the engine output across both front and rear axles when cornering, to improve both grip levels and steering responses.

The Sport has been refined to cope with challenging off- road terrain, thanks to a ground clearance of 212mm and excellent approach, departure and breakover angles of 25, 30 and 20 degrees respectively. The four-wheel drive versions can cope with gradients of up to 45 degrees. However, the Disco has always been a superior towing machine and, while the maximum towing capacity remains at 2,500kg, it has been improved with optional Advanced Tow Assist, which is pioneering and incorporates semi-autonomous driving technology (self-parking) to allow the driver to concentrate on steering the trailer, while letting the car guide itself. The driver would use the touchscreen for visual guidance and one of the lower rotary dials to ‘steer’ the trailer, as such it removes the need to counter-steer the vehicle while manoeuvring.

Summary: Available in Discovery Sport, S, SE and HSE trim, in addition to the R-Dynamic variants that feature sportier bumpers, and a 20% increase in fuel tank capacity (up to 67.0-litres), the various changes made to the Discovery Sport are said to resolve the ‘teething problems’ evident on the outgoing models. Prices start at £31,575, rising to £49,675 for the all-singing-and-dancing top diesel variant.

Hot on the news that JLR has posted its worst annual figures ever, the company truly needs Discovery Sport to score positively on every level. As a right-sized, practical and well-packaged SUV, this model can help with the essential turnaround that the company needs so desperately.