Does the unstoppable march of technology from the OEMs mean that the independent should sacrifice traditional values? Not so, argues Rob Marshall, who ventures to rural Herefordshire to find out how Autologic’s DrivePRO is benefitting an all-makes repairer at the centre of its community.

While all garages can regale visitors (and invited journalists) with anecdotes about going beyond the call of duty for their customers, many rural garages take this to extremes. Nestled in the quiet village of Kingsland, just outside the rural Herefordshire town of Leominster, Markhams Garage Ltd relishes the more unconventional requests as part of a normal day. 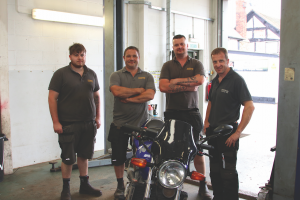 “Just like the post office, a good garage should be at the centre of village life”, states Bryan Markham, the 79 years-old proprietor, who joined the firm in 1966, after his father founded the business three decades previously. Consequently, the community relies on the garage’s brawn and brains to help with a wide range of problems that extends beyond their transport needs. While you might expect technicians to help with pleas to coax an unwilling engine into life on a cold morning, or help to wake a lawnmower from hibernation, calls beyond the usual call of duty, such as assisting with heavy furniture lifting, or even guiding randy bulls across the road safely into another field, is seen as typical country garage life. Two staff members are also on call firefighters that are part of the local fire station and respond to emergency calls, including road traffic accidents and at least one motorist owes his life to the Markhams Garage staff. Within this seemingly idyllic picture of country life, you would expect the premises to be chock-full of Morris Minor Travellers, Austin A30/35s and Series II Land Rovers but this is not the case, as technician, Simon Powney, admits: “In truth, while Land Rover is the most popular marque that we see, the other vehicles are so varied that Markhams Garage would not be able to meet our customers’ needs if we decided to specialise.” 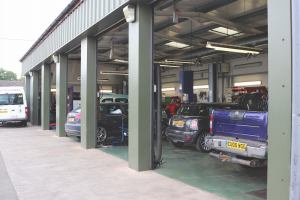 Markham’s six-ramp bay is at full capacity most of the time, meaning that time cannot be wasted unnecessarily.

BRINGING TRADITION INTO THE 21ST CENTURY

Should you imagine that a rural garage can last, by ignoring the challenges that are threatening the independent aftermarket, think again. If anything, rural life can make overcoming these trials even harder but Markhams’ survival has not been due solely to customer loyalty but rather its evolution. By the early 2000s, for example, it ceased its bus repair and taxi services, closed its bodywork repair division and expanded its mechanical repair facilities, with a bespoke six-bay workshop. At the same time, its two-bay MOT building was equipped with one of the first ATLs installed in the UK, which is due to be replaced again shortly. Another double bay incorporates a heavy-duty ramp for commercial vehicle repairs.

“We cannot afford to be complacent with technician training either,” Simon explains, “and we send our technicians regularly on courses to keep abreast as far as we can with new technologies; the most recent of which was visiting Schaeffler’s training centre in Hereford for its double-clutch transmission course, so we now can offer DSG repair services.”

Perhaps the greatest challenge to the aftermarket is keeping pace with the rate of change in vehicle diagnostics, something that Markhams Garage realised in the late 1990s, and decided to act upon, as one of its other technicians, Tavey Cameron- Swan, recalls. “Investing in the right diagnostic equipment has always been crucial and we started with a Sykes Pickavant Two Line, which was upgraded soon after to a Four Line system.”

Indeed, looking through their diagnostic equipment cabinet reveals several shelves, stacked with hardware from the last twenty years, including kit from Snap-On, Autel, VAG COM, Bosch and more. “We do not throw anything away,” admits Tavey proudly, “not because we are hoarders but the older equipment is so useful for occasional, quirky jobs. We had a 1996 BMW 5-Series here last week with an ABS fault and 1997 Jaguar XJ Sport (X300) with an illuminated airbag warning light, both issues were identified swiftly, thanks to this now obsolete equipment.”

The main workhorse on the diagnostic front is Autologic’s AssistPlus, which Simon Powney discovered after attending a demonstration with Frank Massey. “I was very impressed with the set-up,” he remembers, “but the equipment was incentivised heavily by Euro Car Parts, where ECP paid the subscription fee and made a contribution to the cost of the hardware; for us, it was a no-brainer.”

Despite this, Simon admits that the AssistPlus’s advantages were not realised for an entire year, until Markhams’ technicians started to experience newer vehicles with more complex emissions-related problems. From then, AssistPlus became the garage’s diagnostic tool of choice but, after three years of near- constant use, Simon realised that it was time to upgrade.

While Simon is proud of the business’s record of keeping-up with training, he came across red faced, when admitting that, until this year, the garage staff had not attended a trade show in almost a decade. Like many businesses, taking all employees for a daytrip to Automechanika Birmingham necessitates closing the garage doors. Yet, Simon thought that it would be worthwhile to visit during the final show day, especially as he wanted to make the right choice about upgrading AssistPlus. He recollects, “While I had spoken with Autologic about its latest DrivePRO, I wanted a live demonstration to see if it really was a viable upgrade to the already excellent AssistPlus.”

Sure enough, the Markhams team was impressed with what they saw in Birmingham on the Autologic stand and were about to leave, when Simon was asked to put his business card in a goldfish bowl for a competition. “Normally, I am uninterested in such things, viewing them more as a gimmick”, Simon explains, “so, imagine my surprise, when we were walking around the show near to closing time, as my mobile phone rang… we had won the star prize, which was a DrivePRO tablet, plus paid subscription for a year. We were over the moon.”

Once back in Herefordshire, the team could not wait to try out their £9,000 prize. Since then, the AssistPlus has been semi-retired to the diagnostic cabinet and Tavey admits that, “Already, DrivePRO has proven to be worth its weight in gold. It is hard enough for urban garages to find technicians, let alone good technicians; but it is harder for country garages like us, which are not specialists. This tool addresses both issues; not only do we have access to a master technician but also specialist experience. The week after winning the tool, for example, we had a rough-running Audi A3, displaying a spurious fault code; effectively, the diesel pump software had corrupted – this was the first time I had come across the problem, yet Autologic’s tech told me he had seen it 30 times that month. After it was reprogrammed, the fault disappeared.

Another technician, Darren Poole, agrees that the tool’s Remote Assistance Programme (RAP) has helped save him time, from simple to more complex tasks: “I replaced a Volvo V60’s battery and had issues resetting the charge monitoring system; DrivePRO enabled me to contact the Autologic customer support, which took control of the tool and reset the system for me, which freed me to continue with other work on the vehicle. RAP also saved me considerable time on a more complex problem on a Range Rover Sport, where the key fob had been water damaged. Autologic dealt with accessing the convoluted Land Rover TOPIx, sent through the data and reflashed the security system for me, while I fixed several other issues with the vehicle.” 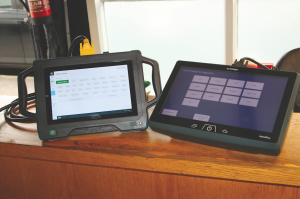 Compared to the AssistPlus (right), DrivePRO (left) is more comfortable to use in a workshop environment but Autologic is emphatic that the quality of the behind-the-scenes support is DrivePRO’s real strength.

Tavey also reports that it has saved the garage the embarrassment of admitting failure and sending a customer away to a main dealer, especially as DrivePRO boasts enhanced capabilities for Asian vehicles. A typical example was a KIA Venga TPMS in-wheel transmitter that DrivePRO reprogrammed remotely, allowing Markhams to return the car to its satisfied owner, who was all too keen to settle her invoice. Yet, diagnosing the problem in the first place can be made easier, too. After all, capturing live data might be simple enough but it is meaningless without any context. Thankfully, via DrivePRO, live data findings can be referenced against expected recordings.

Perhaps unsurprisingly, Markhams Garage is very pleased with the performance of its free star prize. “The call-back service could be quicker sometimes but that is my only gripe,” admits Tavey. Yet, is DrivePRO good enough for Markhams Garage to pay the £2,500 annual subscription fee next year? “It is a lot of money for a one-off fee, whether you use the services, or not, especially for a country garage” states Simon, “but DrivePRO’s customer service back-up is terrific. We can access more vehicles, perform more tasks and, when we get stuck, obtain expert knowledge; the RAP remote assistance is particularly invaluable.” We shall take that as a resounding ‘Yes!’ 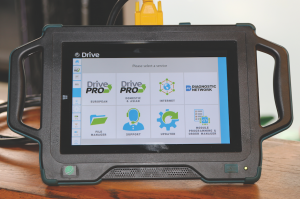 Since winning the hardware and a year’s subscription to Autologic’s DrivePRO, it has become Markham’s everyday diagnostic
tool; although the RAP remote assistance facility has proven especially useful.

When acquired by Opus Group AB in 2017, Autologic Diagnostics joined forces with Drew Technologies. DrivePRO is the first creation from this meeting of technological minds.

This has resulted in the marriage of Autologic’s diagnostic software with Drew Technologies’ principal hardware and CarDAQ-Plus 3 vehicle communication interface technology. The DrivePRO tablet comprises a Windows 10 touchscreen with integral moulded handles, longer battery life, a more logical menu, as well as remote diagnostic support. You can also liaise directly to an OEM-Trained Master Technician at any point. Usefully, programming procedures for BMW and JLR models can be carried-out directly, so you do not have to negotiate a manufacturer server pass- through. Autologic can also provide customers with a unique Remote Assist Programming service for Volvo, Peugeot and Citroën brands. J2534 Programming can be a complex task but Autologic has the solution with DriveRAP, which adds another layer to its support service offering. The program allows Autologic to control a customer’s device directly, when extra help is requested, and carry out programming tasks.

Autologic states that DrivePRO should be considered as more than the device alone; it is a portal through which technicians can access its skills, knowledge and expertise. Through its team of OEM Trained, brand- specific Master Technicians, Autologic told AT that it provides a unique diagnostic support offering to its customers globally, something that no other diagnostic tool provider in the industry is able to offer.

The company realises that, while it is recognised by much of the motor trade as the manufacturer of the ‘Blue Box’ that was discontinued in 2015, it is not phasing out support for its older products. It reassures its non-DrivePRO owning readers that it will not be looking to make their products obsolete and will continue to provide software updates for all products for as long as possible.