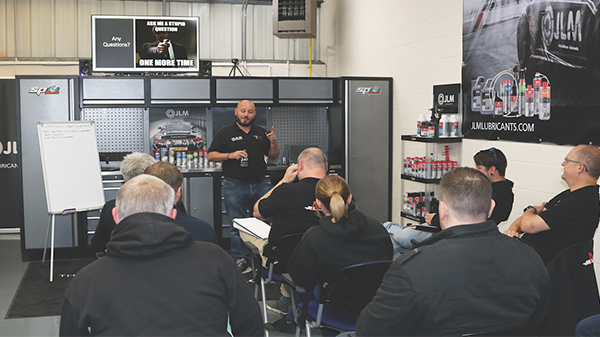 The partnership between JLM Lubricants of the Netherlands and the DPF Doctor in Northumberland has given birth to the JLM Academy. Rob Marshall gives and overview of the main technical tips from the inaugural training course.

While we should all be a little suspicious of celebrity endorsement, certain techs within the aftermarket have earned their fame, by imparting their expertise to raise standards within the trade. A rising star is Darren Darling. You may have seen his presentation at Automechanika Birmingham earlier this year and, if you have not, it is possible that you have become conscious of his DPF expertise, including his recent elevation to Dutch JLM Lubricants’ brand ambassador. So, has this cheerful Geordie (albeit born in Scotland) sold out?

“Not at all”, he argues, and explains,

“I was aware that the modification trade was unsustainable, so my own business had to evolve into another speciality. As many garages tended to have no idea about repairing the growing DPF blockages, I experimented with a number of products and techniques. Since I found that nothing could touch JLM’s products, this kick-started a working relationship with the manufacturer.”

Darren confirms that his ambassadorial role is also unpaid and, while he receives an annual fee from the vetted garages that have joined the DPF Doctor network, he emphasises that members have no obligation to use JLM products. He explains, “Even so, we prefer that JLM products are used, because we know how and why they work. However, using an inappropriate DPF cleaning product for the presented fault, can not only be harmful but also dangerous, which is why basic training had become necessary for both technicians and suppliers.

The British market is being seen globally as a pioneer in DPF repairs, which was made clear by the JLM Academy’s first training course being supported by not only UK technicians but also the Australian JLM wholesaler, who had flown-in specially for the event and joined Kalimex, the UK distributor. Held on the 10th and 11th September, the two days-long event cost £600 per delegate and it was especially reassuring that JLM Lubricants BV’s Founder and MD, Gilbert Groot, with Ruud Post (Sales Manager) flew over specifically from the Netherlands.

Importantly, the course is not a JLM hard-sell lecture but it presents a logical process that technicians can follow, when confronted with a DPF-blockage. Darren underscores that workshops must price accordingly to allow for the time necessary to assess the vehicle properly. This is not to ‘rip-off’ the customer but to factor that DPF blocking is a symptom of another issue that must also be rectified. Garages that quote and carry-out a rushed half-hour DPF clean immediately are likely to see the car again very shortly, as Darren proved, by a severely split turbo boost pipe on the V50 blocking its brand- new OEM DPF after only 12 miles of open-road driving. 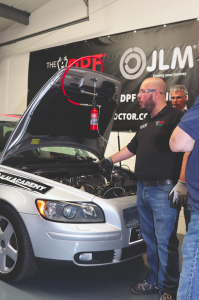 JLM’s latest intake cleaner was demonstrated. This is another two-step process that is gentle on the engine. Mr
Darling explains that the chemicals soften the oily/carbon mix in the intake that is dislodged during driving

As an engine and its associated components are stressed severely under high exhaust back pressure conditions, detail was provided about why the engine should be run for as little time as possible and under the lightest possible load. A high RPM ‘thrash’, therefore, is likely to be harmful. Basic checks were also detailed, explaining how garages can structure the task and giving solutions to the customer that solve the symptom (unblocking the DPF), effect a cure (diagnosing and resolving the underlying fault) and offer an aftercare service (included as an oil flush/change/filter replacement and additive advice). This is not to overcharge the motorist but it allows the workshop not to operate at a loss, while offering the customer optimum value and minimising the risk of complaints.

It was also explained when DPF issues tend to be caused by another component, how ash deposits are seldom the reason for blockages and why fault codes should not be reset until a degree of further investigation and live data readings are considered and verified, before being trusted.

As iron-cerium based chemicals are available freely for motorists to add to the fuel tank themselves, to assist with raising DPF temperatures to facilitate regeneration, quizzing the customer about whether or not any such products have been added beforehand must be part of the initial information- gathering exercise. DIY overdosing is common and garages could make things worse easily, by adding even more iron- cerium product. The result can be either a melted DPF core, or a serious fire, due to DPF thermal runaway that the ECU cannot control.

Technicians were taught how to use their judgements, when selecting the most appropriate chemical. Iron-cerium based additives, such as JLM’s DPF Regen Plus, are still useful, if used in the correct concentrations and conditions, to reduce soot build-up in the case of low mileage/urban driving conditions. A combined DPF and injector cleaner (such as JLM’s Catalytic Exhaust Cleaner) can be used as an aftersales product, as preventative maintenance, too, but also acts as an injector cleaner and cetane booster. Yet, more expensive alternative products (such as JLM’s DPF Particulate Filter Cleaner) contain platinum-cerium catalysts that cleanse the filter without causing temperature spikes and should be employed when a filter is moderately blocked with soot.

For severe blockages, where the cleaning solution has to be injected directly into the DPF via the pressure differential sensors’ flexible pipes, the V50 was used to demonstrate the two stage process of JLM’s DPF Clean & Flush. The session included critical advice to prevent the solution from being forced through the EGR circuit, on severely-blocked filters, and into the intake, which risks hydraulicking the engine.

The course provided a fascinating introduction for garages to tackle DPF work confidently, while maximising profitability, customer satisfaction and value. It also succeeded by providing JLM wholesalers with sufficient technical knowledge to support garages that may not have access to the detailed level of advice that is available to the DPF Doctor network.