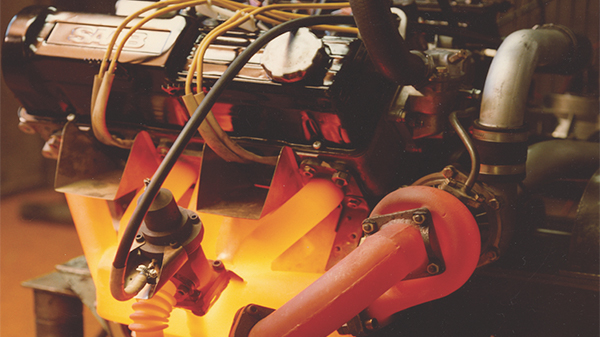 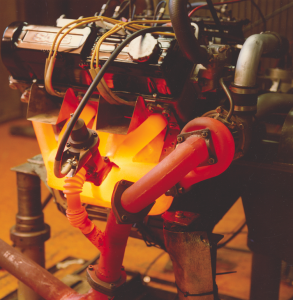 Turbochargers advanced the practice of supercharging, which was patented by Gottlieb Daimler in 1885. They started to appear on affordable passenger cars during the 1970s. This picture, from an early test SAAB 99 engine in the late 1970s, demonstrates the extreme temperatures to which the turbocharger is exposed.

As turbochargers have made modern high output, low displacement engines feasible, they have become almost universal; Rob Marshall gives an overview of what shortens their working lives.

Despite being subjected to extremes of heat and pressure, turbochargers themselves are surprisingly reliable components. In most cases, failure is caused by something else and this is one reason why BTN Turbos is one such company that advises you view the turbocharger as an integral part of the engine, instead of a standalone component.

A lack of engine power can be instigated by a host of different issues, from a clogged air filter and collapsed intake hoses to seized variable vane mechanisms/turbocharger shafts, or damaged turbine and compressor wheels, caused by objects being sucked into the turbocharger. The exhaust system must also be free of leaks and blockages, the fuel injection system must be working correctly and the engine must be free of significant mechanical wear, or faults. 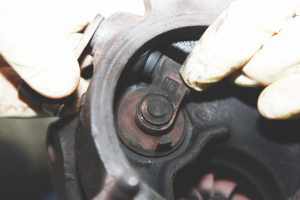 A worn wastegate operating arm and bush can cause a ‘chatter’ to be heard, which is a known trait that afflicts some BMW N54 engines, for example.

Excessive noise of air escaping can also be caused by components other than the turbocharger itself, including a leak anywhere within the intake system, from damaged intake pipework/gaskets, or a punctured intercooler, for example. Worn turbocharger bearings can start howling and, if ignored, the rotating shaft can develop play that damages the oil seals and risks the turbine and compressor wheels striking the internal casing.

Exhaust smoke colour needs to be identified, before reaching a diagnosis. Black smoke that indicates an over-rich fuel mixture/excessive particulates can result from improper/ inadequate servicing, through to a restriction in the intake system, or further system leaks that reduce boost pressure. Poorly-executed aftermarket dump-valves can also result in an over-rich mixture. Obviously, assess the simplest option first. For example, blue smoke from burnt engine lubricant can be caused by a failed PCV valve, or failed turbocharger oil seals, so checking for excessive crankcase pressure and inspecting the PCV system for blockages is a logical first step, before quoting to replace the turbocharger.

Oil leaks can also be the result of air pressure escaping unintentionally from the exhaust and intake because the oil seals within the turbocharger’s Centre Housing Rotating Assembly (CHRA) require positive air pressure within both the compressor and turbine housings to keep the lubricant in situ. Low air pressure/vacuum will cause lubricant to be drawn past the seals. In reality, the pressurised intake side of the system will contain some oil mist but excessive amounts can also point to worn turbocharger bearings, which damage the seals. Unsympathetic driving techniques (mainly frequent hot shutdowns), or an issue with the lubrication circuit, tend to be the main cause of failures within the CHRA and not an inherent turbocharger defect. In extreme situations, worn seals can cause ‘runaway’ on certain diesels, where the engine runs uncontrollably on its own lubricating oil, often to destruction.

Should you be struggling with preliminary diagnostics before suspecting the turbo, follow BTN Turbo’s helpful fault finder www.btnturbo.com/faultFinder, which provides a logical series of step-by-step checks.

Should the turbocharger suffer from failure, query why it has happened. As the lubrication system tends to be at fault, most turbocharger suppliers will not honour any warranty, unless
it can be proved that extra work has been carried-out. This depends on the application. Nissens, for example, recommends strongly that the turbo oil feed pre-filter is removed on the ubiquitous PSA 1.4/1.6 HDI (DV4/DV6) diesel range, due to its tendency to cause oil flow restrictions. We hope to look at turbocharger replacement steps on this engine in a future issue. 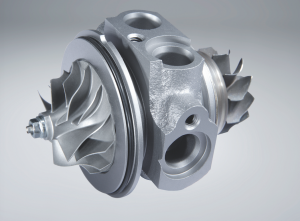 Back pressure from a severely blocked DPF can stall the turbocharger shaft, putting so much strain on it that the
end nut can unwind. Pictured is the turbocharger’s centre housing rotating assembly (CHRA) from a BMW 6-cylinder twin turbo application.

Not helped by extended oil drain intervals, stop-start technology and smaller sump capacities forcing oil to work hotter for longer, contamination that results from anti-pollution systems, from DPFs to EGRs, risks reducing the lubricant’s effectiveness even further. Sludging and carbon contamination is occurring on certain models that are being serviced in accordance with their official (albeit ambitious) maintenance intervals, so it is little wonder that most modern engines are so intolerant of skipped oil changes, let alone poor quality filtration and incorrect specification engine lubricants being used. BTN Turbo recommends that engine oil is replaced more often as the vehicle gets older, to help reduce carbon build-up in the lubrication system.

While Melett, renowned manufacturers of precision turbochargers and components, based in South Yorkshire, concurs that oil contamination and lack of lubrication are
two of the most common causes of turbocharger failure, it highlights that the current generation of direct injection petrol engines (GDI) are introducing their own issues. Compared to diesel, downsized GDIs operate at even higher temperatures and, because the turbocharger size tends to be related to that of the engine, their shafts run at higher speeds, which can make failures more likely to be catastrophic.

Yet, Melett warns that technicians should not be fooled into making a misdiagnosis on these newer engines. A diagnostic scan might reveal a turbocharger related fault code but this could originate from a failed temperature sensor on the same circuit, for example. Consider the simplest cause, prior to condemning the turbocharger. 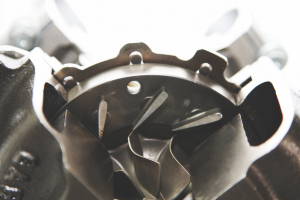 Pictured is a cutaway turbo, which shows the variable geometry vanes. Their pivots can seize, putting strain on the actuator. This article discusses electrically-driven actuators, although part pneumatic versions are employed on some engines, such as the FIAT JTD family.

Avoid confusing turbocharger CHRA failure with a faulty variable vane/geometry mechanism, which also causes fault codes, noise and incorrect boost pressures. The mechanical vane pivots can seize due to carbon/sludge contamination and the resultant resistance draws a higher current draw, which damages the electronic vane actuator that is bolted to the intake side of the turbocharger.

According to ACtronics, the Hella REA (Rotary Electronic Activator) uses a CAN message to determine optimum lever position, whereas the SREA (Simple Rotary Electronic Activator) uses a square wave to pins 1 or 2. Both of them possess a 5-pin plug but the block orientation means that an REA actuator cannot accept an SREA wiring connector. Melett explains that technicians should check if REA/SREA is working correctly, should a loss of power be reported especially, and reports that the following are the most common failure situations:

When the variable geometry mechanism sticks, the higher current causes either the motor to burn out, or the plastic worm gears to fail.

The internal PCB’s wire connectors are known to expand and contract that may create an intermittent fault, dependent on turbocharger/engine bay temperatures. The diagnosis, therefore, might be undetected during repair and workshop testing, because the fault occurs only once the actuator warms.

Take care not to damage the actuator unit, mounted to the turbocharger, because the top case is made from brittle plastic, making it susceptible to cracking.

Apart from corrosion striking at the wiring, the electronic actuator can become rusty, resulting in the wrong signals being fed to the ECU. In advanced cases, the metal arm can break.

Constant vibration from the vehicle can cause a gradual deterioration of the entire unit.

We plan to provide more detailed information on REA/SREA diagnostics and repairs in a later issue. However, note that these actuators appear to be simple but their calibration settings especially are programmed in the software and are unique to each turbocharger. Even loosening the retaining bolts on the actuator will take it outside of its tolerance.

As there is no industry-standard definition of what constitutes a remanufactured turbocharger, you will need to trust a reputable firm that holds high quality standards. Melett explained to us that premature replacement turbocharger failure is related to the use of lower quality internal parts, which in turn can lead to an increase in warranty returns and loss of customer confidence. Yet, it classes a remanufactured turbo as being one that has been completely manufactured to the standard of an original new turbo. The company maintains that its remanufactured turbochargers bring cost savings, compared to buying a new component from a main dealer parts counter, but you do not sacrifice quality. Even so, it warns that a replacement turbocharger, being offered at a price that is too good to be true, probably is. Ask yourself, ‘What is in your turbo?” For more information, see www.melett.com/literature/melett-rematec.