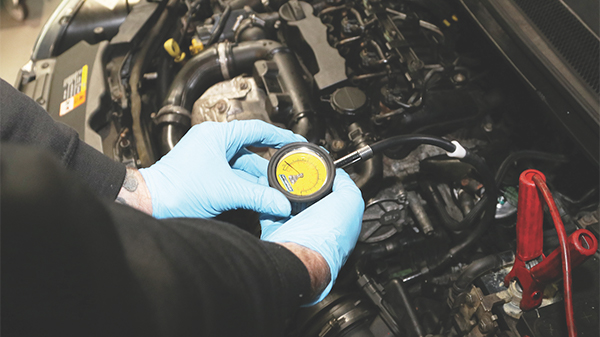 Despite being a relatively simple component, DPF problems open up a wealth of upselling options, but consider that blocked filters tend to be the symptom of a problem, not the cause, says Rob Marshall.

Should a DPF-equipped diesel engine experience neither constant higher speeds and loads, nor high enough temperatures for long enough, most problems tend to stem from something else. This is when cleaning the DPF alone can be an almost feckless exercise, because it will block again if the underlying issue is not resolved, increasing the chance of an irate customer returning the car to you, destroying the profit from that repair and damaging your credibility. Therefore, explaining to a customer from the outset that DPF problems can be the ‘tip of the iceberg’ will help to brief them.

Before problems are reported on a car that you see regularly, use your detective skills. If you know that the engine may be suffering from the effects of contamination, it may be worth upselling engine carbon cleaning services, such as those offered by Terraclean, or FlexFuel, at service time. This is because lacquered fuel injectors and carbonised EGR valves can expose the DPF to higher soot loadings. Yet, be aware that a DPF regeneration tends to be needed after such processes have been carried out, because deposits that are loosened from within the engine will travel into the filter to be combusted.

March’s issue of Autotechnician looked into fuel additives that you can upsell at service time. Yet, when you know that a DPF-equipped diesel is not exposed to conditions that promote regeneration, you might wish to recommend that a DPF cleaning fuel additive is used periodically. Darren Darling of the DPF Doctor will be covering this issue at Automechanika Birmingham and he warns that some members of the public are adding too much additive, in the mistaken belief that doing so is beneficial. He advises that:

“We are seeing huge damage being caused by DPF additive over-dosing, which causes the filter to overheat and even melt internally – the only cure for which is a new filter. Emphasise, therefore, that the dosing instructions are followed; more is definitely not better.” 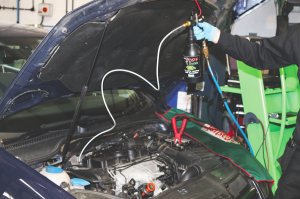 On-car cleaning services are good revenue opportunities – pictured is the three-step process offered by the DPF Doctor, where cleansing solutions that break-down carbon deposits are flushed into the DPF through the pressure differential sensor pipes.

BG Products told us that it feels that the metallic fuel borne catalysts give a temporary improvement but can have a long-term negative effect. Instead, it recommends its DPF cleaning system that cleans the intake, intake valves, injectors and piston rings, but the additive chemistry survives the combustion process to clean the DPF as well.

Consider the service history of the vehicle, too. On cars with auto-dosing fuel-borne additive systems (such as the Eolys system used mainly on PSA brands, Volvos and Fords), has the additive tank/pouch run empty, been disabled, filled with diesel, or an incompatible fluid? If so, the risk of DPF blockage will rise considerably, because the soot particles are not encapsulated by the additive, which promotes their combustion at lower temperatures. 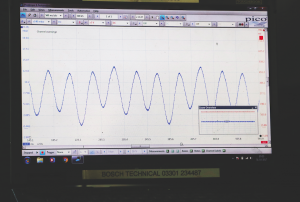 An overloaded DPF tends to be caused by another fault. Here, the unequal pressure waves, measured at the DPF using a PicoScope, highlights a running problem. A slight ‘chuffing’ at one fuel injector, caused by a leaking seal, is likely to be a culprit, because it would reduce compression slightly, adding to the DPF soot load.

DPFs block not only with soot but also ash, which is incombustible. As it has to be removed via the DPF’s inlet, the filter must be taken off the car and sent to a specialist cleaning company, such as those that possess a Flash Cleaner machine, marketed by DPF Recovery of Norwich. TerraClean reports that it offers an enhanced DPF and ash cleaning service to its network aside from its DPF, EGR and engine carbon removal tools, which includes testing, cleaning and return of the filter within 72 hours.

Poor maintenance, such as not using low SAPS engine oil, will increase ash levels markedly. Eventually, the ash level within the DPF can even exceed that of soot. This leads to high regeneration frequencies, which fail to reduce the pressure difference sufficiently, which is calculated from readings taken from both ends of the DPF. Should you be looking at vehicles with mileages over 150,000, upselling an ash removal service is a wise idea, especially if the car’s diagnostics are indicating regular active regenerations.

Talk to your customer. After all, a lit dashboard DPF warning light may not be indicating a fault but could be an instruction for the car to be driven in ways that facilitate active regeneration. Should there really be a problem, you could be involved with a complex investigative process, because DPF blockage tends not to be the filter’s fault. Rather than jumping to the wrong conclusion, you may have to convince your customer that charges made for extra diagnostic workshop time are worth the investment. Naturally, you may discover a host of other issues that provide potential opportunities for your workshop; unless the customer decides that the car is not worth repairing…

Venturing beyond fault code reading, investigating diagnostically the frequency of active regenerations and the past driving conditions may lead you to discover that regenerations are not taking place because of a fault that can be as trivial as the service indicator not being reset, or even a faulty heated seat. Low fuel levels can prevent regeneration too, something that may be worth pointing out to the customer, should the gauge’s needle be buried in the red ‘reserve’ zone.

Looking into whether the DPF has a blockage, or if its pressure differential sensor is giving erroneous readings, should be part of your diagnostic procedure beyond simple fault code reading and basic live digital data analysis. Once the engine is running, you may be able to detect any abnormalities that may result either in a regeneration being aborted, not attempted at all, or conditions that can cause excessive soot loads, such as faulty EGR valve(s), injectors, or mechanical engine wear. 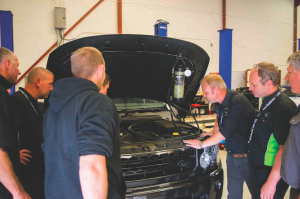 Training is available on DPFs, which some tool suppliers provide. Pictured is TerraClean training being undertaken by Randstad Limited; 2019’s dates are notified to its service centres by e-mail and via its Facebook page.

Once you are satisfied that the underlying faults have been resolved, cleaning the DPF can be undertaken by either driving the car, or by executing a more mechanically-stressful forced regeneration. A number of gentler methods involve injecting a cleaning fluid though the pressure differential sensor pipes in the engine bay, or by unbolting the pressure pipes from
the DPF and pouring the additive through the aperture(s). Naturally, once cleaning is complete, reassemble the car, delete any fault codes, take it for a drive and double-check the live data readings afterwards, to ensure that you feel confident in handing the car back to its owner.

Ash (and cerium) remain within the DPF and are removed only by taking the filter off the car and flushing the deposits out via the inlet. This is because they cannot pass through the filter and can be responsible for creating a high pressure differential and, therefore, a number of ineffective active regenerations might result. Upselling an ash/cerium removal service may be necessary, prior to refilling the Eolys additive tanks on vehicles thus equipped, because the cerium content survives the combustion process and becomes trapped within the filter. While you might trust in a mail order service, DPF Recovery of Norwich told us that its Flash Cleaner machine restores the DPF to 98% of its original as-new condition and can run the entire cleaning cycle (washing and drying) with one machine only, enabling the cleaning process to be faster, less expensive and more environmentally-friendly than alternatives. We hope to look into the off-car DPF cleaning process in more detail at a later date.