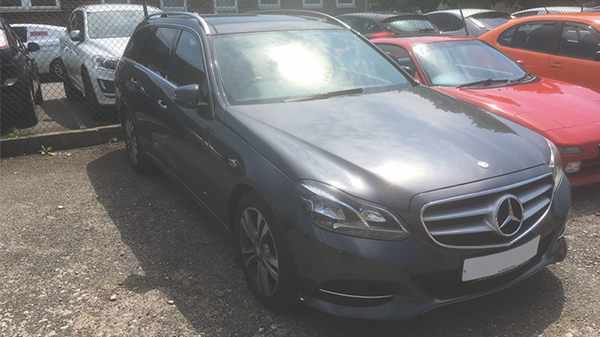 The system features a 12V starter motor and alternator, plus a two-way DC-DC converter. As well as charging the 12V battery, it can charge the hybrid battery from the 12V system if required. The high-voltage motor- generator is used for starting the engine when stationary, and the starter is used when in motion. The starter can also be used for starting if the high-voltage battery charge is low.

The E-Class uses the 651.924 engine, the 651 being an established engine used in other Mercedes cars and Vito/Sprinter vans. Measuring 2143cc, and developing 201bhp, the engine has fuel-saving features such as a volume-controlled oil pump and demand-controlled coolant pump. The engine has twin- turbochargers in series, cooled exhaust gas recirculation, balance shafts and has the timing gears and timing chain on the gearbox end. 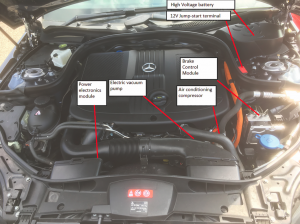 Some engines were originally supplied with Delphi Piezo injectors, which have no leak-off pipes. These may have been replaced with the later version, with leak-off pipes, due to reliability problems. Injectors have individual codes for fine- tuning and these must be entered with diagnostic equipment when replacing. Injector seals are prone to leak, to prevent this, the injector and bore must be completely clean and a new sealing washer and bolt used, and the bolt tightened to the correct torque. If there is any resistance to putting the injector in the bore, the bore is not sufficiently clean and may lead to future leaks.

It has two turbochargers in series, the first designed to provide boost at low engine speeds and the second for high engine speeds. The exhaust manifold features a boost pressure control flap (Mercedes calls it ‘LRK’) which is like a throttle flap. When closed, the exhaust gas is sent to the first turbo, when open, the gas bypasses the first turbo and goes straight to the second. On the intake side, the air goes through the second turbo first and then can either go into the intake or through the first turbo, depending on the position of the charge air bypass flap.

As with most modern diesel engines there is also a throttle flap on the engine intake. This creates a partial vacuum in the inlet manifold to help draw in recirculated exhaust gas. The flap is also closed when switching off the engine to avoid the vibration caused by a diesel engine’s compression. The exhaust gas is cooled by the engine coolant and features a cooler bypass flap for when hot EGR is required (such as during a DPF regeneration).

The engine has four valves per cylinder – eight inlet ports. One of the ports for each cylinder is covered by a swirl flap. The flaps can be closed during part-load acceleration to improve air-fuel mixing (imagine putting your finger over the end of a hosepipe – the faster flow helps mixing). At full load, more air is required, so the flaps are opened by an electric motor.

The exhaust system is fitted with an oxidation catalyst and a particulate filter. The particulate filter catches soot produced by the engine and burns it into smaller particles during regeneration. The filter needs to reach temperatures of around 600°C to burn off the soot. This is done by hot exhaust gas recirculation, operating the glow plugs, and later injection. The late injection results in a higher exhaust gas temperature. The motor generator is also used to increase the load on the engine, which further increases exhaust gas temperature. If driving conditions permit (e.g. motorway driving), a regeneration is possible without using these extra measures. The car will normally do a regeneration whilst driving about every 500-600 miles. DPF problems should be rectified as soon as possible as further driving may cause the filter to block and need a new filter. A differential pressure sensor and back-pressure sensor are both fitted.

The engine’s water pump can be switched on and off by a vacuum-operated clutch. Depending on coolant and air temperature, the pump can be de-activated for up to eight minutes after engine start to save energy. The thermostat is also electronically controlled. A normal thermostat with an increased opening temperature is used, with an electric heating element. The engine ECU can use the heating element to open the thermostat earlier if desired. The engine cooling system and high voltage cooling system share the same coolant and expansion tank, but a valve closes at around 60°C to prevent the engine’s hot coolant from heating the high-voltage system.

The gearbox is a 7-speed 724.208 and has a 12V electric oil pump to operate the transmission when the vehicle is driving with the engine off. The motor-generator, or ‘electric machine’, is installed in the transmission bellhousing and is connected to the engine via a wet clutch. For starting, the gearbox can be put into neutral, and the motor-generator used to turn the engine. For electric driving, the wet clutch is disengaged and the motor- generator drives the vehicle via the gearbox. If it is necessary to start the engine during driving, the arrangement does not allow for this, so the engine is turned via a 12V starter motor and, once started, the wet clutch can be engaged for the engine to drive the wheels.

An 12V electric vacuum pump located on the engine next to the air conditioning compressor is used to provide vacuum to the brake booster when the engine is not running.

The Power Electronics Module is located on the lower left of the engine and incorporates the inverter and the DC-DC converter, it is liquid cooled. The DC-DC converter is bidirectional, so can charge the high-voltage battery from the 12V system if required.

The 12V alternator is used as and when required. Under normal circumstances, 12V power is provided by the DC-DC converter. If further power is needed, or a fault develops, the engine control module switches on the alternator over a LIN network. 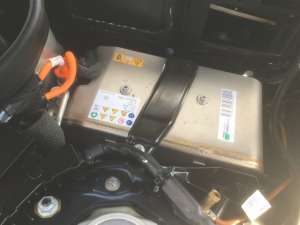 If the driving conditions and battery charge permits, the engine will be switched off. Before switching off, the system checks the electric transmission oil pump is working. Start-Stop is disabled if the bonnet is open or if the engine is not at operating temperature.

The engine is shut off whenever it is not needed at speeds up to 100mph so, even if the cruising speed is high but only a small amount of power is needed to maintain cruising speed, the engine will be switched off and the motor-generator will provide the power needed.

The 23kg Lithium-Ion battery is just 0.8kWh, but this is not a plug-in vehicle, so the battery’s only function is to store energy for use later on. The battery is on the nearside corner of the engine bay and is cooled by the air conditioning system. The battery ECU and system main relays are inside the unit. An interlock circuit travels from the high voltage battery to check the presence of its high-voltage connector, and that of the Power Electronics Module, Motor-generator and the air conditioning compressor.