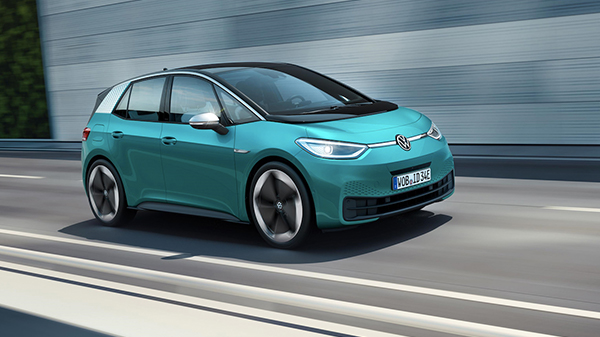 As the biggest car company in the world, Volkswagen has a notional responsibility to lead the new car market, in the opinion of Iain Robertson, although he is concerned that its paper-folded design stance, while light and airy, is lacking slightly in design direction and even the technology is not innovative. If everything goes awry in the fossil-fuelled car parc, at least VW should be ‘production ready’.

As a VW Golf-size hatchback, the all-new I.D.3 makes moderate use of its 4.2m length and substantial 2.8m wheelbase in accommodation terms. Of course, the floor of VW’s MEB platform is home to a choice of three lithium ion, increasingly potent battery packs, which could compromise accommodation, were it not for a taller body. Its driving position is okay, if not quite as comfortable as a Golf, although the trim detailing, more noticeable due to its minimalist dashboard swathe, does fall short of tactility and quality expectations.

With much of its 1.65-tonnes kerbweight mass located between the front and rear axle lines, the I.D.3’s modest turning-circle (10.2m), urban manoeuvrability and main road stability is good. However, its low-speed ride quality is fidgety on the style-conscious, large diameter (20.0-inch) alloy wheels but no less than on a Tesla Model 3. The exterior design is handsome, if a little ‘Origami’ in its approach, while an aerodynamically steep windscreen is necessary almost as much for its ability to reflect the extensive HUD information, as cleaving through the air.

The latest VW is a three-model line-up, with a trio of power options and a posted starter price of around Euros30,000 (c.£30k-£40k range in the UK). Personally, I believe that this rate is too expensive, the ‘People’s Car’ no longer appealing to a lower common denominator. The entry-level version provides a 45kWh battery and a fully charged WLTP range (probable mileage in brackets) of 200 miles (170). A 58kWh alternative will do 250miles (210), while the 77kWh version is capable of 350 miles (300). Fast charging of the latter version will enable a range of around 150 miles, within 30 minutes, from a 100kW charger (suitable cables are supplied with the car).

Despite assurances to the contrary, range anxiety will continue to overwhelm drivers, when they are confronted by high-cost superchargers, out-of-service chargers and those that are semi- permanently occupied, thereby adding to journey delay issues.

Yet, used as a commuting machine, fully recharged nocturnally using a domestic driveway wall-box (electricity cost around £14, from flat to full), the I.D.3 has a role to fulfil that is well within its capabilities.

The paper-folder’s art provides a clean sheet cabin approach that aids the aura of space. An intriguing innovation is the thin interior LED light bar that provides driver assistance in conjunction with the in-built sat-nav, flashing when the blind spot monitors are working and even warning of a need to avoid incidents, when in cruise mode.

If anything, knowing that the dedicated platform and electric drivetrain, protected by an 8 years/100,000 miles warranty, will be reliable, it is the new electronics architecture that could pose future problems. With the balance swinging towards VW, the company will not wish to court controversy. However, even LEDs possess a finite life and replacing blocks of them, which will be the most economic route to resolving failures, will also add to ownership costs. Avoiding high-cost public chargers may alleviate this somewhat.

Interestingly, using the mid-range 58kWh unit as a benchmark (the only version available at pre-launch) but also comparing it with other EVs, a restricted top speed of 100mph is a clear intention by VW to extend the car’s range. Its acceleration is likely to be disappointing, with a 0-60mph time in the region of 10.0s. There is a perfectly good reason for it, as Volkswagen has opted for fewer lightweight materials being used in its manufacturing, stating without irony that the extensive use of aluminium would make I.D.3 far too expensive.

In some respects this is a reflection of the ‘ordinariness’ that VW wants to instil within its EV models but a hefty kerbweight does equate to higher ‘fuel’ consumption and less wieldiness, although the I.D.3 does not seem to suffer from handling idiosyncrasies, which suggests that the chassis electronics are being worked much harder. Equipped with Brake Energy Recovery, the two-stage drive (BER on/off ) means that most owners will hardly use the brakes, which will lead to longer term possible calliper seizures and rotors rusting, long before brake pads need to be renewed.

Yet, there is no skimping on the equipment front, the 1st Edition models, for which early adopters have paid a £1,000 deposit since May 2019 (deliveries commence this July), include sat-nav, DAB+ radio, both seat and steering wheel heating, front armrests and 18.0-inch diameter alloy wheels as standard equipment. The 1st Plus variant adds a rear-view camera, cruise control, ambient cabin illumination, all-LED external lighting (complete with ‘fluttering’ headlamps signature) and 19.0-inch alloys, while the 1st Max features the augmented reality HUD (projected onto the inside of the windscreen), a Beats sound system, panoramic sunroof and the aforementioned 20.0-inch alloys. The higher up the trim ladder, the more involved is the electronic packaging.

The constancy of electric drive changes the way by which power can be delivered to the wheels, which means that a normal multi-gear transmission, needed to cope with conventional, variable torque curves, can be replaced by a single-speed unit. Extremely compact, it uses a reduced number of internal cogs and a pair of smaller transmission gears to maintain compact dimensions. Designed sturdily and produced entirely in house at VW’s Kassel plant, the unit takes fullest advantage of the electric motor’s instant torque (228lbs ft) and makes a multi-gear transmission weighty and redundant.

Reverse only demands a change in polarity, the electric drive working in the opposite direction. To achieve 150kW of power demands that the electric motor rotates at high speeds, the I.D.3’s top speed being reached at a maximum of 16,000rpm. In reality, it needs no more than the solitary ratio. The one-speed gearbox minimises extraneous noise, although beyond the statutory up-to-19mph ‘approach noise’, electric drive units do emit a characteristic whine.

International governmental eco-pressures are pushing carmakers into producing BEVs. VW has planned its I.D. model roll-out for several years and, while production volumes are understandably low at present, the German Zwickau plant, which is run on clean energy as part of VW’s decarbonisation plan, intended to make the company carbon-neutral by 2050, is ramping up the numbers.