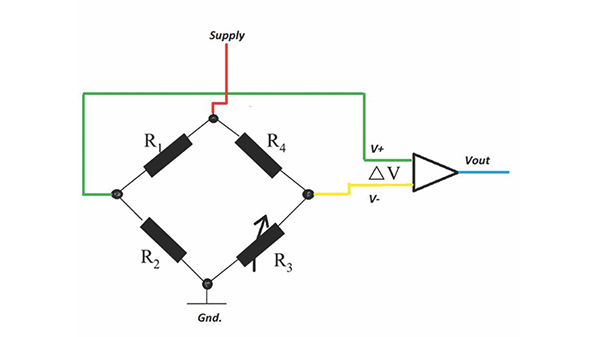 Damien describes how a relatively simple fault became slightly more complicated to rectify when a component with different operating parameters was fitted. He provides a guide on how to resolve the issue quickly and effectively by further investigation and testing, using a TRITON-D8 and a Multimeter from Snap-on

A 2010 Volkswagen Polo with a 1.6 litre common rail diesel injection engine (engine code CAYC) was reported to have both an engine management light and glow plug warning light illuminated. A diagnostic scan tool was connected to the vehicle’s data link connector and the following error code was stored in the Electronic Control Module:

This fault code can be caused by a number of factors:

A volt meter was connected to the signal wire of the sensor and a voltage of 4.9 Volts was measured.

The simplified diagram in Figure 1 shows the circuit layout. The signal wire (pin 3) has a voltage of 5 volts applied to the sensor signal circuit from the engine control module. The sensor is a piezo-resistive measuring cell with integrated evaluation electronics.

Increased soot loading will cause an increase in exhaust gas pressure upstream of the filter. This is referred to as closed loop monitoring. As can be seen from the fault code, a number of electrical tests must be conducted to pinpoint the actual fault. After the initial voltage test at the sensor signal wire (4.9 volts), the next test was to validate the ground circuit. The ground for the differential pressure sensor is shared with the turbocharger boost pressure sensor and the transmission neutral position sensor, so a fault here was highly unlikely as there were no other fault codes stored in the Engine ECM, however the circuit was tested and proved to be in good condition. The wiring was also tested for a short circuit between the supply and signal wires and no fault was found here either. This proved the fault was within the DPF pressure sensor.

The diagram in Figure 2 illustrates a simplified sensor layout, with a piezo-resistive bridge circuit connected to
an operational amplifier. The bridge is two series circuits connected in parallel. Normally, three resistors within the bridge circuit will have the same resistance value with one resistor having a variable resistance. With zero pressure applied to the circuit, all resistance values are equal, so the output from the operational amplifier is zero (V+ = V-). When a pressure change occurs in the sensor, the bridge will become unbalanced and a voltage will be output (Vout) to the sensor evaluation circuit.

A new sensor was sourced and fitted, a volt meter connected to the signal wire displayed 0.5 volts with the key on, engine off. With the engine idling, the voltage remained at 0.5 Volts and on a road tested increased to 0.9 Volts under wide open throttle, a new fault was now present in the engine management system:

This code would initially clear but returned once the ignition key was cycled (key on, engine off ). This was an indication the engine control module detected an error with the signal voltage under this condition. Any mechanical faults could be ruled out as the engine did not need to be running for the fault code to return. A basic setting for the DPF sensor was carried out using a diagnostic scan tool, however this procedure failed.

The next step in the diagnostic process was to manipulate the signal output voltage using a potentiometer. The voltage was altered in steps of 100 millivolts and the trouble code erased at each increment. The trouble code returned each time until a voltage of 1 volt was reached. The code would not return when the ignition was cycled. This indicated the expected key on, engine off voltage from the sensor.

Further investigation into the part supplied was carried out and the issue was found with the supplier of the part. Although the part was ordered from the vehicle identification number, there was a different part number supplied. This can be normal procedure as parts can often be superseded. It was later found that the part supplied for vehicles fitted with a Siemens engine control module, was part number 281 006 005. The sensor originally fitted to the vehicle was 281 006 083 and these sensors are fitted to engines with a Continential engine control module.

With the incorrect sensor fitted, the engine control module interpreted the signal voltage as a pressure of – 15 kPa, hence the implausibility fault code. Figure 4 outlines the difference in voltage output between both pressure sensors.

The fault code was cleared, and the vehicle performed as expected with the correct DPF pressure sensor fitted.

Snap-on offers a wide-range of customer support, including free comprehensive online training to enable you to get the most out of your Snap-on diagnostic tool – you can register here: diagnostics.snapon.co.uk/online-training