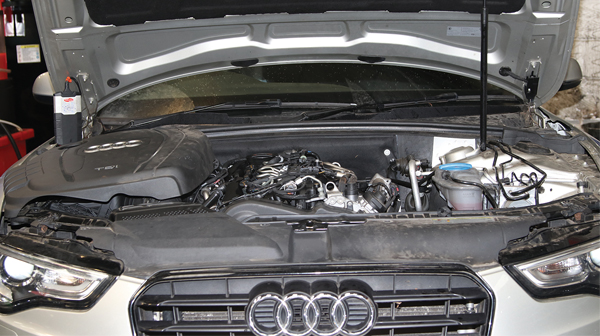 Garages sharing tips is one way of strengthening the independent aftermarket even further, therefore Autotechnician visits Cross Motor Engineering in Warwickshire to discover how a common but potentially expensive problem was solved, by replacing a £1.00 O-ring

The digital world might have made information more accessible, but misinformation is also rife. Despite what many keyboard warriors might think, ‘Doctor Google’ is not a dependable source of motor vehicle fault finding, therefore the professional repairer must turn detective. This commences with interviewing the customer, prior to even opening the bonnet. As AT’s regular contributor, James Dillion, emphasises, gathering your own data and making a charge for diagnostic time is certainly preferable to ‘firing the parts cannon’ blindly.

Cross Motor Engineers alerted us to a problem that the company has encountered several times, which it wishes to share to the benefit of other garages. The car in question was a 2012 2.0-litre Audi A5, fitted with Volkswagen Group’s venerable ‘diesel-gate-spec’ 2.0-litre Euro V engine. When quizzed in more detail by the garage’s staff, the owner revealed that it had been either difficult to start, regardless of coolant temperature, or failed to run completely. The fuel consumption had increased; performance had dropped-off and the idle quality had become erratic. The driver was adamant that it had not been mis-fuelled, which is just as well, considering that the tank had just been brimmed. This last point is fairly important, when a potential fuelling issue is suspected, because some diesels can adopt different running characteristics, when the tank is close to empty.

2. Neither a MIL was lit, nor was any fault code present. After putting the battery on an external power support, the technician had to act detective, by accessing and interpreting live data. When viewing the fuel rail pressure, the indicated 9270kPa (or 92.7BAR) at engine idle is below the typical range of 25,000 to 30,000 kPa (250-300BAR). The fuel pressure control valve PWM signal (at 34.37%) was also higher than the expected 16-20%.

3. Clearly, the fuel system is at fault, but the inconsistent live data readings could be caused by either the low, or high pressure systems. Starting with the low pressure circuit, a pressure gauge was connected to the inlet for the high pressure pump (noting that this car does not have a low pressure switch) and the engine started. The resultant pressure of 4 BAR at idle was acceptable, as was fuel flow, which equated to around one litre every twenty seconds; again, this figure is within specification.

4. Again, knowledge of the system and the location of the various component parts, allied to how they fit together, gives you the best idea of whereabouts in the circuit you can access to gather pressure readings. Here, Cross Motor Engineering acquired the relevant information, by entering the vehicle registration number in the VTI on the Delphi Direct Evolution web portal, www.directevolution.com.

5. As pressure loss via the fuel injectors’ control valves is a common problem, a time-efficient method is to test for excessive spill (or ‘leak-off’), without removing them from the engine. The following demonstrates the procedure using two tools. The spill bottles are included within the high pressure kit (Delphi YDT732). This comprises the YTD850 (on the right), YDT410 False actuator kit (seen here on the left), and the YDT747 dummy regulator, fitted with a yellow plug, pictured in front of the box.

6. Removing the spill pipes from the fuel injectors revealed a problem, because the standard connectors do not have the facility to permit the temporary installation of the spill bottles. In this case, the YDT586 low pressure test kit includes a number of connectors that could be used, in order to complete the test safely.

7. After the engine was started and run at idle speed for around four minutes, the bottles’ contents were compared. In this case, a comparison check is all that is necessary and, as you can see, the quantity of diesel that each injector returns to the tank is roughly constant. This indicates that not one fuel injector is returning excessive quantities of fuel to the tank and causing a high pressure drop.

9. The hand unit extends into the interior to permit one-person operation. Following the instructions on the display, the engine was cranked over, until the display unit directs the technician to stop. Obviously, the displayed real-time pressure is far below the expected figure; it should be in excess of 1,000BAR. Clearly, the high pressure system is at fault but should the pump be renewed at considerable expense?

10. While the costly high pressure pump could be faulty internally and not be delivering sufficient pressure, a faulty pressure regulator causes the same high pressure drop scenario. To find out, the existing regulator can be unbolted and a dummy blank fitted in its place. Delphi’s part number for a Bosch CP4 pump regulator blank is YDT747 but this is supplied with the high pressure YDT732 kit (See Step 5).

11. The instructions on the hand unit are followed again. This time, the measured pressure leaps to almost 1,400BAR. Compared to the reading from Step 9, the difference indicates that the regulator was suspect. Once the repair is complete, do not forget to read and reset any fault codes relating to low fuel pressure that may have resulted from your tests.

12. While the regulator could have been replaced, a closer inspection revealed that its seal/O-ring had split. This was duly replaced and the sensor refitted, after the dummy blank had been unbolted, cleaned, its bung refitted and replaced back in its case, ready for another time.

13. Live data checks are worth reading again post-repair to ensure that you really have solved the problem. This screenshot, taken from a Delphi DS150 with a warm engine, shows that the rail pressure is now around 302.6BAR (compared to the initial 92.7BAR – see Step 2), with a PMW signal to the regulator being around 17%, compared to the earlier 34%. After a global check and fault code reset, the engine bay was checked for leaks and the car was returned to its grateful owner.