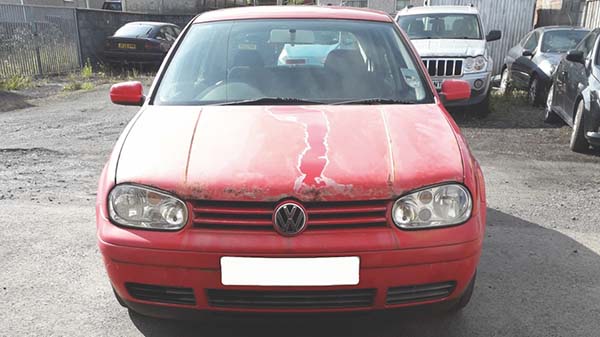 A customer brought the Golf into the workshop as the ABS light was illuminated on the dash, as well as a ‘STOP’ and brake fault indicator lights. No previous work had been undertaken apart from a recent battery replacement and the vehicle had not been driven much due to Covid 19 restrictions.

My first task was to confirm the faults with the ignition switch on, then conduct a quick visual check of the ABS system to check for anything missing, loose or damaged – it all looked good.

I then scanned the whole system looking for faults, to gather live data and have a direction to work on. The fault codes generated were:

I had seen code 00668 come up on a few occasions with some other systems, so I decided to check the battery voltage and condition. As you can see in Figure 1, the battery bus bar connection to the main electrical feeds was heavily corroded and when the voltmeter was connected to the terminal and along the bus bar the voltage readings were fluctuating between millivolts and around 6-8V. Could this be my problem? A nice easy fix… no such luck!

I removed the terminals and bus bar, cleaned, replaced and retested and had 12.4V on my multimeter. I cleared all the codes only for all the lights on the dash to reappear, followed by the codes.

I checked all the fuses to the ABS and electrical circuits that were on top of the battery – there were three ABS fuses and five battery supply fuses. On testing these, I had 12.4V either side of the fuses, indicating good supply voltage.

Figure 2: Des checked the power and grounds to the ABS ECU following the ABS wiring diagram.

I needed a wiring diagram of the ABS circuit to check the power and grounds to the ABS ECU, see Figure 2. Due to access issues on this car, I found it was easier to remove the ABS ECU connector to test it rather than to probe the wires.

On disconnecting the connector, I found green corrosion on the terminals, see Figure 3, moisture was getting in from somewhere, was this my problem?

Figure 3: On disconnecting the connector, Des found green corrosion on the terminals.

I cleaned the terminals the best I could with a small wire brush and electrical contact cleaner and the terminals cleaned up rather well. I could not take the connector apart to check the connectors as this one had a sealed connector, according to a VW specialist.

I then removed the connector for the ABS pump motor, see Figure 4, which was a separate connector, red pin 2 and black pin1 wires, and used an ohmmeter to check the pump windings which should be 1Ω. However, it gave a higher resistance reading and was outside the manufacturer’s specification, indicating a problem.

Figure 4: Des removed the connector for the ABS pump motor and used an ohmmeter to check the pump windings.

I reconnected the connector but the lights and fault codes remained, I then carried out an actuator test on the ABS pump motor and it operated correctly, which I did not expect due to the higher resistance value. I needed to check the power and grounds to the ABS ECU before I condemned it as the corrosion could have got inside the ECU and damaged it.

There were two grounds going back to the battery and two power cables from the fuses, which were battery lives and an ignition live, plus an input from the brake pedal switch.

Illuminating faults with a test light…

I used my trusted test light to check the two grounds pins 28 and 8 at the ABS ECU and connected to battery live and the ground cables – the test light illuminated brightly on both cables indicating good grounds.

I cleared all the codes and then checked the dash – the lights had all switched off and the codes had disappeared. I took the vehicle out for a road test and the ABS and STOP and brake fault indicators remained off – the vehicle was now fixed. The customer was made aware of the high resistance ABS pump motor which could be a future problem.

If you have the right information, knowledge of the system, and the correct tools and equipment, it is far easier to diagnose faults and to rectify them. There is no correct way to start any diagnostic tests, but we need to work in a logical manner. The results of any tests we carry out on any system determines the next test we need to do to complete the diagnosis and have a correct analysis of the system.