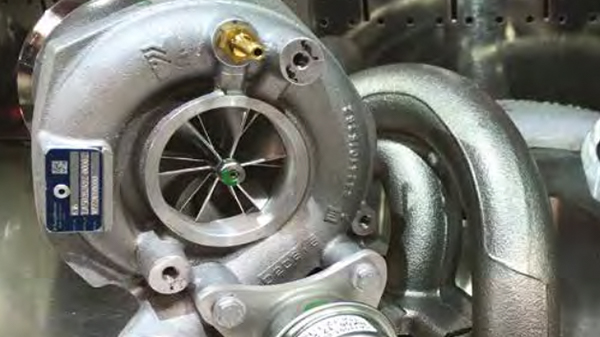 This month’s article takes a closer look at a stunning 2.0ltr twin turbo Volkswagen Transporter T6 we had in the workshop for some performance enhancements. This van was already packed to the hilt with performance and styling extras; including air ride suspension, fully customised leather interior and Bentley alloy wheels. It was already running REVO Stage 1 that takes the already formidable 2.0ltr twin turbo diesel engine from 180 bhp and 295llb torque to 210 bhp and 320llb torque.

The customer has spared no expense and wants the ultimate in performance upgrades, opting for our Stage 3 package, which includes our own hybrid turbo kit capable of increasing the power up to 270 bhp and over 400llb torque! For this upgrade we supplied and fitted a front mount Wagner intercooler, Milltek full turbo back non- resonated exhaust system and Revo panel air filter. The twin turbo package is supplied by TDi Turbos who are responsible for all our hybrid and special turbo builds.

Remember that with hybrid turbos, it’s important not to go too big on the compressor wheel when utilising the existing housing. This will result in unwanted turbo lag and make the van feel sluggish at low rpm’s. TDi Turbos are experts in getting the balance just right and have tried and tested recipes for success – this package is no exception. They utilise a much lighter, single-piece billet 7 blade impellor which spins up very nicely from low RPM and is capable of delivering over 2 bar of boost at maximum rpm!

Using hybrid turbos has its pros and cons, you will never be able to achieve massive power or boost utilising the existing turbo housing, but it will easily fit all existing fixtures and fittings including the turbo manifold, boost connections and exhaust downpipe. It’s a great way to get more bang for your buck, happy days!

We have had quite a bit of experience with hybrid turbos, some of which didn’t turn out so good, where some turbo manufacturers elected for a mismatch in inlet and exhaust turbo wheels.

One particular time springs to mind where I myself had bought a turbo from a very well-respected turbo remanufacturer for my T5 van and it literally only boost between 3.5k and 4.5k, despite wasting a huge amount of time trying to map around the problem with absolutely no success whatsoever. They got it totally wrong by going too big on the inlet wheel and leaving the exhaust wheel totally stuck. This caused a massive imbalance and the small exhaust wheel didn’t have sufficient mass or inertia to drive the inlet pressure wheel! We’ve seen many like this in our workshop, especially on diesel cars where a hybrid turbo has been fitted previously and simply cannot deliver power at low RPM’s and customers have asked us to attempt to MAP around the problem.

If you have had a correctly designed and built hybrid turbo fitted it should run fairly well using your stock ECU software, delivering boost where it normally does at given RPM and will normally over spool by approximately 2 bar towards the top end. If your hybrid turbo feels lethargic low down, the chances are it’s not been well thought-out or designed.

Always seek out a professional turbo company who have carefully developed hybrid units with specialist tuners – there aren’t many about. It’s well worth mentioning the good guys who we use, Turbo Technics and TDi Turbos, who have years of experience in high performance turbos.

After we had installed the hybrid turbo unit and all other hardware, including intercooler and exhaust, it was time to head down to the dyno for some final tweaking and mapping.

This particular software version in the ECU threw us a bit of a curve ball with a hidden torque limiter and initially we couldn’t achieve anything higher than 400 nm torque, irrespective of how much boost we ran. Turns out nobody within our specialist network has yet been able to work out where the hidden boost limiter was imbedded in the ECU, making it impossible to go anything beyond Stage 1 tuning.

I’ll be honest and say it didn’t look good at this point, especially having just fit a Stage 3 turbo with all the goodies, taking the overall spend close to £10K! This is what we call squeaky bum time.

But my confidence wasn’t misplaced and my faith in Andrew’s abilities was rewarded, who managed to eventually find the hidden torque limiter in the ECU and raise the power/torque significantly close to where we initially promised, 262 bhp and 370llb torque!

Not only have the power figures been reached but more importantly, we are firm believers in drive quality and delivery of power for everyday use.