LATEST NEWS
You are at:Home»Article»Wearing the black belt – by Rob Marshall

Like many other motor car components, the auxiliary drive has evolved considerably. With the assistance of renowned belt pioneer and manufacturer, Dayco, Rob Marshall looks at the implications and opportunities for the independent repairer.

While the earliest fan belts were manufactured from rope, followed by leather, it was found that increasing a belt’s running surface area to form a ‘V’ section reduced slippage and, therefore, enhanced reliability and longevity. Taking advantage of developments in polymer technology, rubber compounds replaced those early rudimentary materials relatively quickly.

As cars matured, the fan belt became responsible for transferring torque to an increasing number of components, although
its original role of driving the water pump (along with its power-sapping fixed fan on many earlier models) became

less prominent. The addition of more auxiliary mechanisms, from alternators to air conditioning compressors and more, demanded a rethink of the original belt design and the multi ribs, (known otherwise as Poly-V/Multi-V designs) provided
the advantages of being not only thinner and lighter but also able to provide a larger working surface area than that of the original V-belt. The added flexibility and thinner construction made the drive more energy efficient, resulting in cooler running and longer component life. Additionally, the different belts’ reverse sides could be used to drive either additional pulleys, or tensioners, as dictated by the requirements of the engine designer, many of whom prioritise keeping the auxiliary mechanisms as close to the engine block as possible.

Many early ribbed belts were produced from neoprene, a type of synthetic rubber but, unsurprisingly, technology has not stood still. Dayco, for example, makes all its auxiliary belts from Ethylene-Propylene-Diene-Monomer (EPDM), another rubber- based synthetic material, which provides additional strength, reliability, durability and quietness.

Things are not always that simple for modern cars, because so many components, even tyres in some cases, are becoming make and model specific. As Dayco works alongside the OEs, it possesses the technical expertise to advise the repairer on correct-specification replacements and fitting techniques. It is also worth noting that the company does not separate its aftermarket and OE manufacturing facilities, so a Dayco belt that you fit to a customer’s car would be technically identical to that fitted by a main dealer, where Dayco was the original factory supplier.

“With the latest models, sourcing a new belt is not dependent solely on dimensions; the original part may possess a more advanced construction – such as its internal reinforcing cord being manufactured from a different type of polyester, even aramid fibres. This engineering choice depends on its application.” 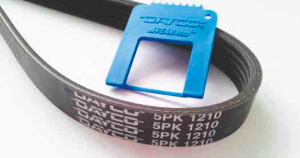 Mr Goldstone also highlighted real-world cases in which he discovered that a new belt’s part number suffix has not been checked by a garage’s supplier, to make sure that the belt’s construction matches that of the original. Even though it might fit physically, the incorrect materials used in a technically- incompatible belt can result in the overstressed new part failing after only a few thousand miles. He commented also that some belt manufacturers offer more than one belt construction for the same vehicle, whereas Dayco insists on providing a sole belt that will be fully-compatible for that application.

The consequences of a part disintegrating can be catastrophic. Apart from causing a breakdown, the flailing belt risks instigating further damage directly, not only to the expensive auxiliary components. It has been known for the engine to be ruined, should the wayward part become tangled and trapped around the crankshaft pulley, which can stall the engine and damage the timing system. The issue is not helped by certain manufacturer service schedules paying either little, or zero, attention to auxiliary belt maintenance. Some of them are more helpful, however, and provide a replacement interval.

While traditional checks for cracks and missing sections were sufficient for the old-style neoprene belt, those made from EPDM display different wear characteristics that are harder to detect. More commonly, the pulleys’ metal grooves dig deeper into the ribs as mileage builds, causing the original ‘v’ formation to wear into a ‘u’ shape. This makes assessing belt condition extremely tricky at a cursory visual glance. Dayco recommends that technicians adopt a ‘Check and Change’ procedure.

So that a serviceable belt is not replaced unnecessarily, Dayco also recommends that auxiliary belts are inspected at the recommended service intervals, especially after a timing belt change. To assist technicians, Dayco provides freely a ‘tread- depth’ type plastic tool, the ‘a-WEAR-ness gauge’, one side of which displays any side clearance evident between the ribs, the other measures how much material has worn from the ‘v’ groove. Finally, the technician checks the ribs for cracks through the tool’s 25mm square ‘window’. Should four, or more, flaws be visible, the belt must be replaced, because it is worn significantly. 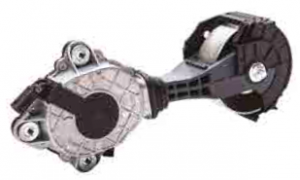 Auxiliary belts are not made from one single material. Pictured is a MINI water pump friction wheel, driven by the belt’s reverse side. This dictates a special coating is used on that running surface.

Any competent technician will be aware of how incorrect tension and pulley misalignment will decimate belt life, making it essential to view belts not in isolation but in terms of a system. Therefore, the presence and condition of any tensioners, idlers and alternator one-way clutches should be considered. 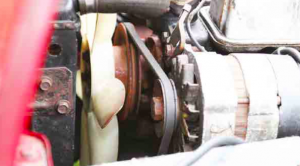 In certain cases, just like timing belts, replacement auxiliary belts may be offered as a kit but enquire with your supplier if any other components require replacing, which are supplied separately. Naturally, always insist on OE quality.

Some types are of the elastic, or stretch, variety that requires no external tensioning medium. However, Dayco insists that these designs should be fitted with a suitable special tool, so the belt is not damaged before the engine has even been started. Consider also that, once removed, this type of belt should never be refitted. Where an automatic tensioner is not used on a non-elastic drive, a suitable auxiliary belt tensioning instrument should be an essential toolbox item.

Auxiliary belts have changed considerably, in terms of materials and design, from the old V ‘fan’ belts, which tended to drive solely the water pump and alternator.

As the UK car parc stands at approximately 32 million, over half of which are aged over six years, and presuming an average mileage of 12,000, many vehicles that aftermarket technicians encounter will require an auxiliary system inspection, at the very least. Therefore, the considerable market opportunities in relation to auxiliary belt systems should not be overlooked, not only for your business but also for customer safety and peace of mind. 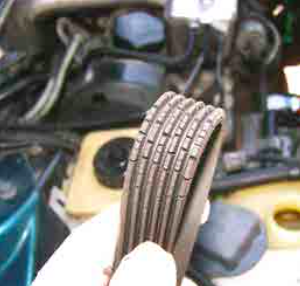 Checking for wear in modern EPDM belts extends to more than checking for perishing and cracks. The depth of the ribs also need assessing. 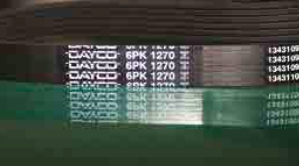