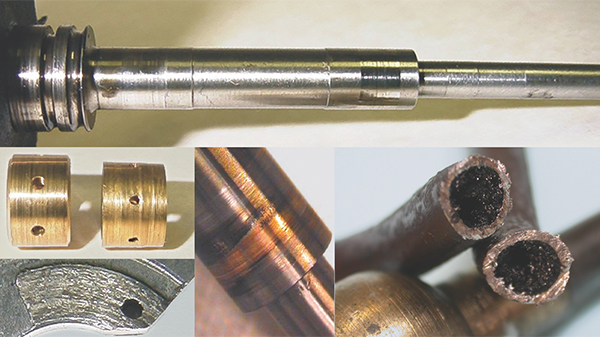 Will oil save or kill your turbo?

The right oils and additives will reduce emissions, enhance fuel economy and prevent premature wear – the incorrect oil will cause all sorts of problems, which will result in a damaged reputation!

Oil problems are the main cause of turbocharger failure. BTN Turbo – the world’s largest independent turbo distributor – explains what goes wrong and how to avoid it…
Today’s turbos are complex, but they’re still inherently reliable. Less than 1% of turbo failures are due to a fault with the turbo itself, over 90% are oil-related. Correct, clean oil is vital for turbos. A turbine shaft spins up to 6,000 times every second (an amazing 360,000 rpm), in temperatures of up to 950°C, and is protected by just a thin film of oil on the shaft bearings. Any problem with the oil will damage the bearings or oil seals, inevitably leading to turbo failure.
For over 40 years, BTN Turbo has examined countless dead turbos and this experience has clearly identified
three oil-related turbo killers: oil leaks, oil starvation and oil contamination. Any leak that cuts off or drastically reduces the supply of oil to the turbo bearings will cause problems. Running a turbo without oil for five seconds is as harmful as running an engine without oil for five minutes.
Oil starvation can be the result of leaks or other faults, such as blocked or kinked oil feed pipes, but the cause can also be outside the oil system. The oil seals at either end of the turbo bearing shaft rely on positive air pressure to keep them in place. A faulty or missing air filter, or insufficient exhaust back pressure, will result in either too much or too little air pressure, the oil seals start to leak and the bearings are starved of oil. The turbo will be damaged and ultimately fail.
Then there’s oil contamination. This isn’t simply about dirty oil. Certainly, old oil with carbon, sludge, or tiny particles of silicon gasket sealer will score the turbo shaft bearings and shorten turbo life, but contamination can also occur because the wrong oil has been used.
HELP ENGINES WORK AS THEY SHOULD
Revive boasts extensive knowledge in vehicle emissions systems, like turbos, intercoolers, exhaust gas recycling (EGR) valves, diesel particulate filters (DPF), and environmentally-friendly performance chemicals designed
to clean the turbo and improve efficiency. Revive treatments are water-based, non-toxic, non-corrosive and
non-flammable fluids, which clean engine systems that are experiencing problems caused by soot and oil
build-up. The treatment is sprayed into the vehicle’s intake system before the turbo inlet, whilst the engine is
running. As the fluid passes through the engine system it locks on to built-up, oily/carbon deposits and strips away a surface layer. These carbonated particles are carried away out through the exhaust system, without blocking catalysts and filters.
Three doses of the treatment cleans the turbo and other engine internal components, helping to restore fuel
economy, regain lost power and reduce emissions. Variable nozzle/vane technology can be a major cause of turbo problems due to sticking vanes; Revive helps remove soot and oil from the mechanism to restore normal treatment. The Revive cleaning process can be performed before a service, which allows a vehicle to be checked over and filled with clean oil.
01225 701 920
VAG-SPECIFIC MOTOR OILS
Engine lubricants play a significant role in achieving the EU emission standard regulations, currently EURO 6, which became mandatory for all new vehicles produced from 2014 onwards. Comma has introduced two new low viscosity VAG-specific oils, Eco-VG and Pro-VLL, which contribute to fuel saving and emissions reduction.
The fully synthetic Eco-VG 0W-30 has a lower viscosity, flowing more readily at low temperatures, and circulates faster around the engine for quicker protection of moving parts. It provides enhanced protection for catalytic converters and Diesel Particulate filters, fitted as standard on EURO 6 compliant vehicles. It is designed to provide exceptional piston cleaning to reduce blow-by gases passing the piston ring pack and degrading the oil.
New Comma Pro-VLL 0W-30 is a very specific, fully synthetic engine oil, suitable only for Volkswagen group vehicles requiring the VW 506 01, 506 00 and 503 00 specifications. It has been specially developed for vehicles with Pumpeduese engines running on LongLife service regimes, predominantly VW Touareg and LCVs, such as VW Transporters.
It maximises the oil change intervals according to the manufacturer’s recommendations, while the low viscosity helps to reduce friction, which enhances fuel economy and reduces CO2 emissions. These latest introductions once more emphasise the need for technicians to select precisely the right engine-specific oil for every application.
VM APPROVALS
LUKOIL Lubricants is one of the largest lubricant and gas production companies worldwide, supplying a wide range of products that meet the advanced operating requirements and specifications of vehicle manufacturers. Vehicle approvals include BMW, VW Audi Group, Mercedes-Benz, Ford and Renault. A VRM Oil finder tool is available on its website to ensure the correct oil is used. Call Platinum International to find your nearest stockist:
0161 876 3374
Tags: Failures, Oil, Oil Contamination, Oil Leaks, Oils Starvation, Turbo
SHARE THIS