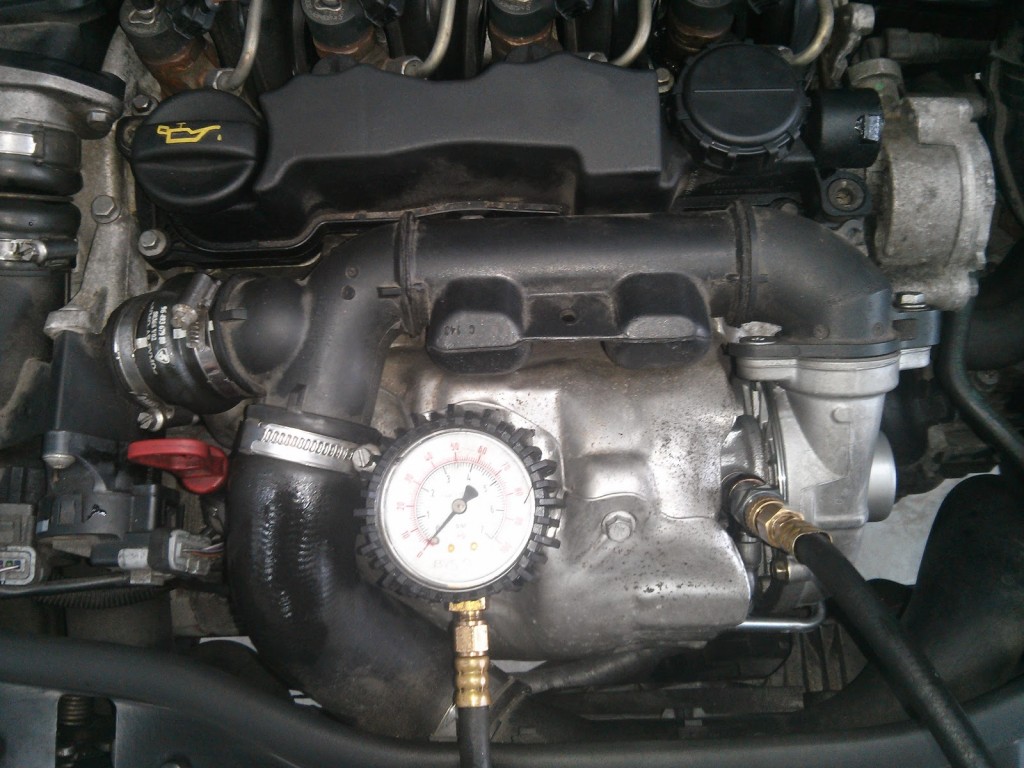 In this article, we take a look at the main root cause of turbo failure on the PSA 1.6 TDCi engine. This engine is fitted to a wide variety of vehicles with Ford, Peugeot, Mini, Volvo and Suzuki, to name but a few. A list of just a few of the common models affected are the Ford Focus 1.6 TDCi, Peugeot 307 1.6 HDi, Mini Cooper D 1.6 9HX engine and Volvo’s S80 1.6D DRIVe.

Whilst turbo failure is a common occurrence on this engine, once properly repaired, a new turbo should last many thousands of miles.

The cause of turbo failure on the 1.6 TDCi engine starts not with the turbo itself, it is due to carbon build-up and the injector seals. Once the carbon builds up in the engine oil, it will cause the gauze filter in the turbo oil feed banjo bolt behind the DPF/exhaust to block and starve the turbocharger of oil. 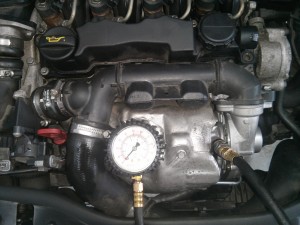 To measure the oil pressure directly at the turbo, I made a special adaptor for our oil pressure test kit. Your kit may vary so making the adaptor could be different for everyone. Here is how I connected the test kit to the turbo.

Next, I measured the oil pressure, here is the result… 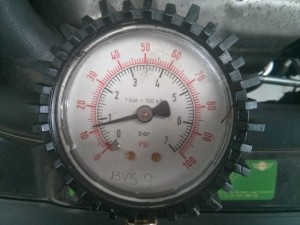 The engine oil pressure at the turbo whilst the engine was at idle was around 0.8 Bar or 12 Psi, way below the recommended 2.3 Bar minimum. It was clear this turbo had failed due to oil starvation.

Because the 1.6 TDCi engine leaves the factory with a gauze filter in the oil feed pipe bolt, the next step was to remove the bolt, remove the gauze, refit the bolt and measure the oil pressure for a second time. This step also confirms that the oil pump and oil pick-up are in good working order. Here is the result from the second oil pressure test… 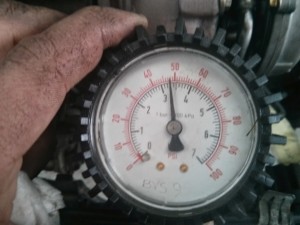 The resulting oil pressure with the gauze filter removed was 3.4 Bar, which is more than acceptable for the PSA 1.6 TDCi engine.

In this case, the oil feed pipe was replaced by another garage before. However, they failed to take the correct steps and remove the gauze filter after 30 miles, they also failed to replace the injector sleeve oil seals and clean other traces of carbon from the engine, which resulted in the new turbo failing within two weeks.

Next, we replaced the turbo and followed the instructions that came with it. The main points of which I have listed below:

All the above points are critical actions you must take to ensure that a new turbo will last for thousands of miles. However, I missed one point and it is the most important part, as this is what will have likely caused the carbon build-up in the oil that ruined the turbo in the first place, and that is the injector oil seals.
The number one cause of turbo failure on the 1.6 TDCi engine is the build up of carbon around the injectors and the eventual failure of the injector oil seals. This is due to the injector sealing copper washer failing, resulting in carbon build-up in the injector sleeve. This rots the injector sleeve oil seal; carbon gets into the engine oil and will eventually cause turbo failure. 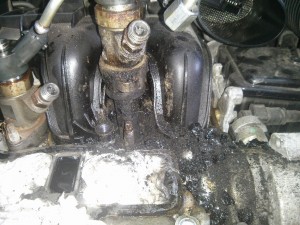 Carbon build-up around no.4 injector

Here is an image of the build-up of carbon around number 4 injector, in this case.

Once the injector is removed, it becomes clear how the carbon builds up in the injector sleeve, compare this with injector number 3… 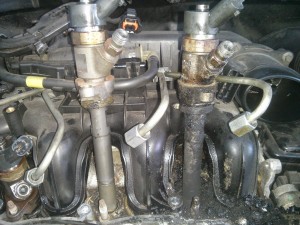 If we compare this to the seal on injector sleeve number 3, it is obvious that the seal on the forth cylinder was damaged sufficiently enough to allow carbon into the oil system, see image on right. 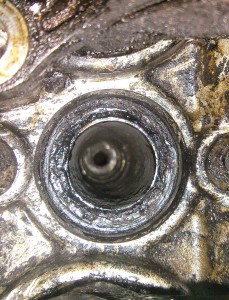 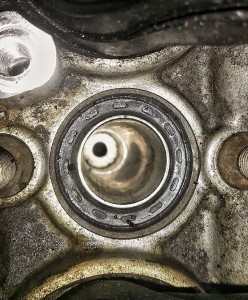 With the seal replaced, the injector sleeves and injectors cleaned, injector copper washers replaced and the injectors refitted, all that was left was to put fresh oil in the engine.

The final, critical step was to drive the vehicle 30 miles and then strip and remove the gauze filter from the banjo bolt on the feed pipe to the turbo. The oil and filter was then replaced again and the vehicle road tested a further 50 miles.

It is recommended that after the turbo is replaced and the above procedure is followed to correct the original cause of turbo failure, the oil and filter should be replaced every 3,000 miles.

I hope this helps anyone that has experienced turbo failure on the 1.6 TDCi engine.