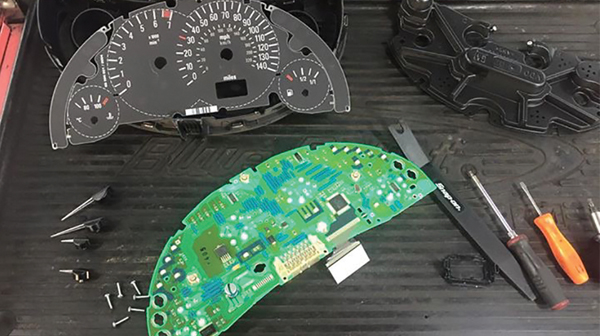 I wanted to share with you a couple of recent fixes that came through our workshop in the past month or so. None of them required highly expensive test kit or any over-complicated diagnostic procedures, but each of them demanded a full understanding of the fault from the customers point-of-view, knowledge of the system being tested, either remembered or researched, and careful questioning of the customer about the symptoms of the fault.

A regular customer had brought their 2003 Corsa C into the workshop twice before, complaining of all electrics failing. After previous attempts to investigate the fault, but not being able to recreate it, this time I had a five to ten-minute chat with them, asking exactly what happened, when it occurred as well as details such as road surfaces, time of day and the weather – all the pieces of the jigsaw that make-up the bigger picture, in an attempt to make this their final visit with this fault.

The actual fault was a total loss of the instrument panel information; no speed, illumination, coolant temp etc. Armed with this information, and the knowledge that previously we replaced a battery which we found in poor condition and that had stopped the fault for a few weeks, I investigated the fault. A code read first revealed a CAN network fault on several ECU’s relating to loss of communication from the instrument cluster. As it fitted in with the symptoms, I decided to remove the instrument cluster to check the connections. After stripping the unit carefully and checking for dry or failed solder joints, I cleaned the circuit board. Once refitted, I cleared the fault code and returned it to the customer for them to carry out the extended test drive. The fault has never returned and we have a happy customer. Before removing the instrument cluster, I had a conversation with the customer about sending the unit away for additional circuit testing, but with a potential 10 day wait without the vehicle, it was decided that a thorough check and clean by ourselves would be the best and quickest option, which they are very glad they chose.

Tempted to turn work down

I don’t usually turn down diagnostic jobs, but when I was asked to fix a non-opening electric soft-top on a 2003 BMW Z4, I have to admit I wasn’t looking forward to it! But because it was for a regular customer I agreed, on the condition I wouldn’t book it in without sourcing a wiring diagram and that it may take a billable 2-3 hours to thoroughly test the circuit and formulate a repair plan, which was agreed upfront.

Once the wiring diagram was sourced, via the very helpful guys at the RMI technical helpline, I had the car brought in. Starting with basic checks first, the fuses were fine so I moved onto the motor, which is located in the n/s/r corner of the boot. The vehicle must have had a rainwater leak at one point, because the relay plate and relays were corroded. Without jumping to conclusions, I continued testing of the circuit using the wiring diagram. I could tell from the schematic that this system requires ignition on, foot on the brake and micro switch in the roof to be activated in order for the roof control switch to have a completed circuit. With this in mind, I tested the circuit and found the ‘down’ control relay to have no signal from the switch to activate it, but the ‘up’ control did, but still nothing worked either-way!

I decided to test the control relays, as they were simple 5-pin relays, which I could bench-test with an Ohms meter and power probe. Both relays, although a bit corroded, worked, so I cleaned and refitted them. Next to be tested was the motor – a simple hydraulic pump, which rotated one-way or the other depending on which relay supplied its signal. I directly fed power to the motor, with no movement – the motor was burnt-out. So I knew why the roof wouldn’t close, even though the signal was present, but why was there no ‘open’ command? I removed the switch to test further. Again, using the wiring diagram, I checked the switch and found no signal was present. My conclusion was that the switch had shorted-out in the open position, but because the roof had been mechanically locked-down it had burnt out the motor. With a new genuine pump costing £500 +VAT, a second-hand unit was sourced and a new switch was supplied. Once fitted, everything worked as it should.

It’s all about the prep

In my experience, if you don’t make an effort to prepare for a diagnostic job then you can make it harder to complete the task within a reasonable timescale and at reasonable cost. This ultimately can put you and your workshop under pressure, and risks damaging the relationship with your customer and your reputation. As the old saying goes, “If you fail to prepare, then prepare to fail”. I haven’t met a customer yet who isn’t willing to answer my many, varied, carefully-worded questions, in order to aid a correct first-time diagnosis.